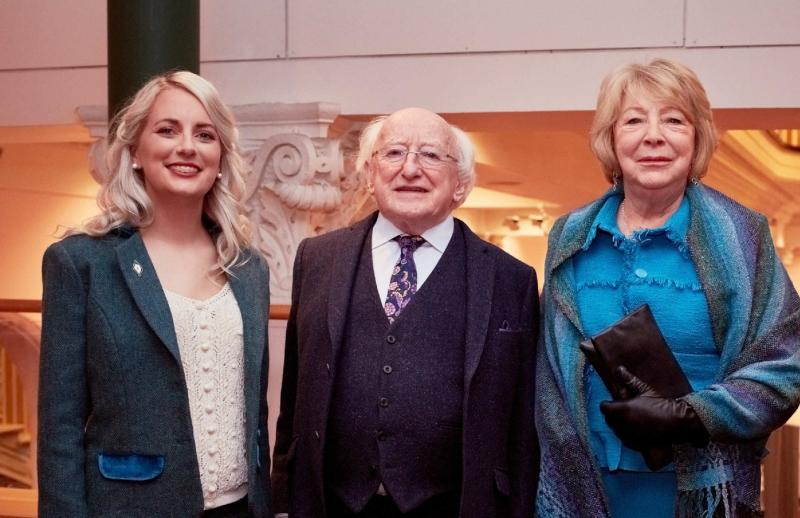 Leitrim dancer, choreographer and cultural producer, Edwina Guckian has been honoured with an Outstanding Contribution award at this year's Gradam Ceoil on TG4.

Hailing from Drumsna, Edwina grew up in a household surrounded by traditional music and dance, her style is greatly influenced by the local music of Leitrim and Roscommon. She has performed with artists and groups including Altan, De Danann, Dervish, Máirtín O’Connor, Frankie Gavin, Kíla, Martin Hayes, Séamus Begley, and Laoise Kelly. She began teaching dance at age 16 and in 2004, she founded Áirc Damhsa Culture Club – a traditional dance club for children and young people.

Edwina is also the Artistic Director of Leitrim Dance Project and has produced events focused on traditional arts and dance. In 2020 and 2021, she managed the Modern Day Mummers project, where she – along with singer Fionnuala Maxwell and accordionist Brian Mostyn – visited the homes of elderly people across Leitrim, dancing, playing music and performing.

The project aimed to revive the mumming tradition and break the social isolation experienced by many elderly people during the pandemic. Other recent projects include Devil in the Feet, a documentary on the history of Irish traditional dance (2021); Sowing the Seed, a project aimed at reviving the customs and folk traditions of Ireland associated with straw (2021); and in November 2020, she featured in an episode of the Irish Traditional Music Archive’s Drawing from the Well online series.

The highly anticipated live awards show, was hosted by TG4 presenters, Doireann Ní Ghlacáin and Páidí Ó Lionáird, featured live performances from the seven Gradam Ceoil 2022 recipients, who were recognised for their talent and contribution to traditional Irish music.

A range of VIP guest presenters also took to the stage to present the recipients with their awards these include President Michael D. Higgins, Stephen Rea, Mary Black, Liam O’Connor, Vincent Woods and Lillis Ó Laoire. If you missed it you can watch the full concert on the TG4 player at  www.TG4.ie