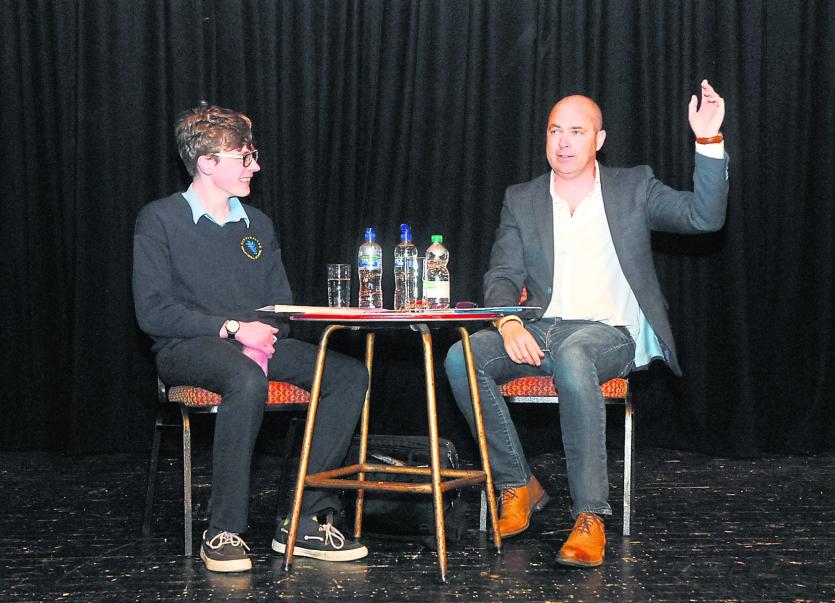 Bestselling author Donal Ryan visited Carrigallen Vocational School senior cycle students of English to discuss their work and speak about his own writing experiences last Thursday.
The visit arose after Donal received a selection of writings based on his novel ‘The Spinning Heart’ from some of the Leaving Cert students. The students had read this novel in class as part of their Leaving Cert English course and as a follow up creative task, each one was assigned a minor character from the text who is briefly mentioned, and they had to write a chapter for this character, telling the story from their point of view.
The students then sent on some of these writings to Donal who is currently Professor of Creative Writing at the University of Limerick. He was so impressed that he immediately contacted English teacher, Sarah Donnellan, and said he would really like to visit the school to meet these young writers.
The visit took the form of an informal interview on the stage of the Corn Mill Theatre between Ryan and Leaving Cert student David Rawle. Ryan told the assembled students how impressed he had been by their writing styles and their character development. He said he is often criticised for his inconclusive ending to the novel, so he was especially impressed at how the students imagined possible endings.
Ryan spoke at length in an informal and humorous way about his own school experiences, how people and situations influenced his writing and how he came to write his debut novel ‘The Spinning Heart’. He provided the students with some sound advice on ambition, doing what makes you happy and the value of reading.
He said that he would treasure the pieces of writing sent to him and had discussed them with other authors. He has visited many schools, he said, but was especially excited to visit the impressive young writers of Carrigallen Vocational School.
School Principal, Mr. Declan Conboy, spoke at the end of the interview saying that while he had attended many excellent school occasions in the theatre, this had been one of the most enjoyable 45 minutes that he had spent there. He commented on the easy ‘banter’ between Donal Ryan and student David Rawle and how they seemed like two old friends having a light hearted chat which made the interview very engaging and enjoyable for the audience.
Visits such as these, when students get the opportunity to come face to face with the authors of texts that they are studying, are invaluable learning experiences. They demystify writers and the writing process and make it seem more accessible for students, not only from the point of view of exams but for those who may be considering a career in writing.