Seán was married to Carol and they had five children, 14 grandchildren and 7 great-grandchildren.

He was a well known and popular member of the Allen Gaels Golf Society and travelled with them all over the world.

A decorated Army veteran, Seán was afforded the honour of a military salute at his graveside. 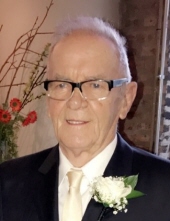 Sean was a proud member of Local 147, owner operator of Reynolds and McPartland for over 30 years. Painted many newly constructed homes throughout the southwest suburbs. Sean retired in 1999.

Sean was a founding member of Gaelic Park. He was an avid golfer and traveler. Proud member for over 45 years of AA where he ran meetings 3 times a week. Helped and sponsored numerous members. He hoped he gave as much to the AA program as he received. His true impact would be impossible to be measured.

Longtime parishioner for over 50 years at St Patricia Church.

Not bad for a guy that came over on a boat from Ireland at 18 years old.