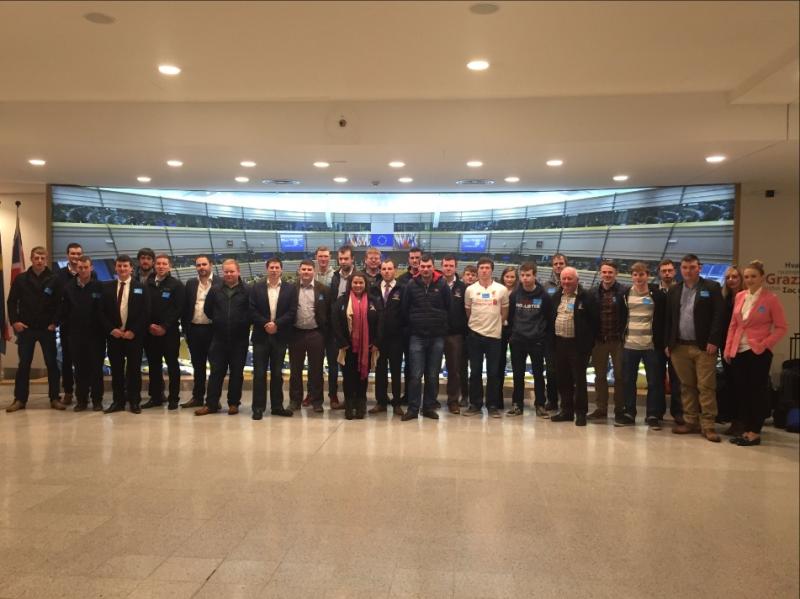 Two young farmers from Leitrim  Davis Wilson and Ciaran Clancy joined a delegation of over 30 from agricultural courses in colleges across the Midlands and North West in Brussels this week hosted by Sinn Féin MEP Matt Carthy.

Ballyhaise, Mountbellew and DKIT were the participating colleges, but the delegation also included farmers who had finished their studies, as well as some of their lecturers.

Members of the young farmers organisation Macra na Feirme were also part of the group. The farmers from Leitrim, Louth, Galway, Donegal, Monaghan, Cavan, and Kilkenny were all in their 20s.

Speaking after the visit, Matt Carthy said, “I was delighted to have an opportunity to host this delegation of young Irish farmers to the European Parliament in Brussels. It was an important chance for the farmers themselves to gain a better understanding of how the decisions that affect their lives are made and also for me to engage with them to ensure that I can better serve Irish farmers in my role as a member of the Agriculture & Rural Development committee.

“During the visit the group met with a representative of the European Commission to discuss future policy developments in the area of Young Farmers. They obviously pressed the need to protect the Irish family farm model in all EU policies and their need for additional supports for new and young entrants coming into the sector.

“Small, peripheral rural areas such the West Coast of Ireland are in severe difficulties as a result of very bad policies emanating from the EU and inequality that these policies have driven. It was therefore hugely important for the group to get an opportunity to meet EU policy makers and to outline the realities of farming in Ireland.

“These delegations are all about bringing people closer to the site of decision making so that their voices can be heard.

“I was pleased also that the delegation had an opportunity to interact with Liam McHale, the IFA representative in Brussels, to spell out their concerns as young farmers. There was also a specific discussion on Irish interpretation of EU schemes which, in many cases, are overly burdensome despite more flexibility provided than our own department would like to admit.

“The delegates themselves made several important proposals for improvements in the way EU and Irish government affect young farmers. I will be bringing many of these proposals forward in upcoming CAP reform discussions.”