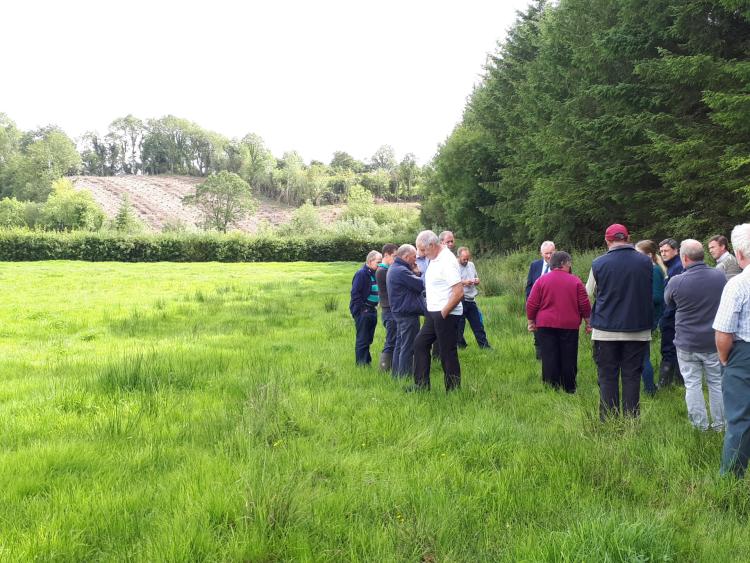 The shadow of forestry is an area of primary concern for farmers.

Planning problems, the proliferation of forestry and falling farm incomes are just some of the challenges facing farmers in Leitrim says local members of the Irish Farmers' Association (IFA).
Last Thursday IFA President, Joe Healy; Deputy President, Richard Kennedy and Director General, Damian McDonald toured Leitrim, meeting with local branch members and seeing first hand the issues farmers are facing.
The first stop on the schedule was a visit to the farm of Adrian Kelly. Adrian is Chairperson of the Cloone IFA branch and he recently had to purchase a home six miles away from the family farm because he could not get planning to build a house.
Adrian, who is getting married in a few months, said he had no option but to buy a home in Aughavas or face renting a property in Carrick-on-Shannon.
“My brother went for planning for his house before 2009 on the family farm but now you can't get permission to build because of the soil. You won't pass the T90 soil test,” pointed out Adrian.
Although there was the possibility of engaging with a pilot programme testing a zero discharge waste water treatment system to secure planning, Adrian said the costs were simply too prohibitive.
“That (waste water system) is €55,000 in the ground before you even put down a block or pay the cost of actually building the house. That's impossible to afford and there's no guarantee the system will work,” he said.
While his parents had offered to move out of the family home to allow Adrian to move in with his wife, he said he couldn't agree to that and was left little option but to purchase six miles away from the farm.
“It’s six miles from the farm. I don’t know how you calve cows six miles away. You’d want a long rope,” he said.
He acknowledges his situation is far from unique, especially here in Leitrim where nearly 90% of the land will not pass the T90 test.
Adding to stress of farming, Adrian says the proliferation of forestry is causing huge problems, not just for young farmers who want to expand their farm enterprise, but also within rural communities where “it's trees replacing people.”
“Our main problem in this parish is forestry. The lower side of the parish is around 70- 90% covered in forestry,” he said.
Taking the Director General and Deputy President to forestry bordering his farm he pointed out the forestry was planted in the 1980s and was right up against his boundary.
“You can see for yourself that a large part of this fields is constantly in shadow,” he said.
“The field is wet and no matter how many drains you put in you can do nothing with it,” he said.
“There hasn’t been a pound turned out of that (forestry) since 1987 (when it was planted) on this side (of the hedge) here we’re going into the co-op and we’re buying wrap and we’re buying diesel and you all know that for every euro a farmer gets he generates €4.27. What benefit if the likes of that forestry to anyone but the person pulling the grants off it?

There has to be a better option for Leitrim

“There has to be a better option for Leitrim (than forestry). There has to be something better than that. You can see that there’s no future for us here if more and more of this land around here is planted. We won't be able to farm it and we can't compete with the prices being paid for land by forestry companies,” Adrian said. 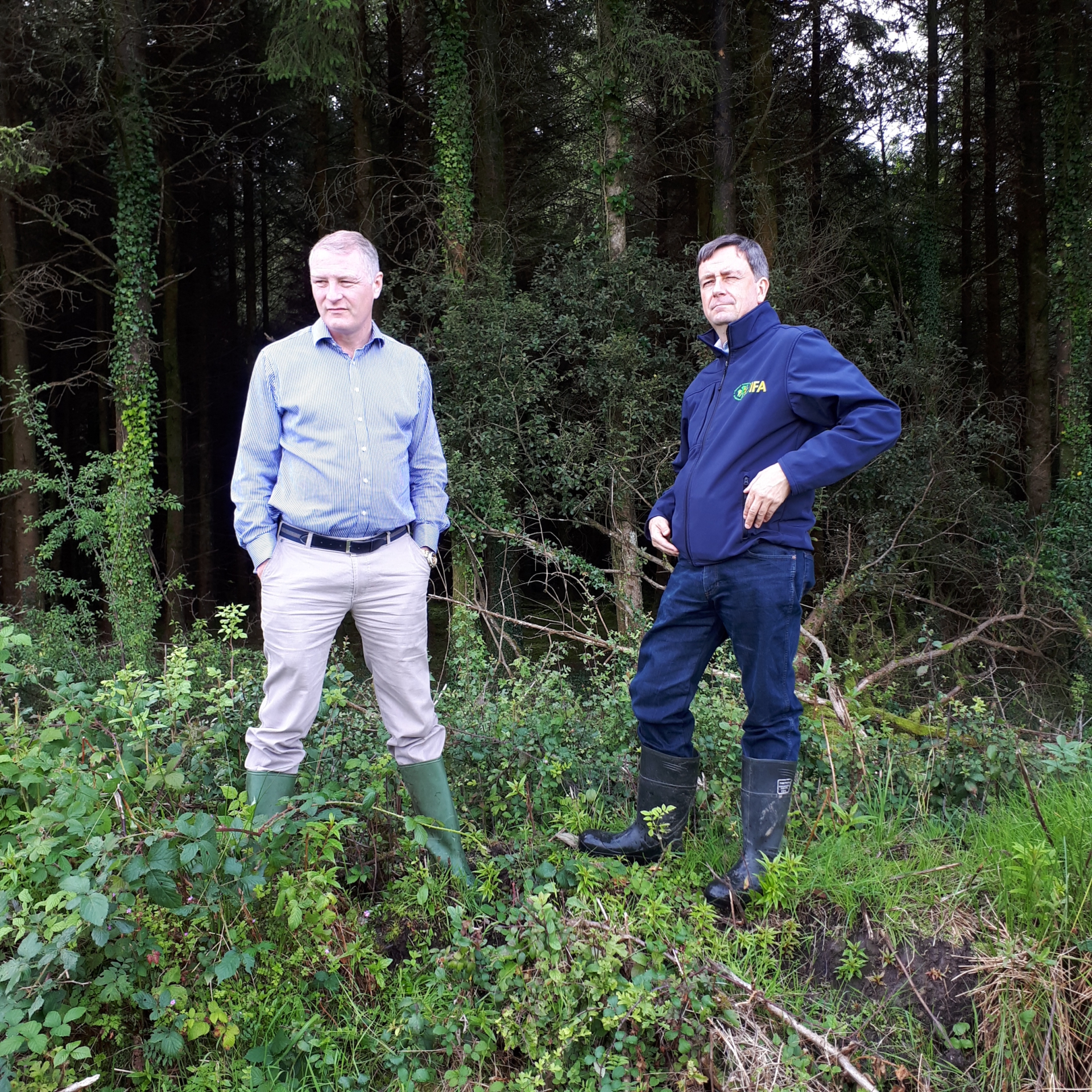 Sligo-Leitrim Deputy, Martin Kenny and Director General of the IFA, Damian McDonald, are pictured during the visit to the farm of Adrian Kelly last week, near Cloone.

He argued that active farmers in areas like Leitrim should be paid the same level of grant as those paid to forestry.
“We do more for our communities. We, at least will go out and spend the money we get. What will that forestry do for any community other than empty it?”
Co Leitrim Executive Chairperson, James Gallagher, said he had taken the Director General up to a high point in the locality to get a view of the impact of blanket forestry.
“This isn't something just impacting South Leitrim it's in North Leitrim as well. It's very hard to say to someone not to plant when the payments are so good, but the long term impact for land and for communities is devastating,” he said.
“I welcome the fact that the Director General, President and Deputy President are here in Leitrim to see what is happening for themselves.”
Deputy Martin Kenny, who jointed IFA members on the day, said the situation was very disturbing in Leitrim, especially in regard to the proliferation of Sitka Spruce plantations.
“The argument that these trees are being planted for carbon sequestration is absolute nonsense,” he told our reporter.
“Sitka Spruce is the worst tree you could plant for this. In fact, low intensity farming is better for carbon sequestration than forestry so it is baffling that more isn't being done to support small farmers instead of just paying big money to forestry.”
His fear for his local community is echoed by a lot of people in South Leitrim.
Seamus Tiernan is principal of Aughavas National School and comes, himself, from Cloone.
He points out that unless young people are able to build in the area and move to rural communities these communities will die.
“We are trying to get more students in Aughavas National School in order to save a third teacher but it's almost impossible because there isn't enough housing and no one can get permission to build,” he acknowledged.
Seamus is also a member of the committee who successfully developed the Cloone greenway - Bothar Na Naomh.
“It was LEADER funding which started this project off. These projects are the sort of things that are important in building a community and being able to get planning permission to build in your own local area is also an important part of sustaining communities.
“If we can't facilitate young couples who want to live here and raise families here then all we will be left with are older people and eventually our communities will die out. That's a fact,” he said.
“Only a few years ago we had three schools in the parish of Aughavas and now we have only one and we're fighting to keep teachers.
“Definitely we're seeing more and more plantations of forestry, of Sitka Spruce, and those places where once families lived are gone forever. Along with that we're also losing a huge amount of local knowledge in farming methods.
“People always accuse IFA of being for the bigger farmer and that the Association doesn't cater for the small farmer. But if something isn't done now by the IFA, to ensure the future of small farmers in places like Leitrim then there will be no rural communities here in 20 or 30 years.”
Maureen Murray, Treasurer Leitrim IFA, warned that unless things change there might not be county officers in Leitrim in the coming days (near future).
“The Department of Agriculture has to make huge decisions about the upcoming Budget and we are also going into a new round of CAP. Farmers are under serious pressure and the IFA has to act now,” she said.

Time for other counties to pick up the slack
Sean McLoughlin, Chairperson of Aughavas IFA branch, said the urgency of the situation facing farmers in Leitrim could not be underestimated.
“I am on the Save Leitrim Committee against forestry and we've stopped 1,600 acres of land in Co Leitrim being planted and we have objected to felling licences because bonds haven't been paid and we have no way of guaranteeing that any damage to our roads will be repaired,” explained the IFA Branch Chairperson.
He said that initial investigation by Save Leitrim had revealed that Coillte owned nearly 800 folio numbers in north Leitrim and work was only just beginning on establishing the ownership of forestry folios in south Leitrim.
He said that already there were indications that overseas companies were buying forestry in Leitrim and taking the money of Irish taxpayers out of the country, leaving land with no option but to be replanted again and again.
“There is no value added for land in forestry. If anything it takes from us. It takes from our communities and from our future,” he argued.
“Our communities are dying on their feet because of forestry, in particular Sitka Spruce and it has to be stopped.
“We are nearly at 19% afforestation in Leitrim. It is time for other counties to pick up the slack.”