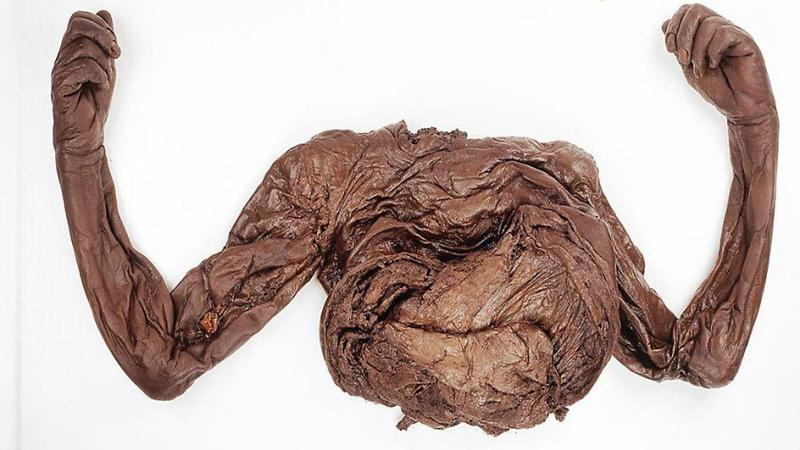 In 2003, peat worker Kevin Barry made an amazing discovery as he was digging a drainage ditch in  Clonearl  Bog. A 2,000-year-old male torso emerged, perfectly preserved by the bog environment.

The finding of such a bog mummy is extremely rare and important and so the State Pathologist and archaeologists  moved quickly to examine the body and  findspot, and move  to have it  examined and preserved.  Forty experts from six countries were involved in the multi-disciplinary team examining the life, death, lifestyle, society, climate and countryside in which this man lived.

On the walking tour you can follow in the footsteps across the landscape where this ancient king lived and died.  The remains of  Oldcroghan  man  form  a central part  of  the permanent exhibition ‘Kingship and Sacrifice’  on  display at the National Museum of Ireland.

On the  walking  tour, entitled  Oldcroghan  Man- Triple killing of  Kings’ you will explore the fascinating story of the find and preservation of this uniquely-preserved iron age King. The history of the area and of the iron age society in which he lived and died will be explained.

On the six-kilometre hike on volcanic hillside, country road and bog, you will visit the inauguration site of chieftains  and kings of Offaly going back to antiquity and visit the  bog where  the body of  Oldcroghanman  was found where it had been  sacrificed  to a long-forgotten goddess.

Along the way you will stand over the site of a passage tomb, see the site of archaeological finds from the Stone Age, Bronze Age and Iron Age.  Your guides areDamian  Lawlor  and Miriam Ryan, who combine  a passion for history  with  local knowledge. As well as the sites mentioned, you will explore the story of  Oldcroghan  man by exploring the how  the  bog environment held its secrets for 2000 years, and how the  Oldcroghan  story fits in with other Irish and European bog bodies.

Join us as we follow the 2000-year-old story of  OldcroghanMan across ancient Volcano, country road and  bogland.  Great views, beautiful countryside, and a fascinating story going back 2000 years await. Please wear sturdy shoes and bring something to drink.  Cost is €12.50 per person and may be booked in advance at the link below.