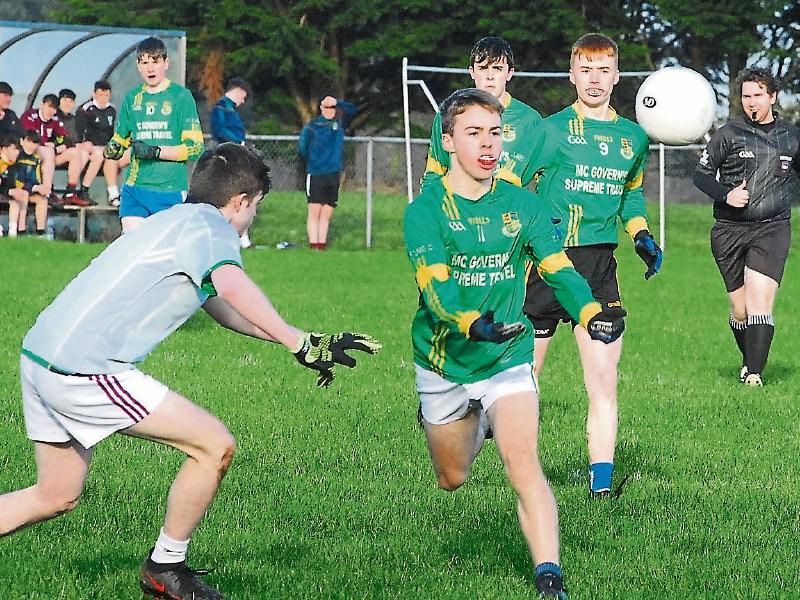 Goals win games and so it proved in this intriguing The Mezzino.ie Connacht Senior C clash in Coola last Wednesday as the home side struck for two goals in the space of a minute that killed off a brave effort from St Clare's Manorhamilton.

St Clare's had looked a class apart in the first half as they controlled much of the contest but a failure to drive that dominance into scores on the board proved their undoing in the second half when Coola came out with the benefit of the wind.

Even then St Clare's were holding firm after an early Coola onslaught led to four unanswered points but two goals in the space of a minute right before the second water break proved too big of a handicap for the Leitrim school to overcome.

If St Clare's have regrets, it comes with those two goals and the fact that they were missing six first choice players through a variety of factors, including injury, the biggest loss of all being 2021 Leitrim minor Barry McNulty and it is not hard to see why.

Coola's Kyle Davey ran the show in the middle of the park, even when they were struggling, but you'd imagine that if McNulty was available, the Sligo minor's influence would not have been as great, let alone what impact the Glencar Manor clubman would have had on the scoreboard himself.

In fairness, Coola kept themselves in the game and when the time came to strike, they do so in a manner that St Clare's could just not copy and that was the winning and losing of the game.

In fairness, with many of these players still eligible for the school's Junior team, St Clare's have the talent to make an impact at that grade if they perform to this level.

St Clare’s got off to a quick and impressive start with four points in the opening six minutes as Eoin Moyles, Diarmuid Giblin, Clive Moffatt and Eanna Clancy (free) were all on target as Coola struggled to deal with their pace and quick movement.

Sligo Minor Kyle Davey gave notice of the part he would play in the game when he hit a difficult free from over 50 yards against the wind over the St Clare’s bar but good work from Tom Hughes set up Moyles for his second of the game on 12 minutes.

Both sides missed good chances, St Clare’s probably the more guilty but Coola had some bad wides too and when Davey added a second free on 17 minutes, there were just three points between the teams.

Clancy added a free before Conor McMorrow scored from a mark for Coola on 20 minutes. However St Clare’s were left ruing some missed goal chances with Moyles unfortunate to drive a good chance wide.

Moffatt and Clancy both added frees before the break to stretch the St Clare’s lead to five points while the impressive Sean Sheridan did well to bat out a dangerous high Coola ball under pressure, leaving the Manorhamilton lads 0-8 to 0-3 ahead at the break.

The change of ends seamed to provoke a change in form for both teams as Coola copied St Clare’s start at the beginning of the game by hitting four unanswered points, Davey from a fifty and a free, Conor McMorrow from a free and Dylan Gabbidon pointing after Sheridan did extremely well to claw a dipping shot away from under his crossbar.

That meant that St Clare’s lead was down to just a point within five minutes of the restart but an off-the-ball foul on Donnacha Maguire led to a successful Moffatt free and it seemed as if the Leitrim school had weathered the storm as Coola started to find it difficult to get scores.

Unfortunately when they did eventually break through, it was with two match winning goals in the space of a minute and right before the water break - first Conor McMorrow set up Daire Callaghan for a close-in finish before a superb team move that started in their own full-back line and that went through about 10 to 12 passes ended with McMorrow blasting to the net.

Suddenly, St Clare’s two point lead was now a four point deficit and while you felt that they could overcome one goal, the second goal paved the road to victory for Coola.

Eanna Clancy converted a free but a more confident Coola saw Davey fire over from distance. Tom Hughes burst through to score from about 35 yards but a brilliant McMorrow free from out near the sideline cancelled the goal.

With Coola’s confidence soaring and a tiring St Clare’s unable to generate the chances they needed, two Davey frees completed the scoring and a victory for the Sligo school.