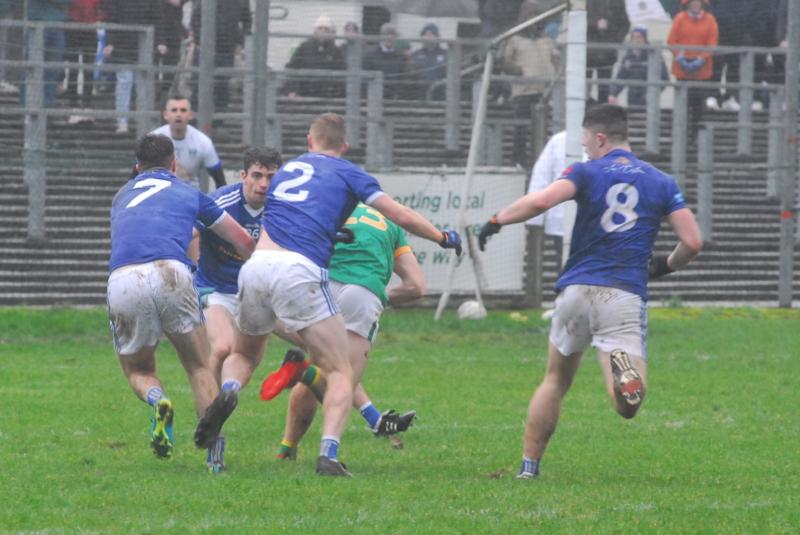 Rare to find two sets of fans going home relatively happy after an Allianz NFL Division 4 game but a battling performance from Leitrim against Cavan certainly lifted the spirits of the Green & Gold fans in Avant Money Pairc Sean Mac Diarmada on Sunday.

With the famed venue boasting it’s biggest League crowd in quite some time, there was a great atmosphere for the opening game of the League but it was Cavan’s strength and experience that won the day against a battling and much improved Leitrim.

Andy Moran’s first game in charge might have ended in disappointment but there is much to build on with huge energy, great enthusiasm and a structured game plan featuring a defensive unit that was much harder to open up.

However, a tendency to concede frees, no matter how annoyed Leitrim fans were at the decisions of referee Sean Longeran, meant that Cavan keeper Raymond Galligan emerged as the match winner along with the impressive Paddy Lynch, both hitting five points from play.

Galligan did most of his damage in the first half with four points from placed balls as the Breffni men played against the strong wind but still went into the break a point to to the good. That, in simple terms, was the winning of the game as Cavan just had that little bit too much for Moran’s troops. 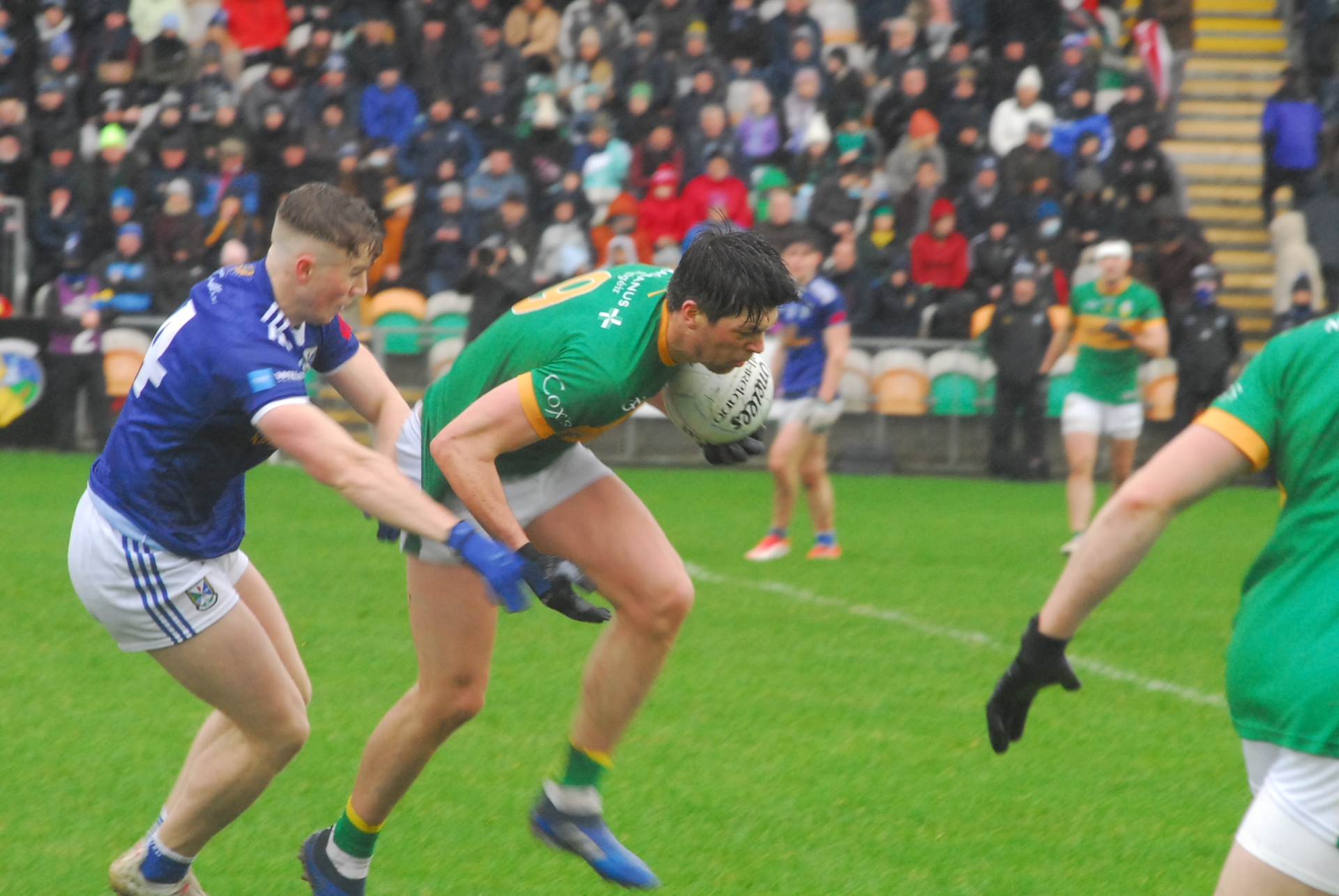 Yet for all that, there was plenty to enthuse about for Leitrim fans and plenty to work on. Tightening up on conceding frees will make the Green & Gold so much harder to beat but scoring just three points in the second half is never going to be enough to win you a tight League game.

After a  poor wide from Mark Plunkett, Leitrim opened the scoring when Keith Beirne punished a foul on himself by converting the free on three minutes. A fast vibrant Leitrim saw Darragh Rooney’s shot held by Raymond Galligan who then went upfield to thump a 50 yard free into the howling wide narrowly wide.

From the kickout, Mark Plunkett made a great catch and quickly fed Keith Beirne who broke through the tackle to fire over as Leitrim went two up. Cavan responded with former Leitrim Vocational Schools player Jason McLoughlin surging upfield on a long run that was ended by a David Bruen foul with Paddy Lynch converting the free on nine minutes.

Beirne saw a shot fall short, well gathered by Gallagher while Paddy Maguire was yellow carded for an off the ball clash. Leitrim were creating chances but weren’t finishing as Mark Plunkett drove a shot across the goal and wide.

Galligan then curled a wonderful free in that many Leitrim fans were already jeering as going wide but the ball drifted inside the post to tie the scores on 16 minutes. Paddy Lynch put Cavan in front for the first time two minutes later when he finished off a great move with a good point.

Galligan, Oisin Kiernan and Conor Madden all missed chances with Keith Beirne also off target before another long range Galligan free was answered seconds later when a Cavan player dropped the long ball, Ryan O’Rourke pounced on it to set up Darragh Rooney for a great point.

Cavan hit back with two Galligan frees on 30and 34 minutes but Leitrim finished the half strongly with a Beirne free and a good point from Darragh Rooney, set up by good work from Riordan O’Rourke, leaving the halftime score at 0-6 to 0-5 in favour of Cavan.

The goal chance Leitrim were looking for came just a minute into the second half as a quick break released Ryan O’Rourke but as he bore down on goal, the Fenagh St Caillin’s clubman seemed caught in two minds between going for goal and a point and his shot went badly off target. 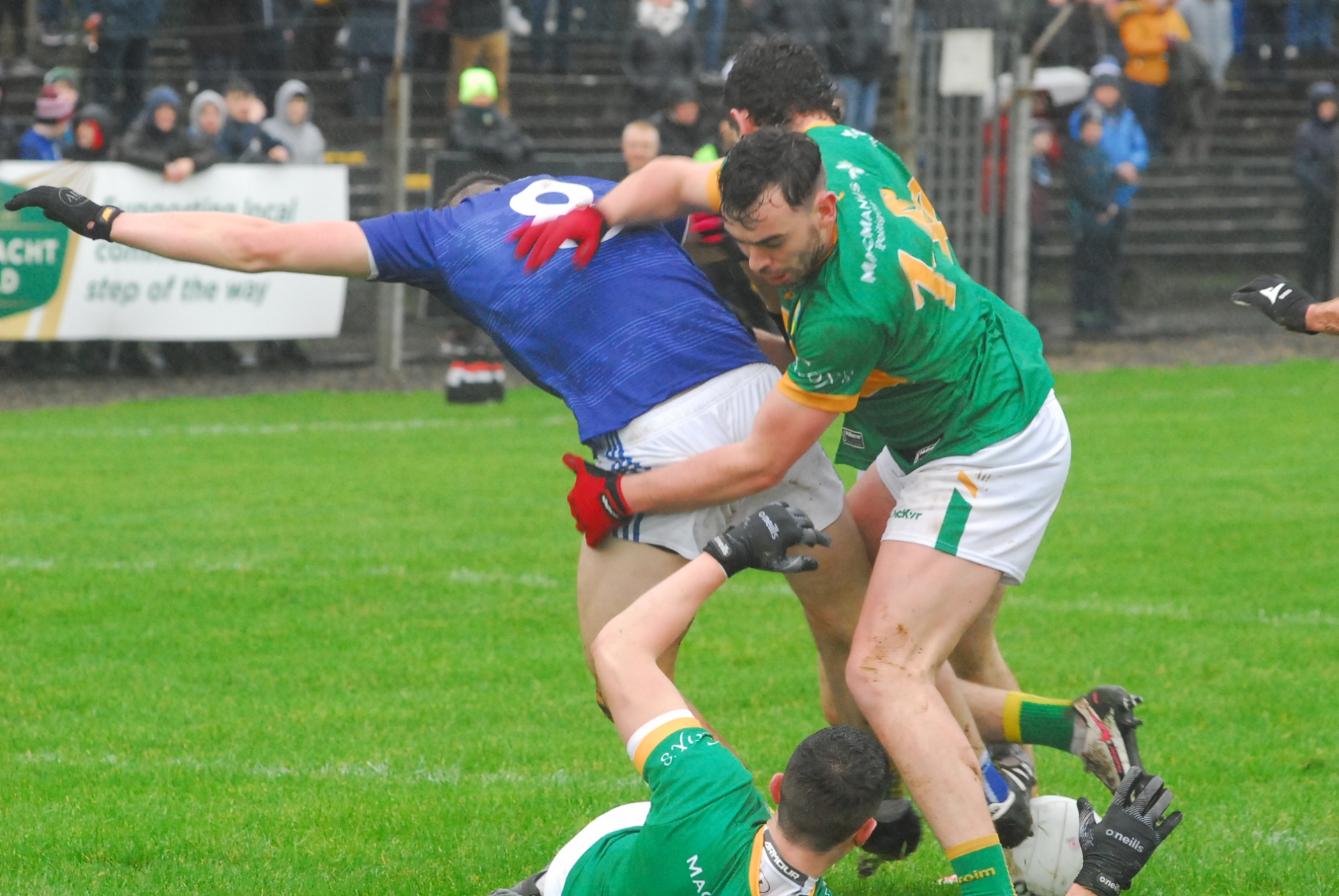 Cavan full-forward Paddy Lynch was beginning to show his class, finishing off a good move from the right corner with a fine point but Leitrim, as they had done in the first half, hit back in a burst. Keith Beirne put over a free before Dean McGovern got on the end of a good move to fire over on seven minutes.

Cavan were dominating possession but not getting the scores to reflect their dominance with sub Conor Smith seeing his shot hit the upright and go wide. Galligan did convert a fifty but it could have been worse had Donal Wrynn not knocked the ball from Padraig Faulkner’s grasp.

The post intervened on Cavan’s behalf too when Jack Heslin’s shot came off the woodwork but Cavan stretched their lead with a point from Cormac O’Reilly. The visitor’s lead stretched to four with ten minutes of normal time left when patient Cavan play ended with the excellent Lynch firing over.

But Leitrim were not giving up and even though David Bruen was yellow carded for a clash with O’Reilly, the fact that the Cavan man did not receive a second yellow incensed the Leitrim crowd. That energy transmitted itself to the Leitrim players and although Beirne dropped a free short, intense Leitrim pressure forced over-carrying and Beirne tapped over.

There was no a goal between the teams with five minutes of normal time and five minutes of added time yet to play. Galligan put a monster 60 yard free wide while Beirne dropped another free short.

Paddy Maguire also saw a shot fall into Galligan’s hands in a fractured final stretch of the game. Paddy Lynch and Ryan O’Rourke were both booked but Lynch made sure of the Cavan win with a superb effort from the corner to seal their first League points.