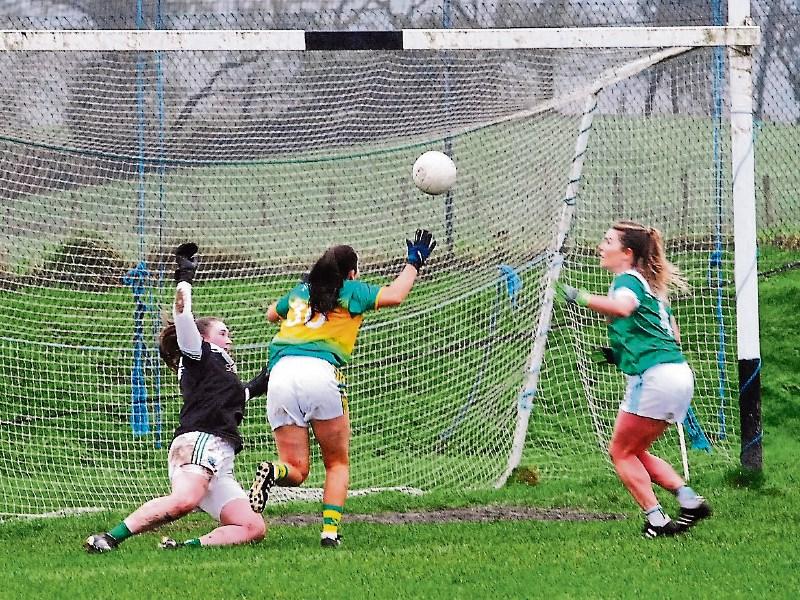 Roisin Fowley tries to divert the ball to the Fermanagh net after keeper Megan Maguire made a point blank save during last Sunday's Lidl LGFA Division 4 clash Picture: Willie Donnellan

Leitrim mean business - that’s the only message coming out of Sunday’s ruthless destruction of Fermanagh in the opening round of the 2022 Lidl LGFA NFL Division 4 North campaign as the Green & Gold tore apart their neighbours with awesome efficiency.

There was always the feeling that an understrength Fermanagh would struggle against a well motivated and evidently superbly conditioned Leitrim but few envisaged just how much of a gulf there would be between the teams as the Green & Gold were just operating on a different planet.

Manager Hugh Donnelly will want to keep his team’s feet firmly planted on the ground but it is hard to avoid the notion that if Leitrim keep producing this sort of intensity, both in defence and attack, they are going to be very hard stopped in this year’s League.

Michelle Guckian rightly took the plaudits as Fermanagh had nobody capable of stopping her while Ailish Cornyn delivered a master-class in marking, snuffing out the threat of Fermanagh’s danger woman Blaithin Bogue while all around the field, Leitrim players were just far too good for their opponents.

Leah Fox, Laura O’Dowd, Mary Alice Maguire and Roisin McHugh stood out but you could have picked anyone as a star but those four were exceptional as were subs Megan McGovern and Roisin Fowley. 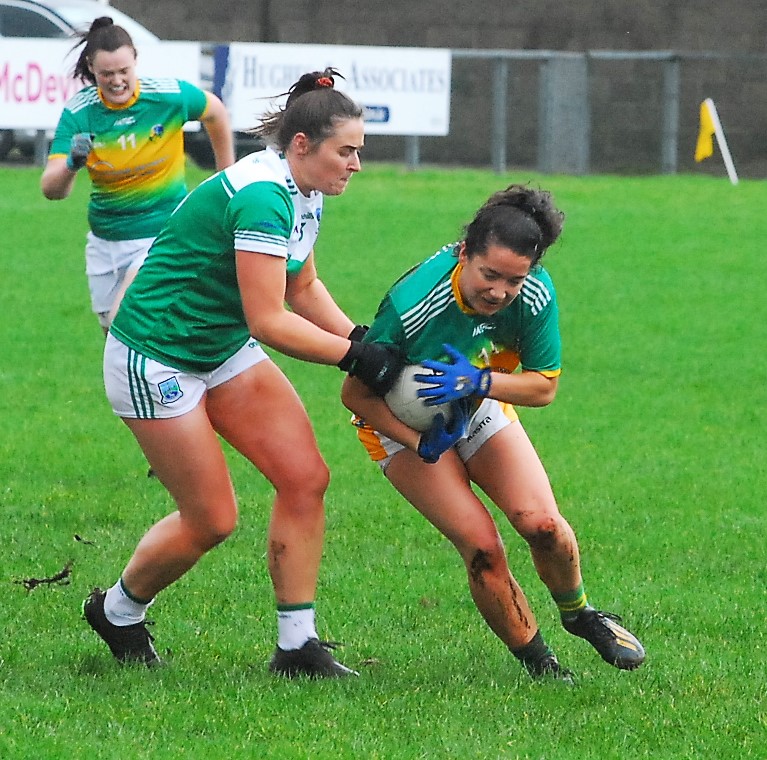 The headache for Donnelly is twofold - did Leitrim get enough of a challenge to truly test themselves last Sunday and just how does he pick a team now considering that, for a variety of reasons, Siobhan McCartin, Sinead Tighe, Carmel McGovern, Muireann Devaney, Vivienne Egan and Ailbhe Clancy did not start on Sunday.

Tighe did come on very late in the game but the Leitrim manager now has an embarrassment of riches to choose from with so many players putting their hands up for a starting place.

Leitrim started as they meant to continue with Sarah Reynolds blasting the ball to the net after less than 30 seconds after a Roisin McHugh shot came off the post and fell into her hands. Michelle Guckian pointed two frees either side of a goal chance that went abegging when McHugh’s pass was just too far in front of Laura O’Dowd.

Fermanagh opened their account with points from Eimear Smyth and Niamh McManus but any hopes they had were ruthlessly extinguished when Michelle Monaghan’s kickout was caught was Carla Le Guen who fed the ball to Roisin McHugh who then found Michelle Guckian in behind the cover and goal.

Guckian added two more frees before Blaithin Bogue pointed on 12 minutes but Leitrim responded with points from Sarah Reynolds, Laura O’Dowd and Ailish Cornyn as the game was already one way traffic.

Fermanagh’s Elaine Maguire fired over a point and Bogue saw a shot saved but any hope they had was extinguished when Bogue was harshly sin-binned for a foul on Charlene Tyrell after 22 minutes.

Guckian and Sarah Reynolds added points before halftime while sub Roisin Fowley blasted home after a slick passing move and a great delivery from Roisin McHugh to leave Leitrim 3-9 to 0-4 in front at the halftime break.

It could actually have been far great with the Fermanagh keeper making great saves from Fowley and Guckian but Leitrim didn’t have long to wait for their fourth goal when Leah Fox’s pass released Roisin McHugh who blasted to the net after just 15 seconds of the second half.

McHugh’s reward was to be replaced a minute later, by which time Leitrim had added points from O’Dowd & Fowley and the match died an understandable slow death after that with manager Hugh Donnelly running in his entire bench before the finish.

Michelle Guckian added two more points, Roisin Fowley and Siomha Quinn one each before Fermanagh got their first score of the second half from a Smyth free. Subs Shaylyn Ward & Emma McGovern both added points before Fermanagh had a late flourish with another Smyth point and a well worked Blaithin Bogue goal in added time.

Leitrim had the last word with another Ward point to complete a very comprehensive win. 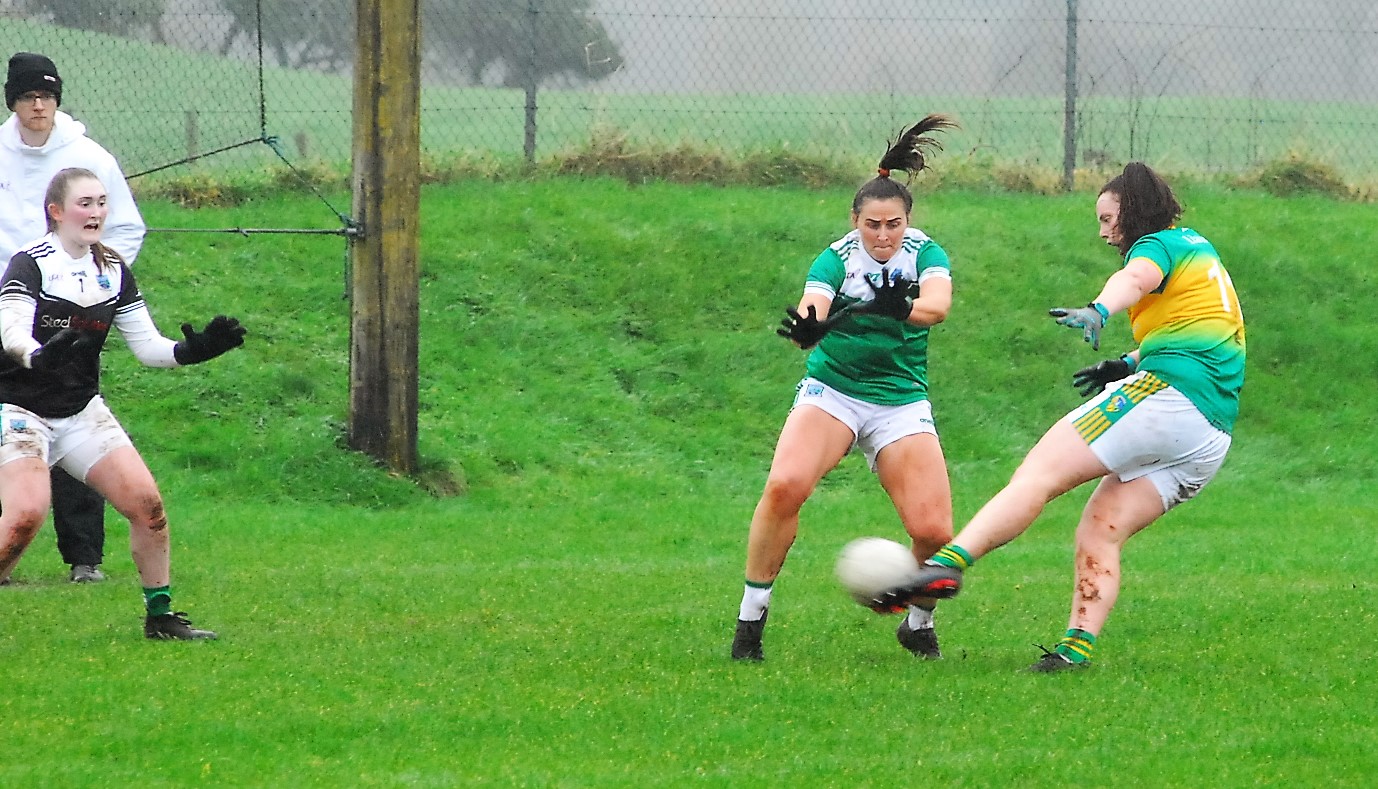