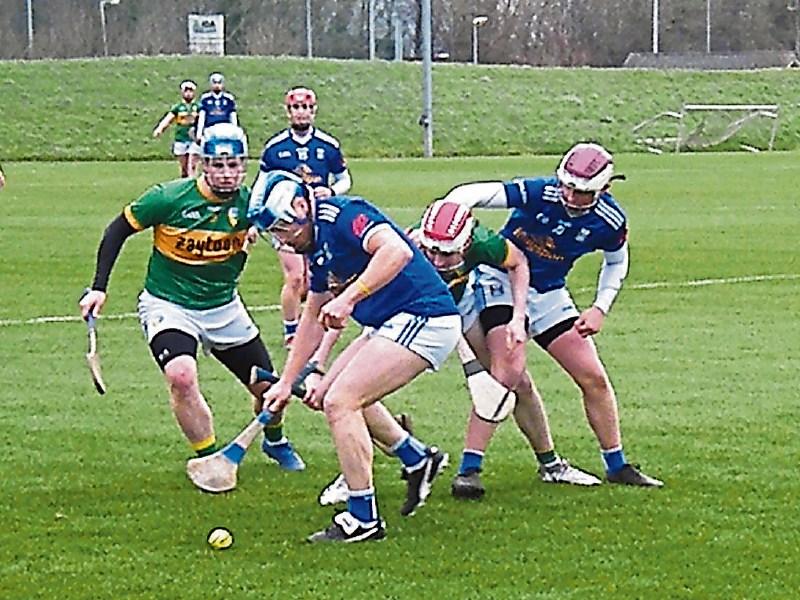 Changed times when Leitrim can comfortably beat a team who had defeated them in last year’s League and all manager Olcan Conway could see was the errors that he felt plagued Leitrim’s impressive seven point victory over Cavan last Saturday in the Allianz NHL Division 3B.

Leitrim endured a difficult 2021, including a three point reversal at Cavan's hands but 2022 has been much better with victory over Mayo in the Connacht Hurling Shield and now two victories in the Allianz League.

Played on a superb surface at the GAA’s facilities in the Sports Ireland Campus in Abbotstown, this game was dominated by the wind that blew straight down the field and when James McNabola scored the game’s only goal just five minutes into the game, it proved to be the game’s key score.

That goal meant Cavan were put on the back foot in the first half despite having the benefit of the strong wind and gave Leitrim a cushion against it. They used it well, going it at halftime level and inspired by a powerful second half display by my man of the match, Karl McDermott, Leitrim were well worth their win.

All over the field, Leitrim had big performers - Paul Lenehan, David McGovern and Stephen Goldrick were abrasive, close marking and commanding defenders while upfront, Joe Murray and James McNabola probed and tested the Breffni defence.

Even off the bench, Leitrim had an impact and considering they were without a number of key players and were light on the bench, the victory is a testament to Leitrim’s growing strength in this division.

They now face two crucial tests with Longford and Fermanagh in their final two games - victory in just one of the two games would be enough to book their place in the League semi-final but an unbeaten run would see them qualify straight for the division final, with the second and third placed teams playing a semi-final.

Cavan, with the considerable wind at their backs in the first half, needed a good start but after three wides from the Breffni blues, it was Leitrim who struck a killer early blow when a high ball into the area broke for Joe Murray. His effort was smothered but the sliothar fell to James McNabola who unleashed a rocket of a shot to the far corner from a tight angle.

That came after just five minutes and it proved to be the game’s defining score as although Cavan hit back with points from Fiachra Hughes and Diarmuid Carney, Leitrim were able to hold them at arm’s length with a Gavin O’Hagan free being followed by a good point from Martin Feeney.

Liam Moreton was booked on 18 minutes and despite James Smith converting the free, clever Leitrim play saw them find Martin Feeney with a short free and the Dromahair man fired over to restore the three point gap.

Hughes replied with a brilliant point from the corner on 24 minutes before adding another as he struggled to escape the close attention of Paul Lenehan who did a fine job in harrying and confining the one real score threat Cavan possessed.

Leitrim produced a wonderful, flowing move that should have been rewarded with a score only for James McNabola’s shot to drift wide as he fired into the teeth of the wind. Both teams were now missing chances but a Conor Bannon free in added time left the scores level at 1-3 to 0-6 at the halftime break.

Liam Moreton saw a shot blocked just before the break but Leitrim regained the lead about 15 seconds after the restart when the hugely impressive Karl McDermott strode forward from centre back, bursting through a tackle to fire over.

Now, if Leitrim thought they were going to run away with the game, they were sorely mistaken as Cavan dug in and Leitrim suffered an attack of the yips. Two Gavin O’Hagan frees, for fouls on Joe Murray and McDermott, stretched the lead to three but Leitrim started to find their range midway through the half.

O’Hagan converted a free before Leitrim’s Roscommon recruit Sean Markham got two in the space of a minute, both from distance and the second set up by good work by Conor Hackett.

Cian Mallon had a goal shot saved as Moreton, Murray & Delaney registered wides but whatever alarm there was at the missed chances was offset by the fact that Cavan couldn’t get out of their own half.

When they did, they found the wind almost gifted them a goal when James Smith’s free dropped short but was cleared off the line, Smith did fire over a free on 66 minutes but Leitrim replied with two superb points from Karl McDermott over the space of 60 seconds.

Subs Diarmuid Kelleher and Gavin O’Brien drove home the Leitrim advantage with two good points but O’Brien was unlucky not to find the net on a sweeping Leitrim attack. Cavan did fire over two late points from Smith but it was never enough to threaten a comfortable Green & Gold.