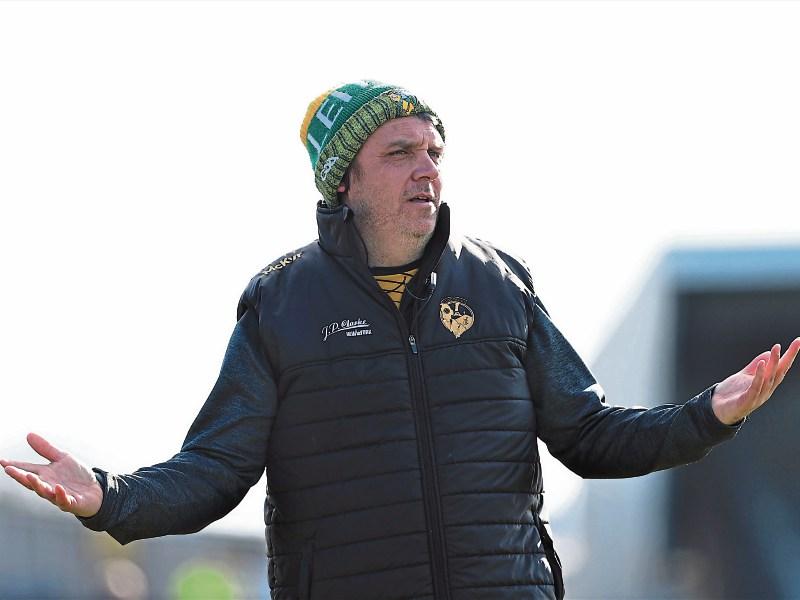 Leitrim manager Olcan Conway expresses his puzzlement with a decision on the field during last Sunday's Allianz NHL Division 3B defeat to Longford Picture: Willie Donnellan

They may have suffered their first defeat of the Allianz NHL Division 3B campaign against Longford last Sunday in Glennon Brothers Pearse Park but manager Olcan Conway believes that Leitrim hurlers are not out of the race for the League title just yet.

There was no hiding the disappointment felt by the Leitrim manager after the match but Conway immediately set his sights on the final group game against Fermanagh on Sunday March 20: “We’re disappointed with our performance but once again, we know we can improve and that is what our target has to be.”

Even with their defeat last Sunday, Leitrim are guaranteed a place in the semi-final against either Longford or Fermanagh depending on results in the final round of games but with the Erne men boasting a better scoring difference, Leitrim need to beat their neighbours by at least six points and hope that Longford don't run up a massive victory over Cavan the previous day.

The Leitrim manager had a good long chat with his players after the game in the Pearse Park dressing rooms and you feel that both he and they feel it was their own mistakes that contributed to their downfall against Longford: “Look, we’re very disappointed with ourselves, we didn’t use the ball well.

“I talked about this last week against Cavan, we didn’t take care of it well, probably overplayed it and didn’t secure first time possession. Longford were good and strong in the tackle, any time you took a step back at all, they were on top of you, fair play to them.”

Longford pushed on just after halftime and Olcan was at a loss to understand why Leitrim faded from the game: “It is hard to put the finger on it - we just didn’t push on in the second half, we made a lot of mistakes and we got pulled up on crucial things at crucial times.

“I don’t know how many times today we were pulled up on the handpass. We had that against Cavan but there were a couple of crucial times when that happened and that is disappointing but we will have to take it back, build on it and correct it and move forward.”

The loss of Karl McDermott with an injured ankle midway through the first half didn’t help Leitrim’s cause while the forward unit also missed James McNabola on the day.

“Karl is a big loss and James McNabola was out for today as well so they were two big players we were missing. Another couple of big players were also missing today. Karl is playing well back there, he will deliver a good long ball and pop up with a couple of scores from distance himself with that light breeze behind him in the second half so it was a loss.

“But his brother Aaron came in there and did fantastic, we shuffled the pack and still managed to stick with Longford. It was unfortunate to lose Karl in the first half but that is how it goes, it can happen any time in any of the games and you just have to deal with it.”

Looking forward, Olcan is definitely not giving up on topping the table: “We’re certainly not out of this League title race yet. One of the boys was telling me, I’m not 100% sure but I still think the automatic position is up for grabs because we would have the win against Fermanagh.

“Fermanagh would have the win against Longford and Longford the win against us. If we were to beat Fermanagh, we could still possibly go directly into the final and it would come down to scoring difference.

“We won two games and we lost one by a point - look it is not fully in our hands but we can go out and send a message and try and beat Fermanagh.”