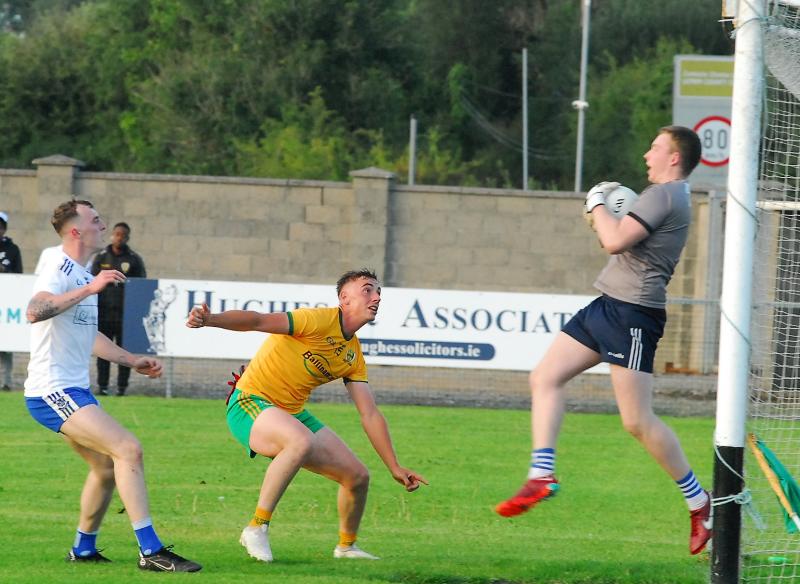 On a night of immense drama, the reigning Connacht Gold Leitrim SFC champions Ballinamore Sean O'Heslins and Masonite Division 1 champions Mohill both went down to shock defeats in round two of the competition that blows qualification for the knockout stages wide open.

Fenagh St Caillins finally got over their Mohill hoodoo when they had three points to spare over Mohill in Philly McGuinness Park, their 1-17 to 1-14 victory leaving them top of the Connacht Gold Senior Championship table ahead of Leitrim Gaels thanks to their superior scoring difference.

Fenagh led 1-8 to 1-6 at the halftime break and they withstood everything Mohill threw at them in the second half to run out three point winners, leaving them in a great positions to make the semi-finals.

St Mary's Kiltoghert got their championship campaign back on the rails when Jack Barnes scored a dramatic injury time winner in the fourth minute of added time to seal a 0-12 to 0-11 win over champions Ballinamore Sean O'Heslins in Pairc Sheain Ui Eslin. St Mary's led by two points at the halftime break, their lead established by injury time points from Cian Singleton and a Paul Keaney free.

In a dour match where both teams cancelled each other out while also shooting some bad wides, Ballinamore will feel aggrieved that they didn't win a first half penalty when a defender ran into Mark McGrory as he was about to shoot. McGrory was unfortunate in the second half when it seemed as if Ballinamore would surely goal, a long ball to an unmarked Paul Moran at the far post seemingly destined for the net.

However, the ball flew a little high, Moran palmed the ball down to McGrory but in a match saving tackle, St Mary's Conor Farrell prised the ball from the Ballinamore man's grasp. However, Ballinamore looked as if they would salvage at least a draw when Paul Moran (free) and Tom Prior both fired over points in added time.

But there was time for one final denouement as Daire Farrell's burst up the centre saw him find an unmarked Jack Barnes in between the lines and the sub swivelled sharply to fire over a precious match winner that gets the Carrick men back on track.

Leitrim Gaels picked up their second win of the campaign when they completed a north Leitrim double with a 3-9 to 0-8 win over St Patrick's Dromahair, just a week after they had beaten Glencar Manorhamilton. Last year's Intermediate winners put the Gaels under severe pressure but for the second week in a row, Paul Prior's team grabbed three goals to take the victory.

Glencar Manorhamilton got back to winning ways when they made the long journey to Gortletteragh a profitable one thanks to a 0-16 to 1-10 victory. With a better scoring difference, the north Leitrim men now in fifth place, just ahead of Gortletteragh who are in the final playoff spot.

Aughawillan also got back to winning ways as they handed Melvin Gaels their second defeat of the campaign, the Willies winning 2-8 to 0-6 at home. Aughawillan led 1-4 to 0-2 at the halftime interval and a second goal put the game beyond the reach of Melvin Gaels who have yet to pick up a point.

In the Smith Monumentals Intermediate championship, Aughnasheelin defied a crippling injury list to pick up an important 1-17 to 2-9 victory away to Aughavas on Saturday. The Division 2 finalists showed their strength to overcome the Division 3 finalists in their first championship outing.

Gaels fans bask in sunshine and comprehensive win over Drumkeerin

On Friday evening, Allen Gaels had a 2-15 to 0-10 victory over Drumkeerin that was much harder fought than the scoreline suggests while Bornacoola shocked Division 3 champions Kiltubrid in Dromod on Friday night, winning 2-9 to 1-10. A Mervyn Howard goal got the Bors off to a flying start but Kiltubrid came charging back but the home side led 1-5 to 0-4 at the break.

Kiltubrid got the perfect start to the second half when Danny McWeeney blasted to the Bornacoola net inside a minute and they opened up a three point gap at one stage in the second half. However, a goal from County star Damian Moran tied the scores and Bornacoola finished strongest with late points from Sean McKeon and Ollie Vaughan to seal victory.