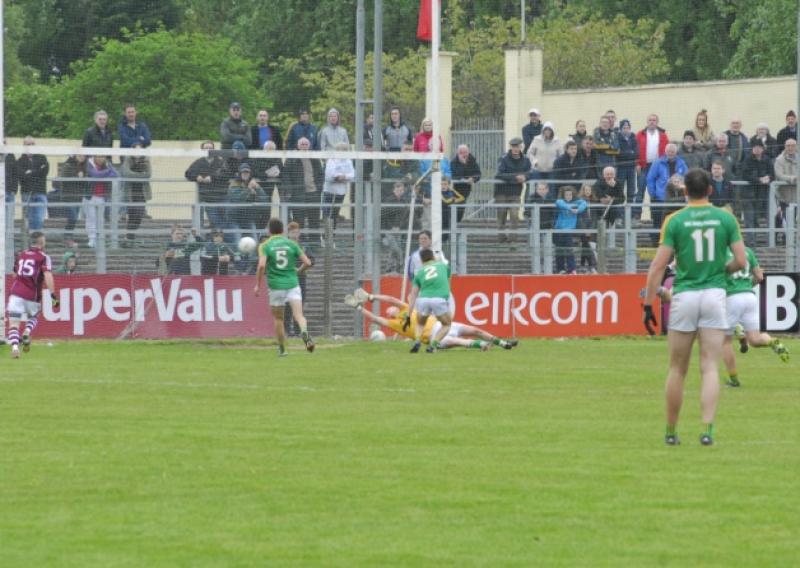 Galway cruised to an eight point win in the Connacht Senior Championship Quarter-Final in Pairc Sean Mac Diarmada but not without a searching test from Shane Ward’s fully committed Leitrim.

Galway cruised to an eight point win in the Connacht Senior Championship Quarter-Final in Pairc Sean Mac Diarmada but not without a searching test from Shane Ward’s fully committed Leitrim.

A dour and not very exciting championship encounter saw both sides intent on containing each other but Galway’s greater physicality and their ability to make the most of their chances proved the difference on a tense day.

Leitrim will rue four missed goal chances, two in the opening seven minutes, that would have given their early dominance a greater reflection on the scoreboard.

But there was no doubting that once Galway adjusted and started to dominate in the middle of the park, they ground their way to their expected championship victory but in a manner very different to the freewheeling Galway sides of the past.

Galway held their shape throughout, widened the field at every opportunity and patiently played a more contained game-plan than normal but it was their pressure on the ball coming out of the Leitrim defence that ultimately made the difference in the end as they forced turnovers and frees that Man of the Match Paul Conroy converted with unerring accuracy.

It was nevertheless a more promising display from Leitrim than in recent years with a definite game-plan and obviously fully committed players. Manager Shane Ward and his players are already turning their thoughts to the qualifiers as they seek to build a new future for this crop of Leitrim players.

Despite early Leitrim pressure, Galway opened the scoring with a Paul Conroy free after a foul on Damien Comer but Leitrim immediately responded with a great Sean McWeeney point after good work from Shane Moran.

Leitrim went in front when Ronan Kennedy pointed from all of 45 yards following a quick free in space and Leitrim almost had the perfect start a minute later when Donal Wrynn almost connected with a Kevin Conlan free, the ball striking the post and rebounding to Wrynn but keeper Brian O’Donoghue saved the fisted effort.

Michael Lundy showed a rare bit of attacking verve for a dour and dogged contest as he dodged around two Leitrim defenders to score a nice point to tie the scores before Leitrim had the chance of a second goal when Ronan Kennedy left his man in the dust in the bottom left corner.

Kennedy cut in along the endline but his fisted pass across the face of the goal drifted and narrowed the angle for Donal Wrynn who nevertheless managed to hammer the ball off the woodwork in another escape for Galway.

Unfortunately, Leitrim’s bright start was being undone by their own inaccuracy as Wrynn, Conlan (50) and Thomas Mulvey all missed chances before Paul Conroy converted a free. Cathal McCrann did well to grab hold of a high ball before Kevin Conlan sent a fifty straight over the bar with 14 minutes left in the half.

That had the scores tied but Galway took control of the contest over the next ten minutes with Conroy (2) and Peadar Og O Griofa both converting frees while Galway also had the ball in the net only to have the score disallowed for a square ball.

Conroy added his first from play, a great effort after a Leitrim turnover but the crucial score came on 32 minutes when Paul Conroy’s long ball was brilliantly fielded under immense pressure by Damien Comer. The Corofin man managed to hold off Ronan Gallagher as he turned and drilled the ball past a helpless Cathal McCrann.

Instead of destroying Leitrim, the Galway goal prompted Leitrim’s most productive spell as Fergal Clancy collected a long ball, played a one-two with Thomas Mulvey and scored a fine point.

Leitrim could have had a goal when Ronan Kennedy broke clear after his marker slipped but Galway keeper Brian O’Donoghue made a fantastic save at the near post to deny him a goal but there was a consolation as Kevin Conlan converted the resulting fifty.

And with the two added minutes already up, Leitrim wiped out the goal when Sean McWeeney’s effort from the right wing was waved over by the umpire but it has to be said that everyone in the press box behind the kick and more than a few Leitrim supporters judged the ball drifted wide.

That left Leitrim trailing 1-7 to 0-6 at the halftime break and Leitrim were intent on a quick breakthrough and they almost got it when Donal Wrynn broke clear but dragged his shot from the left wide of the right post after just 15 seconds.

Gary O’Donnell finished a patient Galway move with a point on two minutes, the sort of score that typified the second half as the Tribesmen patiently waited and took their chances.

Both sides missed chances before Conroy converted a fifty yard free on 13 minutes while Leitrim just managed to scramble the ball away after a high ball caused problems in the defence.

Damien Comer showed his class as he rode two obvious fouls to drive the ball over the bar but there wasn’t to be a score for another 12 minutes with both sides missing chances and introducing fresh legs.

Leitrim got their first score of the second half 27 minutes into the second period when Kevin Conlan converted a somewhat soft enough free free but Danny Cummins immediately replied with a score that was far too easy.

Cummins then fisted the ball over the bar after a high ball broke for the Galway attacker as there was a brief hint of a goal.

• For more analysis and reaction from Sunday’s Connacht Championship game, see this week’s Leitrim Observer, in shops next Wednesday.