Carrigallen turn League form on its head to draw with Champions 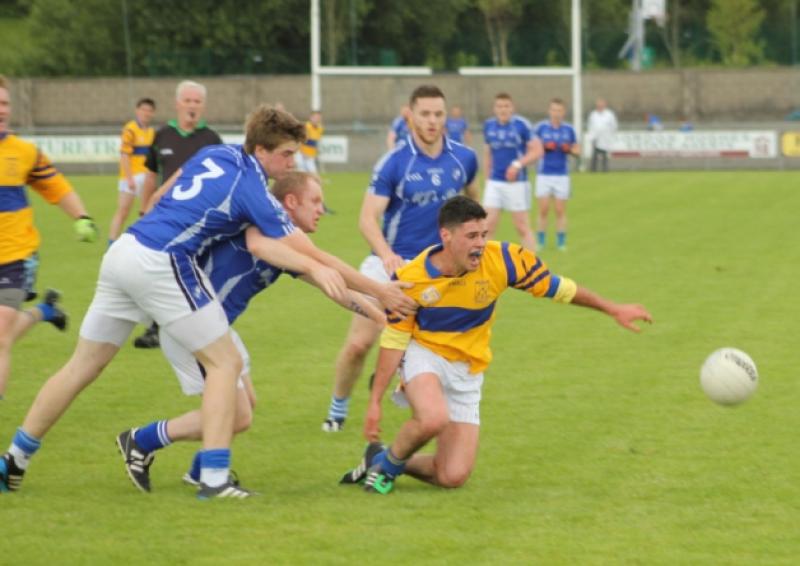 The league form book was ripped up on Sunday afternoon last in Ballinamore as defending Connacht Gold Senior Championship winners Aughawillan locked horns with Carrigallen who are currently sitting at the bottom of Division 1.

The league form book was ripped up on Sunday afternoon last in Ballinamore as defending Connacht Gold Senior Championship winners Aughawillan locked horns with Carrigallen who are currently sitting at the bottom of Division 1.

The game began with Aughawillan, who are just a point off top spot in the Gallogly Catering Division 1, looking as though they would be much too strong for their opponents but over the course of an absorbing encounter that proved to be far from the case.

A slightly fortuitous goal, in the latter stages of the first half brought the match to life and seemed to instil a sense of belief in the Carrigallen players and supporters that an upset was possible.

Prior to that score the Carrigallen players looked as though they didn’t think a victory over the defending champions was possible.

The game began with Aughawillan bossing matters from the start as they looked to bring their league form into the championship, against opponents who may not have been operating with the same confidence levels having lost their nine division league games played so far this year.

The difference in the teams during the opening stages was perfectly summed up by the game’s opening score.

Gary Deane, Ciaran Gilheany and Shane Flanagan combined inside the opening minute to carve through the Carrigallen defence before Flanagn was fouled. A point seemed inevitable from Ciaran Gilheany’s free but when it struck the upright, the only player ready for the rebound was the man who struck the free and Gilheany made no mistake the second time.

Two minutes later, the lead was doubled when Gilheany converted another free as Carrigallen struggled to make an impact on the game in an attacking sense.

Gilheany’s third successful free helped Auaghawillan increase their advantage and with the game still just 11 minutes old the defending champions pulled further clear as they struck for the first point from play against a side who appeared to be in real trouble.

With Morgan Quinn operating in a deep position, Aughawillan patiently passed the ball upfield and when Gary Plunkett took possession he pointed to increase the pressure on Carrigallen.

Having struggled to make an impact on the game during the opening exchanges Carrigallen opened their account in the 13th minute and it proved to be a score worth waiting for.

Gerald Percival showed the defence a clean pair of heels as he raced down the left wing before checking back onto his right foot and shooting for his side’s first point.

Although that score helped raised the levels of the Carrigallen performance at this stage of the game, it was still very much Aughawillan who were to the fore and they added to their advantage with pointed frees from Morgan Quinn and Ciaran Gilheany either side of a Derek Reilly pointed free for Carrigallen.

With five minutes of the half remaining, Carrigallen struck for a goal that reignited their interest in the game and immediately there was a transformation among the Carrigallen players and supporters in the stand who now sensed they didn’t have as much to fear as they may have previously thought.

Barry Reilly appeared to be fouled as he was about to shoot at goal but the decision was taken to allow play to continue and that proved to be a good decision from a Carrigallen point of view as Reilly’s shot deflected off an Aughawillan defender and found its way to the Aughawillan net.

The lift that gave everybody from Carrigallen was got from that score was immediately evident as all of a sudden, Carrigallen tackled with a greater hunger and attacked with renewed belief.

They drew level with three minutes of the half remaining when Ciaran Flynn and Ciaran Reilly combined to release Eamonn O’Malley and the man who was introduced as an early substitute made no mistake with a composed finish.

It was to get even better from a Carrigallen point of view deep in injury time when they took the lead for the first time courtesy of an excellent point from Ciaran Reilly.

The only downside for Carrigallen was that when they were playing their best football, they were halted in their tracks as the half time whistle sounded but they would have taken comfort from a glance at the scoreboard which issued a reminder that Carrigallen led 1-4 to 0-6 at the interval.

Aughawillan flew out of the traps at the start of the second half with Mark Plunkett’s point from distance, 23 seconds after the restart, quickly followed by a Morgan Quinn pointed free to regain the lead for the defending champions.

To their credit, Carrigallen were now well and truly up for the fight and they replied with an excellent point from one of their star performers in Ciaran Flynn.

Although full of drama and excitement and some fine individual performances from the likes of Michael Quinn, Sean Flanagan, Gary Reynolds and the elusive Andrew McManus, the second half proved to be a low scoring affair with just a point each registered in the final 25 minutes of action.

Both sides will point to missed chances during the second half but neither could claim to have done enough to have fully deserved victory.