The wait is over for Dromahair 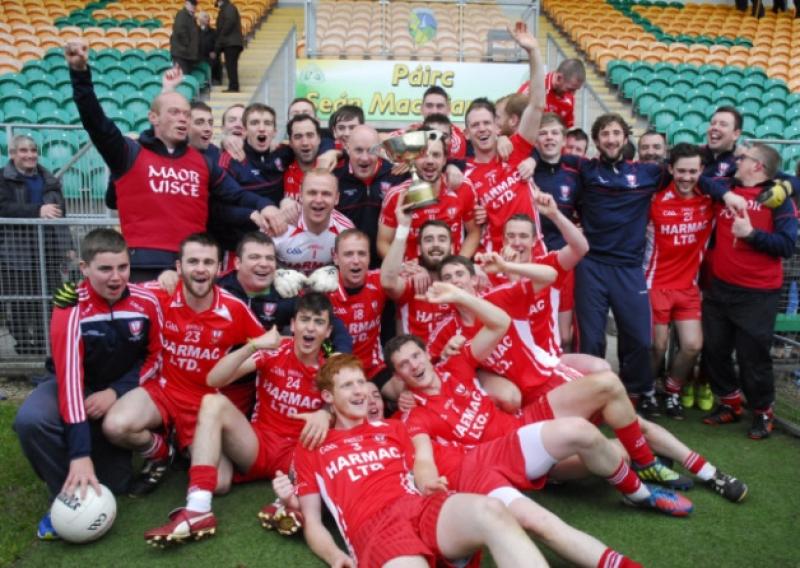 After years of near misses and hardluck stories, Dromahair’s wait to join the top table in Leitrim club football ended on Sunday last.

After years of near misses and hardluck stories, Dromahair’s wait to join the top table in Leitrim club football ended on Sunday last.

For Ballinamore, Sunday’s final was an opportunity to banish the memories of relegation two years ago while for Dromahair the final offered a chance to finally get over the line after years of near misses.

The victory was built on a defence that was almost unbreachable. Time after time, especially when they had established a lead in the contest, they invited Ballinamore on to them and more often than not the Ballinamore players were confronted with a wall of red that showed incredible discipline in the tackle.

With the defenders doing their job in terms of protecting Kieran Meehan’s goal, the midfeild duo of Paddy McGowan and John Evans laid the platform for victory with their honest endeavour, hard running and ability to find a team mate when in possession.

From a Ballinamore point of view, there will be another day for this young team. After the game the consensus from a gracious in defeat team was that the better team had emerged victorious. While that may have hurt them, they were able to point to the fact they had a number of players on the team that won the 15 a side minor championship a week earlier and they will certainly learn from Sunday’s defeat.

In fact the opening 10 minutes suggested Dromahair could be in for a difficult afternoon as Ballinamore were the quicker to settle and come to terms with the strong, swirling breeze.

The first to adapt to the conditions was the man of the match in last week’s minor final, Dean McGovern. He made light work of the difficult angle to open the scoring in the ninth minute.

Unfortunately for Burns, and for Ballinamore, that proved to be his last involvement in the game as a heavy fall after he shot led to an injury that forced his retiremenet from the game.

The break that occurred during that injury allowed Dromahair an opportunity to regroup and the momentum that Ballinamore had built up was suddenly gone.

Dromahair opened their account in the 16th minute with a goal deserving to grace a final.

Dromahair seemed to draw confidence from that goal and they increased their lead with points from a Kevin Conlan free and a fine Cian Clinton strike.

With the advantage of the wind Ballinamore hit back with a wonderful Wayne McKeon free from over 45 metres and they reduced the deficit further when Peter Reynolds converted a free.

With three minutes of the half remaining Dromahair’s Michael Clancy and Robbie Cunningham combined to find Gerard Kelly who judged the wind to perfection and with the outside of his boot slotted the ball over the bar.

Ballinamore hit back with a Luke Murphy point but it was Dromahair who were to complete the first half scoring with a Kevin Conlan point to give the North Leitrim men a 1-4 to 0-5 lead at the break.

After Robbie Cunningham released Kevin Conlan, the Leitrim forward attempted to go around Ballinamore goalkeeper Philip Farrelly. Although Farrelly got a touch to the ball, Conlan was able to keep the ball in play and fed the ball across goal where Gerard Kelly was waiting to slot the ball home.

That score set the tone for the second half as Dromahair invited Ballinamore on to them and then disaplyed a wonderful exhibition of controlled and disciplined tackling.

With Ballinamore struggling to make a breakthrough, Dromahair extended their lead with a Kevin Conlan point before Ballinamore replied with a Luke Murphy pointed free.

That proved to be Ballinamore’s final score of the game as the conditions and the Dromahair defence were too much to break down.

Substitute Gary Fowley registered another Dromahair point with his first involvement and victory was all but secured when Dromahair struck for their third goal.

Man of the match Paddy McGowan won the ball in midfield and after continuing his run received the ball back from Kevin Conlan before dispacthing the ball to the goal.

There was to be just one final score and it sparked scenes of joy and celebration on the sideline and in the stands amongst those in red and white.

Rory Kelly did briliantly to find Gary Fowley who struck an unstoppable shot past Farrelly to secure victory and bring Dromahair’s long wait to an end.