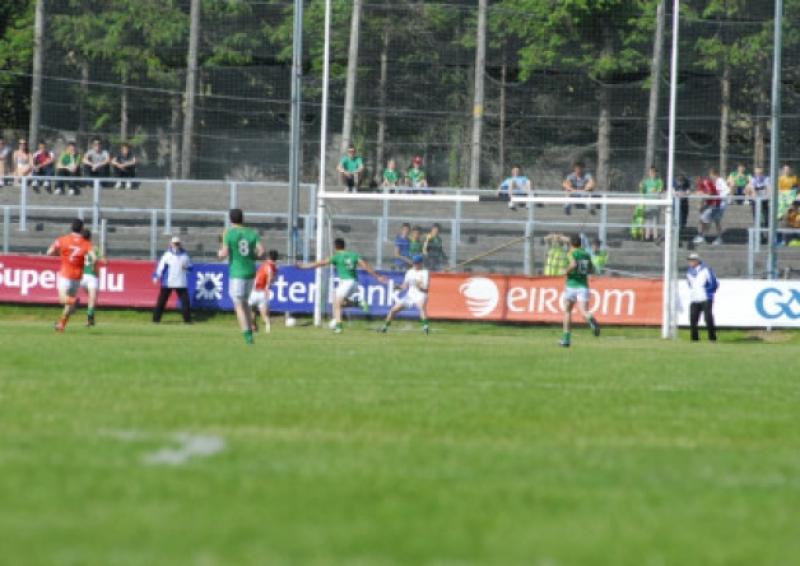 Leitrim suffered one of their heaviest ever Championship defeats as Armagh went goal crazy in Pairc Sean Mac Diarmada on Saturday evening.

Leitrim suffered one of their heaviest ever Championship defeats as Armagh went goal crazy in Pairc Sean Mac Diarmada on Saturday evening.

Unfortunately, the scoreline is not a misprint as Armagh had an incredible 27 points to spare at the final whistle, never letting up as they crushed Leitrim and found the net a mind-boggling eight times.

The All-Ireland Qualifier was always going to be a tough task for a team devoid of seven injured first choice players but few Leitrim players would have imagined the scale of the horror that unfolded before a sweltering Pairc Sean Mac Diarmada.

With a huge Armagh support making the game seem almost like a home contest for the Orchard County, Leitrim were on the back foot from as early as the fifth minute when Paddy McGowan was forced from the contest with injury.

It was to get far worse - Eugene McVerry hammered home the first of three goals after just nine minutes as as the visitors repeatedly ripped open the Leitrim defence and it soon became apparent that it was a matter of trying to get to the final whistle as soon as possible.

That final whistle did not come before Leitrim suffered an horrendous humilation - eight goals conceded is the sort of Playstation scoreline that you wouldn’t have thought possible but a merciless Armagh never let up, Jamie Clarke quite cruelly pouncing for two goals in as many minutes with less than 10 minutes left on the clock.

With reports from the camp suggesting that as few as 16 Leitrim players were fit to train during the week, and after the disappointment of losing to London, it was no wonder that Leitrim’s spirit cracked and cracked badly.

Some Leitrim players unfortunately looked like rabbits caught in the headlights and there was to be no escape as Armagh refused to let up right until the final whistle.

Leitrim tried to play an extra-man in Paul Brennan in front of Jamie Clarke but Armagh’s tactic of pulling their two man full-forward line out and allowing runners sprint from deep, often unmarked and unopposed, negated Leitrim’s tactics.

Perhaps Leitrim should have dropped 12 or 13 men behind the ball in a massed defence but such was Armagh’s drive and ferocity, it was hard to see how this ravaged Leitrim side would have coped with Armagh’s intent and fitness.

Armagh talked a lot of a loss in a challenge game to the Green & Gold some weeks ago and that loss seems to have driven their ruthlessness on Saturday but that Leitrim victory saw Paddy Maguire & Alan Wynne in the full-back line with Maguire keeping Clarke very quiet.

Midfield, with Darren Sweeney obviously still hampered by injury and without Paddy McGowan’s physical presence, was cleaned out last Saturday and that gave Armagh the platform they needed for victory.

Robbie Lowe got two goals in that challenge game against Armagh and the Orchard men never let the St. Mary’s out of their sight, putting two men on him and never allowing him a clear run at goal. Lowe was still one of the few threats Leitrim possessed but he never got the freedom he needed to do any real damage.

The scale of the defeat is just devastating to a group of players and management who have been operating under siege like conditions ever since the dropping of the four players for disciplinary reasons but the truth is that it was injuries that sunk Leitrim’s championship campaign - some counties talk about being without one or two players but Leitrim started without Alan Wynne, Paddy Maguire, Gerry Hickey and captain Emlyn Mulligan while Cian Reynolds, Enda Williams and Brian McDonald were also ruled out.

Darren Sweeney, Ray Cox, Adrian Croal and Brendan Brennan have all been seriously hampered by injury in recent weeks and that is all without the four players dropped six weeks ago and you defy any team to do without so many key players and still be able to produce a result.

Leitrim’s luck of recent weeks continued to be as bad as ever as Paddy McGowan injured his knee in a challenge and is foced from the action after just five minutes, seconds after a 50 yard Tony Kernan free flies over the bar, with Ronan Gallagher coming on. Jamie Clarke then left Danny Beck for dead when he surged through and chipped over.

Nine minutes in, the first goal came when Barry Prior was put in touble by a poor hand-pass, the wing-back penalised for over-carrying as he was quickly surrounded. Quick as a flash, the free found Kevin Dyas in space down the right wing and he fed an unmarked Eugne McVerry who blasted the ball to the net on nine minutes.

Jamie Clarke was almost through for a second goal minutes later but was dispossessed as Leitrim created a few chances only to see Kevin Conlan and Sean McWeeney hit poor wides before Conlan converted a free after a foul on Adrian Croal after he was set up by Ronan Gallagher.

But then the floodgates opened as Tony Kernan hit 1-1 in the space of two minutes, the goal coming after Clarke won the ball, lost it and then regained to send an unmarked Kernan through to slot home an easy goal. Conlan and Clarke swapped points before Sean McWeeney lost possession in the middle of the park and Kevin Dyas soloed through untroubled to stick the ball in the back of the net.

Conlan and Aaron Kernan swapped frees but despite another Conlan frees before the break, Armagh went on to add 1-4 in the last five minutes of action, the goal coming after Aaron Kernan and Dyas cut open the Leitrim defence to leave McVerry with another close range finish.

That left the halftime score at 4-8 to 0-4 and it didn’t get any better in the second half as, after Aaron Kernan and Conlan swapped points, Armagh struck for two goals in the space of a minute, Caolan Raftery setting up McVerry for his hat-trick and moments later, Mark Shields waltzed through to finish lwo to the net.

Cathal McCrann denied Aaron Kernan a goal but Tony Kernan converted the resulting fifty, with Aaron Kernan following with a free before Kevin Conlan hit two points, including Leitrim’s first from play 14 minutes into the second half after a high ball was knocked down to him.

McCrann made another good save to deny Armagh sub Stefan Campbell after Clarke opted to try for a goal rather than take his point. Midfielder Stephen Harold added a point before Clarke won the ball out on the wing, soloed 40 yards and placed a low shot to the bottom right hand corner of the net with nine minutes to go.

Clarke would add a second goal before being substituted to rapturous applause, catching a high ball and planting the ball past Cathal McCrann.

Darren Sweeney became Leitrim’s second scorer on 64 minutes when he fielded a high ball and worked hard to point under pressure with sub Ray Cox converting a free.

Aaron Kernan had the last score of the game, a free just into added time as the referee mercifully blew early to end Leitrim’s agony.