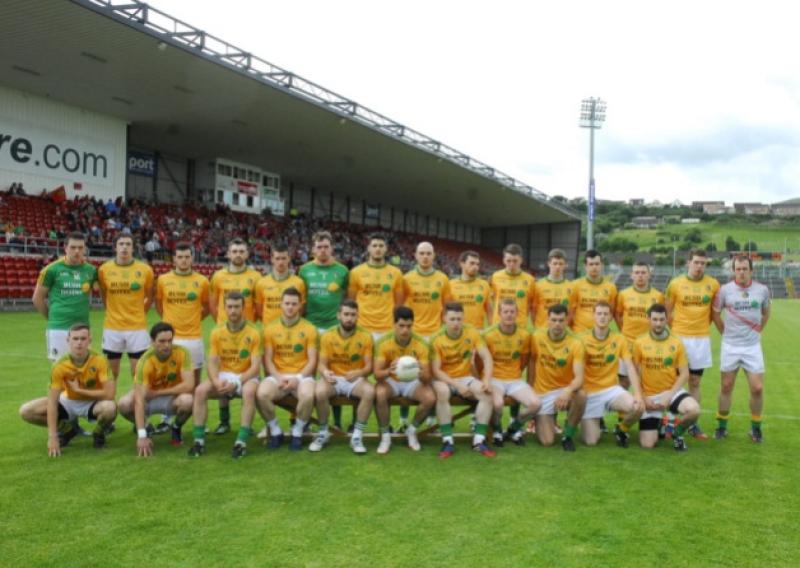 It was not quite the 27 point beating suffered last year in the All-Ireland Championship Qualifiers but it was close as Leitrim suffered a mammoth 21 point defeat at the hands of a rampant Down last Sunday in Pairc Esler Newry.

It was not quite the 27 point beating suffered last year in the All-Ireland Championship Qualifiers but it was close as Leitrim suffered a mammoth 21 point defeat at the hands of a rampant Down last Sunday in Pairc Esler Newry.

From the word go, Down were just in a different class to Leitrim as their pace, movement and strength in possession overwhelmed a Leitrim team beset by player absences, lack of confidence and clearly not at ease with itself.

The gulf in class between a Division One team and a Division Four team was always going to be hard to overcome but for the second year in a row, the Green & Gold were tormented in their last outing of the year, adding to the trauma of Saturday’s Connacht Minor Championship defeat to Roscommon in Hyde Park.

Starting the game without one from Cathal McCrann, Paddy Maguire, Wayne McKeon, Paul Brennan, James Glancy or Conor Beirne would normally be lamented as a huge loss but to start without all of them was a body blow that no team could overcome, let alone Leitrim.

The abscence of McCrann, Maguire, Glancy was expected added to by the suspension of Paul Brennan but the absence of McKeon due to illness and Conor Beirne after he injured in his leg in an accident just piled more misery on an already down-beat and down-cast Leitrim.

Manager Sean Hagan admitted he would take some time to consider his future but he did say that Leitrim face a rebuilding phase after a year that started so promisingly once more ended with a heavy and humilating defeat.

With so many absentees, Leitrim saw a lot of debuts, both in the senior jersey and for the championship with Alan McLoughlin joined by subs Nicholas Moore and Cian Clinton, all from this year’s U21 side, in making their Leitrim debuts while Philip Farrelly made his first ever championship start.

Yet another heavy Championship defeat, after a convincing Roscommon win in the championship, leaves us asking more and more questions about where Leitrim football is heading.

The exodus of players, some established leaders in the squad, leaves a lot of questions to be answered and it appears that, behind the scenes, the morale of the squad has not been good since the League ended, something evident in the body language of the players in Newry.

It would be easy to castigate management, easier still to slam players after what can only be described as a humilating day for the county but you’d have to wonder if the squad had ever truly recovered from the trauma of 2013?

With a loyal yet paltry Green & Gold support in Newry, it was obvious Leitrim were intent on a damage limitation exercise as Sean Hagan’s side immediately dropped 13 men behind the ball in an attempt to stifle Down’s attacking threat.

And incredibly, Leitrim took the lead with an Emlyn Mulligan free after a foul on Damien Moran in the very first minute.

But James McCartan’s team obviously remembered their first half struggles three years ago against Leitrim and they were determined not to allow Leitrim any foothold in this game, their pace and clever running angles through the massed Leitrim defence negated all of Leitrim’s plans.

Two quick fire responses from Conor Laverty and Dan Gordon had Down in front within three minutes, two more points from Donal O’Hara and Laverty with a pointed free from Mulligan set the tone for this encounter.

But the game was as good as over on nine minutes when Down found the net for the first time - Mark Poland cut in along the endline, his punched effort hitting the post and falling in front of the Leitrim goal. Laverty reacted much quicker and despite the presence of keeper Philip Farrelly and two defenders, the Down player forced the ball across the line.

Mark Poland ran unopposed down the left wing to point as Leitrim missed chances from Robbie Lowe, Barry Prior and Alan McLoughlin and a clearly focussed Down punished Leitrim with a second goal, set up by an unfortunate slip from Kevin Conlan.

The Leitrim man seemed to have no problem in catching a wild high shot that would have gone wide but the Dromahair player spilled the high ball behind him, Conor Laverty reacting with bewildering speed to gather and off-load to Niall Madine who showed neat footwork to slip the ball past Farrelly and into the net from close range.

Conor Maginn and O’Hare added points before Sean McWeeney gave the suffering Leitrim supporters something to cheer with a fantastic 50 yard point on 30 minutes. Down replied with a good Benny Coulter point before the home side had a let-off,

Cunningham would then show his prowess at the other end of the field as he drilled a fifty over the bar before the break to give Down a commanding 2-10 to 0-4 halftime lead.

Leitrim brought on Fergal Clancy for debutant Alan McLoughlin at halftime but Down added points from O’Hare and Laverty before Robbie Lowe set up Mulligan for a fine point.

But Down were in no mood to let up and with Coulter and Mark Poland combining with a series of passes, they cut through the Leitrim defence with ease and although Poland’s final pass seemed to elude Coulter, Laverty dived in to fist the ball to the Leitrim net seven minutes into the second half.

Coulter and Laverty would add a point each either side of Fergal Clancy seeing a high ball towards Robbie Lowe intercepted before Gary Reynolds came up from defence to fire a long range shot over the crossbar, despite the umpire first waving it wide before awarding it.

Mulligan swapped points wiht Kevin McKernan and Down completed their rout with a fourth goal, McKernan’s pass finding sub Damien Turley who turned sharply to blast the ball past a helpless Philip Farrelly from no more than 10 yards.

Down racked up three further points in the final quarter through sub Liam Doyle (2) and Mark Poland with Leitrim sub Nicholas Moore marking his first Senior team start with a late point that could have been a goal with a little more composure.