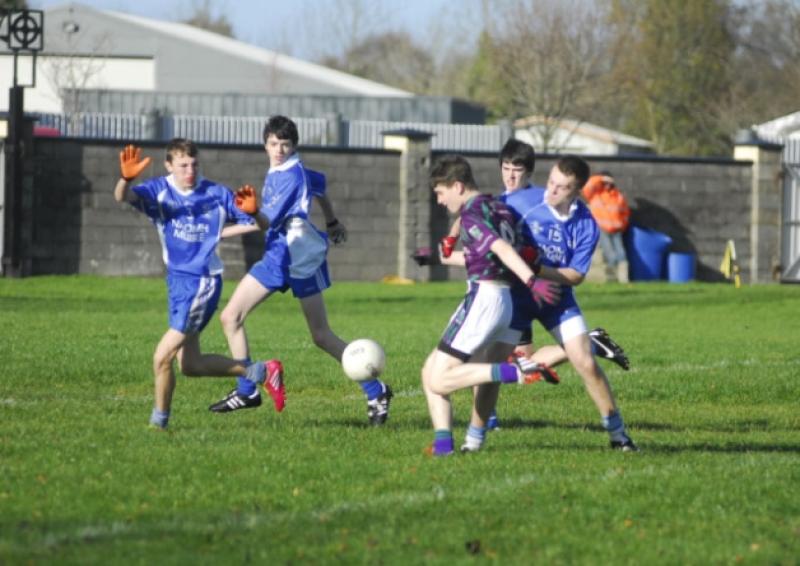 A powerful and dominant Leitrim Gaels won the battle of the parish as they saw off a young St. Mary’s Kiltoghert side last Saturday in Dromod.

A powerful and dominant Leitrim Gaels won the battle of the parish as they saw off a young St. Mary’s Kiltoghert side last Saturday in Dromod.

There may have only been two points between the sides in the round robin game but Saturday’s U16 Championship 13-a-side Final saw Leitrim Gaels confirm their favouritism with a display built on their superior fitness and physical power.

The Gaels had a host of quality players from Stephen McDermott and Mark Brehony in defence, Brian McElgunn and Andrew Guckian in midfield and Shaun Chandler, Narada Patrasco and Stephen Goldrick in attack proving too much of a handful for St. Mary’s.

Chandler in particular stood out with his skills on the ball but it was the impressive work-rate, fitness and desire of the Gaels that impressed as they were full of running from first ball to last.

A young St. Mary’s, with six U14s starting, battled hard throughout the contest but lacked the physical power of their rivals and couldn’t match their superb physical condition on a heavy pitch.

Mark Diffley, Jack Barnes, Thomas Earley, Eoin McLoughlin and Diarmuid Kelleher all had their moments but the Gaels were simpply a class above, leaving you feeling that they could easily have made an impact at a competive 15-a-side grade.

Stephen Goldrick finished off a good move for Leitrim Gaels to open the scoring with Mark Diffley responding from a free. Both sides missed chances but the Gaels appeared on top with points from Chandler, McElgunn and Goldrick (2) in a three minute spell, including a missed goal chance from Akim Kumevz and Narada Patrasco with keeper Zwar Ahmadi making a good save.

Diffley responded with a free but points from Patrasco and Chandler followed. St. Mary’s, however, finished the half well with Mark Diffley and Eoin Lyons on target to leave the halftime score at 0-7 to 0-4.

The Gaels continued to dominate in the second half and despite a succession of wides, they extended their lead with points from Chandler, McElgunn and Goldrick before Diffley halted the surge with a point.

However, Leitrim Gaels all but sealed victory when Kumevz was pulled down for a penalty and Brian McElgunn dispatched the ball to the net on 12 minutes.

Jack Matthews pulled back a point before Mark Diffley hit the crossbar but points from Patrasco and McElgunn kept Leitrim Gaels in command. However, their position was briefly threatened when Diarmuid Kelleher’s long range effort ended up in the net after a scramble.

Leitrim Gaels’ response was impressive - Chandler put over a free before sub Shane Finn fisted home a goal after Andrew Guckian’s strong run. The game ended with Chandler and Harden adding points to seal the win.