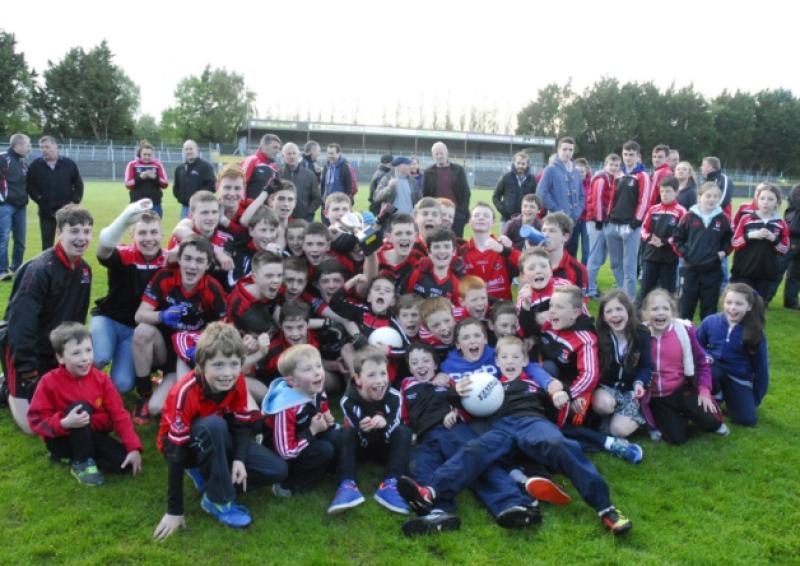 After a game where St. Brigid’s threatened to cause a huge shock, the superior fitness of well drilled Fenagh proved vital in the end as they took over the game in the second half with St. Brigid’s reduced to hitting on the break.

St. Brigid’s built up an eight point lead after 20 minutes and with Ben McGirl, Peter Prior, Evan O’Connor and Cormac Sammon impressing, they looked on the way to victory in Pairc Sean.

But a couple of positional switches from Fenagh with Tom Gilheaney moving to full-back and Nathan O’Rourke futher up the field transformed Fenagh as Jack Gilheaney and Riordan O’Rourke cut loose.

O’Rourke scored 3-6 on the day, a match wining score at any time but it was the influence of Gilheaney, who dominated in the middle of the field and drove his team on and scored a succession of long range wonder scores that broke St. Brigid’s.

Brigid’s added a second goal when Ciaran Cullen showed great finishing instincts to put his side seven clear, a lead increased despite a Mark Keegan point when Aaron Hoare and Ben McGirl pointed.

The last ten minutes of the first half belonged to Fenagh as they scored 1-4 to pull the lead back to a point at the break with points from Nathan O’Rourke, Oisin McLoughlin and Riordan O’Rourke (2), O’Rourke adding a great goal from close range.

That left St. Brigid’s 2-5 to 1-7 to the good but they would be without Evan O’Connor who was black carded. Still Brigid’s started well and increased their lead with points from McGirl and McGovern, Gilheaney scoring a 40 yard effort in reply.

But the game changed on 41 minutes when O’Rourke buried the ball in the net. Back came Brigid’s when Conor McGovern slid the ball beneath the keeper for a goal.

Fenagh replied with points from O’Rourke and Gilheaney but with ten minutes to go, Brigid’s hit a fourth goal when Peter Prior’s shot cannoned off the crossbar but sub Michael O’Hare finished the rebound to the net.

But any hope in Brigid’s hearts was wiped out a minute later when O’Rourke grabbed his third goal to tie the scores again before Gilheaney took over, scoring two towering points to put Fenagh in front for the first time.

With Brigid’s tiring, O’Rourke (2) and Gilheaney added points, Gilheaney scoring a wonder free from the corner to seal a five point win.