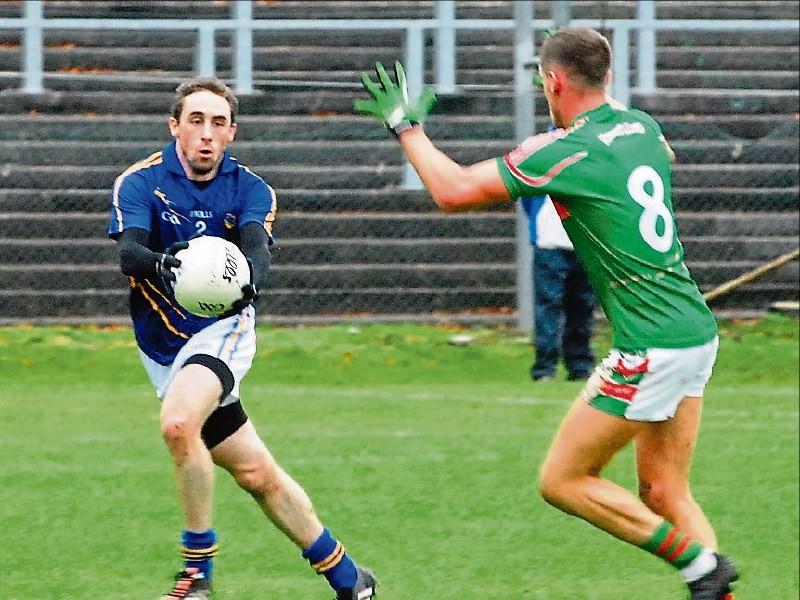 Aughawillan, the only Leitrim team in the last ten years to record a win in the Connacht Senior Club Championship, suffered a record defeat two years ago at the hands of Corofin and while Sunday's defeat wasn't near that scale, it will still hurt them deeply.

St. Brigid’s were without three key players while player manager Frankie Dolan was ruled out of the game due to an appendix operation but it appeared to matter little to the Kiltoom outfit who simply had too much power, class and guile all around the field.

The difference was all too apparent in the amount of times Aughawillan turned over the ball cheaply or lost the ball in challenges as St. Brigid's seemed to have more time as they played at a different pace to what the Leitrim champions could manage.

The jump in intensity from the club game in Leitrim and the best Connacht has to offer was stark and Aughawillan are not the first to suffer as, apart from Aughawillan's own victory over Tubbercurry two years ago, lots of Leitrim teams have suffered heavy defeats.

Mohill last year, St. Mary's in 2013, Melvin Gaels the year before and a couple of big defeats, amidst one or two defiant displays, from Glencar/Manorhamilton tell the story of a club game that is getting cut seriously adrift of the best teams in the Province.

Aughawillan start their games with a blast but this time they were on the receiving end as St. Brigid’s, obviously forewarned, struck for 1-3 in the first six minutes and Aughawillan never recovered.

The Willies had chances to settle themselves but a couple of missed opportunities clearly hampered them and St. Brigid’s, calm and authoritative, turned the ball over time and time again and plundered scores with alarming ease.

The real damage was done in the five minutes before halftime - a struggling Aughawillan had clung onto hope as they trailed 1-7 to 0-4 but incredibly, they were to concede six unanswered points, five from play, and with that the match.

The second half, as much as Aughawillan battled and fought, was a distinct anti-climax as a wasteful St. Brigid’s kicked a succession of horrible wides but still managed to outscore the Leitrim men 1-5 to 1-3 despite clearly going through the motions.

Barry Prior, Aughawillan's most experienced player, was one of the few able to reach the pace during the first half as the compression of time and space for Aughawillan's forwards saw them make no headway at all against St. Brigid's.

Prior, keeper Colin Maguire, Sean Flanagan, sub Stephen Gilheany and Mark Plunkett had spells where they imposed themselves on the game but they came up against a St. Brigid's team that is very much on a mission and obviously in a very different place when it comes to resources and players.

Ian Kilbride and Garvan Dolan were missing for the Roscommon men but it seemed to make little difference. And it wasn't age or experience as Brigid's featured three 19 years olds last Sunday but they are playing at a much higher level and it showed last Sunday.

You could sense the deep disappointment in Aughawillan but there is still the League for them to finish off the year on a high.

St. Brigid’s got off to a flying start as Senan Kilbride fired over twice in the first two minutes while Eoin Sheehy joined the attack to point on three minutes. Aughawillan had a couple of chances - Mark Plunkett had a shot blocked, Morgan Quinn put a free badly wide and Sean Quinn had a very bad wide.

They were made paid a heavy price on six minutes as Niall Grehan surged unopposed upfield and found an unmarked Darragh Dolan who drilled the ball to the back to the net.

St. Brigid’s responded with three unanswered points from Kilbride, a magnificent effort despite two defenders right on him, and one each from Mark Daly and Darragh Dolan. The game then went through a fallow period as Brigid’s registered five wides to two for Aughawillan before Barry Prior demonstrated the pace and aggression needed to break a tackle and fire over.

Brigid's corner-back Darragh Sheehy responded with a fine point before Mark Plunkett converted a 50 with about ten yards to spare and five minutes to halftime.

That proved a high point as St. Brigid’s went into overdrive with points from Niall McInerney, Karol Mannion, Adrian Gleeson, Eoin Sheehy (2) & Dolan, the free from Mannion their only score from a free.

It left Aughawillan with a 1-13 to 0-4 deficit and Brigid’s ensured there was no glimpse of a comeback as they fired over three points in the first five minutes, Gleeson, Brian Stack and Kilbride all on target.

Mark Plunkett converted a second 45 but missed a second one shortly after and they needed Colin Maguire to make a wonderful save from Ronan Stack after St. Brigid’s had cut through the Aughawillan rearguard with alarming ease.

Niall Beirne scored a nice point, his last act before being replaced, and Aughawillan had their best moment of the game when sub Stephen Gilheany played a one-two with his brother Ciaran before chipping a lovely shot over the keeper and into the net.

Aughawillan were definitely revved up but were soon on the backfoot - Rory McTague was yellow carded for a late hit and Colin Maguire saved a good shot from Brian Stack before Karol Mannion pointed after a short fifty.

The intensity was long gone from the game but St. Brigid’s still went looking for a second goal and got it when Man of the Match Niall McInerney surged into attack to create an overlap before feeding Mannion who launched a ferocious shot that crashed off the post but rebounded straight to Brian Stack for an easy tap in.

Padraig Kelly added a point before Sean Flanagan completed the scoring with a last minute point.

Main Man: Aughawillan battled and battled but hard to escape the conclusion that many of the players were caught in the headlines. Captain Colin Maguire made a couple of big saves, Barry Prior looked comfortable at this pace while Sean Flanagan, Mark Plunkett and Stephen Gilheany had better second halves. Having said that, all the best performers were in Brigid's Green & Red as they had just too much class and strength.

Talking Point: The gulf between the counties was all too evident in this game as St. Brigid's were stronger, executed the skills better and were far more composed.

Turning Point: Darragh Dolan's goal six minutes in spelt the end of Aughawillan's hopes as the Leitrim team needed the strong start and not St. Brigid's who went six clear.

Ref Watch: Liam Devaney didn't have a hard day and didn't show a card until 12 minutes from time. Won't have too many days this easy.

Highlight: Not too many from an Aughawillan point of view but Stephen Gilheany's goal did raise a big cheer for the Leitrim lads.

Lowlight: Another heavy defeat for the Leitrim champions in Connacht, just the last in a long line.