Talented U21s look to deliver on promise and shock Galway

If they can get in Galway heads next Saturday and create doubt, they have a real chance 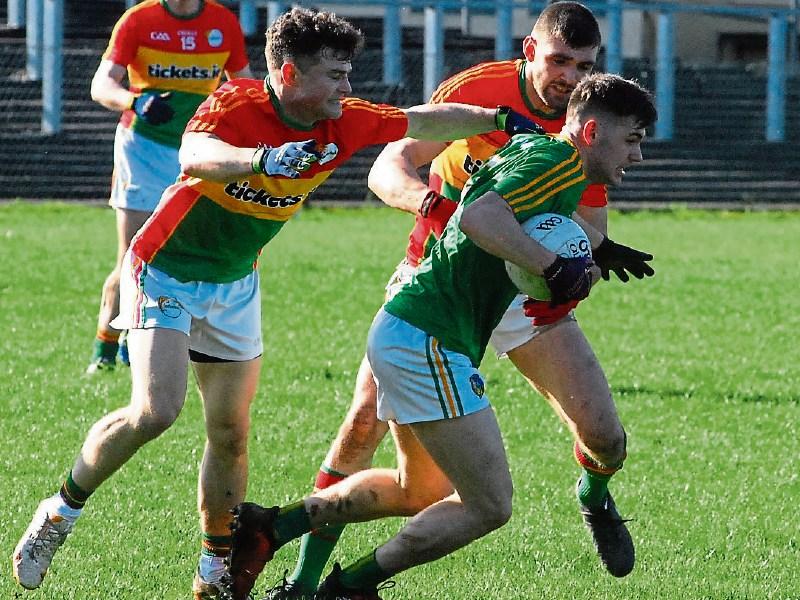 Oisin Madden, pictured in action against Carlow, is one of 11 members of the U21 team on the Leitrim Senior panel - Leitrim face a highly rated Galway on Saturday. Photo by Willie Donnellan

If there is any Leitrim team carrying high expectations this year, it is the County U21 side who face a highly rated Galway next Saturday in the Provincial Championship Preliminary round.

The clash in St. Jarlath’s Stadium in Tuam (3 pm throw-in) has been eagerly awaited not just since the draw was made but since the then Connacht Minor League champions Leitrim were surprisingly dumped out of the Championship by Roscommon in 2014.

Many felt that Leitrim had left a potential Minor crown behind them and regard this year’s U21 campaign as an opportunity to right a wrong.

With 11 members of the U21 panel seeing duty as members of the Senior panel, this is a group with the confidence and talent to repeat the shock win over the Tribesmen from 2014 and set up an equally tough meeting with Mayo.

Dean McGovern, Mark Plunkett, Oisin Madden, Ryan O’Rourke, Keith Beirne, Jack Heslin, Conor Gaffney & Pearse Dolan have all seen game-time with the Seniors this year while Darragh Rooney would surely have joined that list had he not injured his shoulder in the Hastings Cup against Offaly.

It is injuries that concerns Leitrim most - McGovern & O’Rourke were withdrawn from the team that lost to Westmeath but that may be precautionary as the team have been playing a lot of challenge games since then, even having an outing on the morning of last Sunday’s clash against Carlow.

One wonders will Leitrim throw the talented Rooney, who seemed certain to miss out when he broke his shoulder in January, into the fray as the Melvin Gaels man will be short of fitness on a team that is not short of attacking talent.

Picking this team is not easy and the biggest conundrum is who to play in midfield - Mark Plunkett, Dean McGovern, Pearse Dolan, Conor Cullen & Keith Keegan are all ideal candidates for the job and whoever doesn’t get in there will no doubt be spreading around the half-back and forward lines.

Brendan Guckian may look to reinforce a defence that did leak goals in the Hastings Cup with some of those players and the defence remains the main area of concern for the Green & Gold but upfront, Leitrim offer real threat with Ryan O’Rourke, Jack Heslin and Keith Beirne standing out.

But Galway are equally highly thought of and the Tribesmen need no reminding of how good Leitrim are, having lost that Minor League Final three years ago when they led by six points at halftime but failed to score in the second half, Leitrim prevailing by a point.

Falling short seems to be a theme with this Galway side as they lost their Minor Semi-Final to Mayo 3-7 to 1-12, having led right up to the 58th minute. Indeed, this form continued last year in the U21 Championship where they finished with 13 players in a three point loss to Roscommon.

Galway manager Gerry Fahy was in charge of the team last year and will be looking to Michael Daly, son of Galway legend Val, to lead the way from midfield. Daly has seen regular game time with the Galway Seniors this year as have Cillian McDaid, Sean Kelly, Peter Cooke and Ruairi Greene.

McDaid scored 2-1 against Leitrim Seniors in the FBD League in Ballinamore and can play anywhere from midfield up while Kelly boasts great pace with an eye for a score from either half-back or half-forward. Kieran Molloy will add to the options in defence having only joined the team since Corofin’s All-Ireland Semi-Final.

Daly is the jewel in the crown but Peter Cooke, Eoin Finnerty, Colm Mannion give Galway real options and, to reinforce the point, Galway will also be able to call on last year’s All-Ireland Minor Final midfield duo Cein Darcy and John Maher and forwards Dessie Connelly and Rob Finnerty.

Galway experimented a lot during the Peter McNulty Tournament in January beating Tipperary, Laois, Carlow and before losing to Clare in the semi-final but they were rarely near full-strength.

Whatever their strengths and faults, Galway won't make the mistake of taking Leitrim for granted as the Minor League Final two years ago and their own near misses at Minor & U21 level means they will be doubly anxious to win here.

Whether that adds to the pressure on the home team is hard to know - discipline would appear to be a problem in recent years but Leitrim will need to watch their discipline as Peter Cooke has proven to be an excellent freetaker for the Tribesmen.

Make no mistake, Leitrim are under pressure also - the numbers of fans following the team during the Hastings Cup shows there is huge expectation, perhaps more than is on the Senior team, and next Saturday is a huge test of their resolve, character and ability to deliver under real pressure.

This Leitrim team have been together all year and have seen a lot of game time at Senior level. That will stand to them but it also raises expectations. Injuries may play a part in who is available and Leitrim fans will be praying for a clean bill of health.

It is not often that any Leitrim team starts a championship clash with genuine hopes for victory but this U21 team certainly do. If they can get in Galway heads next Saturday and create doubt, they have a real chance.

The Tribesmen are slight favourites and possess real talent in their ranks and they won't be easily stopped. But this Leitrim team have both the pedigree and ability to upset the odds in Tuam.

Expect a thriller that will go down to the wire and expect a massive Leitrim display.