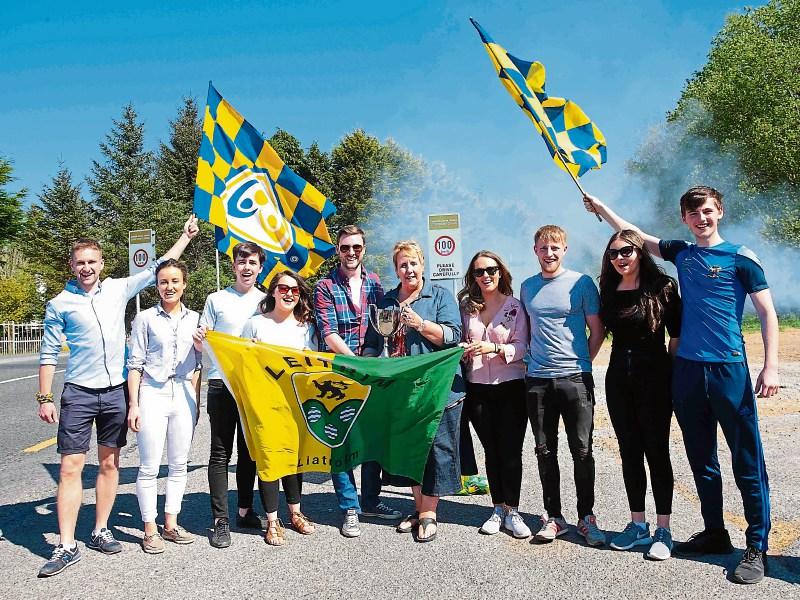 Glencar/Manorhamilton were Leitrim’s only winners at this year’s All-Ireland Senior Scor Finals in Belfast last Saturday as their Figure Dancing team claimed glory.

The sight of the bonfire blazing and the crowds assembled to celebrate on the approaching road to Manorhamilton last Sunday at 3pm was a very warm welcome to the team.

A convoy of cars beeping horns and flags flying took the team, their familyand friends to the market square where they performed the dance that took them to glory. A memorable occasion for Leitrim Scór & the Glencar/Manorhamilton club, their fourth title to bring home in Figure Dance.

The other four acts from Leitrim were not as fortunate to clinch the cup or bring home an All-Ireland medal.

The table quiz took place separately than the main event early on Saturday morning in the Waterfront Belfast.

Leitrim were represented by previous All-Ireland title holders Bornacoola, however the Monaleen club from Limerick emerged the All-Ireland winners. Ferbane of Offaly came in second and St Joseph’s of Westmeath in third.

In Solo singing, Sean O'Heslin's Aisling Maxwell was first of the singers to the stage. A fabulous deliverance of the "Evelyn- Marie" by the Ballinamore lady, unfortunately not to be her day as it was won by Newport Tipperary, Katie Shanahan's "Orphan girl" won the judges vote.

Recitation was a very diverse competition, each of the performers offering very different pieces. Aiden Dockery's deliverance of his self-penned James Connolly piece was passionate and has to be said put all his heart and soul into his rendition on the day but Noel Joyce of JK Brackens Tipperary took the title with his comedy piece.

St Mary’s representing the province in Instrumental Music delivered a fabulous and uplifting array of tunes. A very talented bunch of people, also with previous All-Ireland experience - no doubt they gave the adjudicator from a tough choice to make but the award the title to Newport Tipperary for their third victory of the night.

Glencar/Manorhamilton had a long wait throughout the day as they were last to the stage in the set dance, they once again gave a fabulous performance and danced their feet off but it wasn't to be their night either as Omagh St Enda's lifted the All-Ireland title in this competition.

Overall it was a fantastic weekend with the Leitrim contingent occupying quite a large number of seats in the Waterfront auditorium.