"When we decided to go at them, we were a different team" - Quinn 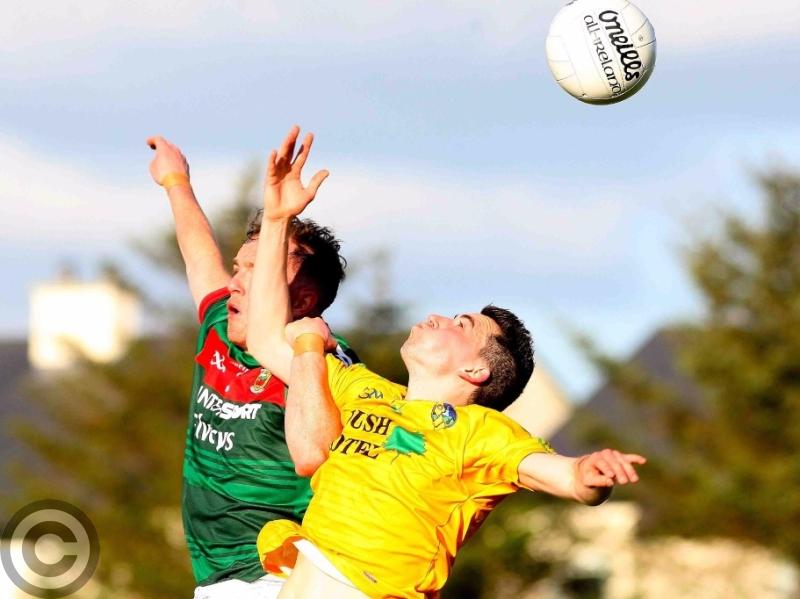 All eyes on the ball. Photo by James Molloy

If there was one man keeping his cool amidst all the celebrations in Charlestown, it was manager Seamus Quinn who immediately recognised the scale of the achievement for the Leitrim Junior team.

“I’m delighted for the lads,” Seamus told the Observer, “As we all know, it is not too often Leitrim gets to win a Connacht title so it is great for the young lads coming through to have one in their cap.

“We’re after beating Galway, we’re after beating Mayo, two great teams in Connacht. I know they are picking from a weaker base for this competition but they are stronger counties than Leitrim and it is great for lads, it will give them confidence.”

Confidence was obviously key in Leitrim’s victory as Mayo completely dominated the opening 20 minutes as the Green & Gold looked laboured and off-the pace - “We were seven points to one down after 20 minutes and I said to them at halftime if you stand admiring teams, they are going to do damage to you.

“It is a little bit of problem in Leitrim, we stand and admire everyone else when we should go at it. When we decided to go at it, we were a different team and we led by three points at halftime.

“We let them back into it and it was very, very tight in the last ten minutes, they got it back to a point and it looked as if Mayo were going to push on and maybe get a draw out of it.

“In fairness, they dug deep and went up the field and got two vital points that put three in it again. And there was huge performances all around from every one of them.”

Seamus paid tribute to the players who responded over both games against Galway and Mayo to represent Leitrim - “We had quality coming on and with this competition, the panel changes nearly from game to game. In fairness, some of the Senior lads on the panel who were playing the last day weren’t allowed to play today with the game in London and we have to be keeping an eye on that too.

“But the lads I rang and asked to come in from different clubs, some couldn’t come in but some came in, like Shane Quinn and Domhnaill Flynn that I rang at late notice, Cathal McCauley as well, Domhnaill had a huge game and Shane had a very solid game too.”

Asked in particular about his own clubmate James Campbell who got the vital goal and Man of the Match Keith Keegan, Seamus commented “James is an honest lad, he will give you what he has and that’s it, he scored 1-1 today.