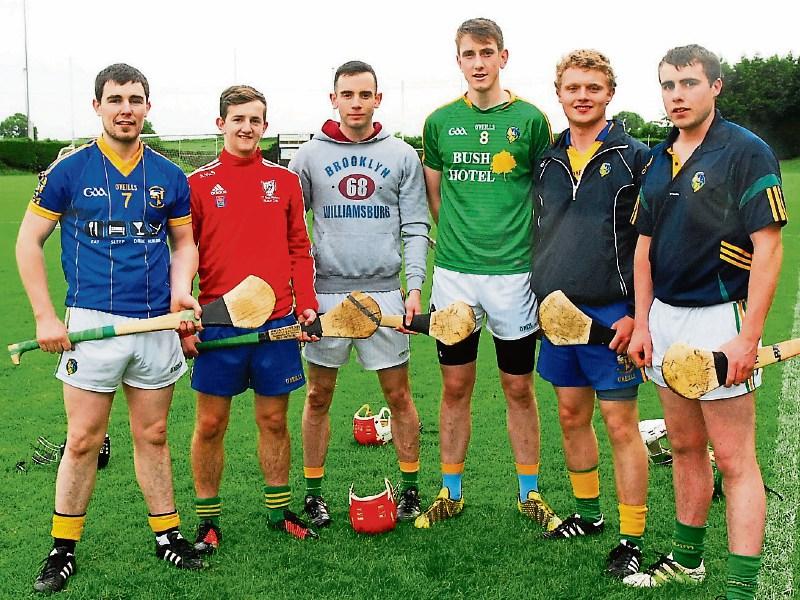 Leitrim captain Karl McDermott from Manorhamilton (third from right) pictured with his Cluainin Iomaint clubmates at Leitrim training ahead of next Saturday's Lory Meagher Cup Final.

Karl McDermott might only be a young man but the Leitrim captain is acutely conscious of the need to inspire the next generation of Green & Gold hurlers ahead of next Saturday’s Lory Meagher Cup Final.

With the dream of playing in Croke Park about to be realised, Karl is looking beyond merely playing at the GAA headquarters and looking for a big performance against Warwickshire as the focus turns from the novelty to the thoughts of performance

“It is great for the development of hurling in Leitrim, it is great to have a day out where it is solely about hurling, let the kids talk about it, get involved and get excited about the game.

Warwickshire beat Leitrim in Birmingham in the group games but the Leitrim captain isn’t reading too much into that result - “Every game we play Warwickshire, it has always been close games.

“I know they have got one or two big names like Liam Watson and that, those players don’t have to stand for that much, you can take them out of the game fairly handy if you get a man marking them well. I’d imagine it will be a fairly tight game and on a day like that, I’d imagine our lads will put it up to them.

“They have never been a whole pile better than us and I reckon, throughout the whole team, it is pretty even and I don’t think it will be much different this time either.

Performing is key for this Leitrim team, a mantra that is repeated time and time again and despite the hype about playing in Croker, Karl is confident of upsetting the odds against the Birmingham outfit - “You can’t let the venue get to you or throw you off your game, you have to concentrate on playing your game the same way as every other day, performing on the day and doing what you have to do.

“It will have ten times the effect if we can win. It will be forgotten fairly quick if we lose. I know it is massive for myself and the lads but I’m only the panel for three years, the likes of Clement Cunniffe, Vinny, James Glancy, Kevin McGrath, they are here ten or 15 years. It is massive for them and a massive breakthrough.

“I would be confident. I think we can perform on the day. I wouldn’t be saying I’m expecting a win but I think we can definitely are in with a good chance of winning it. If we play in the same way as we did against Sligo, there is no reason why we cannot win the game,” concluded Karl.