Only the players get to write the final script in sport

Listen only to your heart this week lads, it's the only muscle that knows if you are truly ready 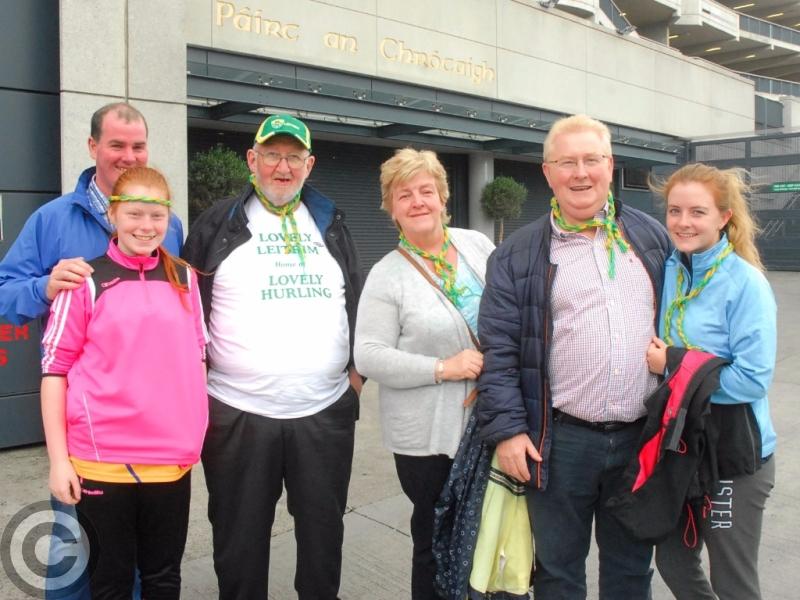 Saturday in Croke Park featured two great roars but unfortunately not the victorious one we were hoping for with the final whistle.

When our hurlers took to the field the roar that welcomed them belied the size of the crowd in the stadium. The lower Hogan Stand came to life with green and gold and familiar accents: both the twangs of the northern glens and the flatter brogues of our southern brethren.

The second roar escorted our lads off the field at half time and acknowledged their great efforts in the first period. They thoroughly deserved their two-point lead, restricting Warwickshire to eight frees, all scored by the talented Liam Watson.

Profligacy following the restart cost Leitrim and their tired legs were stretched to breaking point when reduced to 14 men on 58 minutes. But they gave it their all to the final whistle and we can ask no more.

Their appearance – and the obvious excitement it created for their supporters, families, friends, and the players themselves – begs the question: why do we favour and celebrate a tiered championship in hurling yet object to the very notion of one in football?

To my mind, a tiered championship in football is the future. It will allow the developing counties – of which Leitrim is one – to compete regularly with teams at a similar stage of development.

Participation should be linked to current league standings with victory in the second tier providing the opportunity to play in the first tier either in the same or subsequent season. The latter point would be dictated by scheduling and could play a major role in easing the club fixtures headache.

Were two championship competitions with lesser numbers to be played off at the one time, the season’s duration would be halved offering twice the time for our clubs to flourish.

Reaching the final of the Tommy Murphy Cup in 2006 offered a generation of Leitrim players their only opportunity to play in Croke Park. The competition wasn’t adequately promoted or sufficiently supported by the powers that be. Correcting that would see the games elevated to a status worthy of an All-Ireland competition. Semi-finals and finals could be guarantee to take place in Croke Park.

Tell me that wouldn’t be a prize worth playing for?

But as things stand, we have the prize of a Connacht final to fight for on Sunday. Speaking to a good Roscommon GAA man last week he made a solid effort at playing down his county’s chances against Leitrim in our semi-final clash in The Hyde on Sunday.

It wasn’t an easy job, all things considered, but it’s a great little GAA tradition in the run up to any major match. All serious fans should be adept at belittling their team’s strengths while accentuating any weaknesses.

By the end of any conversation your opposite number should be left in no doubt that the only thing your team is likely to catch is a cold, that they couldn’t kick snow off a rope, and wouldn’t score in Coppers on an All-Ireland Sunday night.

Despite being a seasoned hoodwinker, the man in question knew he couldn’t pull the wool over my eyes. It’s not an easy thing for a proud Leitrim man to admit, but the gap between the two sides has widened significantly in recent years. The leagues don’t lie and in 2017 Leitrim and Roscommon were book-ending them in Divisions Four and One, respectively.

My friend was quick to point out Roscommon’s relegation and the subsequent impact that ‘has had on their confidence’. I countered that Roscommon are usually at their best when their confidence isn’t riding too high. Following some unwelcome public spats earlier this year, Kevin McStay has kept things decidedly low key since the end of the league.

The Rossies have come into the championship under the radar and I expect a powerful, workmanlike, performance from them.

That said, I also expect a Leitrim performance befitting of the stage. A Connacht semi-final against Roscommon in the Hyde brings with it minimum expectation, maximum opportunity.

The potential ambush in Ruislip for this very young Leitrim team has been side-stepped and the anxiety that fixture presented can be cast aside. Leitrim will need to play with great belief, collective purpose, and individual hunger and abandon if they are to knock a much more experienced Roscommon team off their stride. The challenge is enormous.

Five members of the team that started against London are still under 21. The game provided many with their first taste of senior championship fare including Oisin Madden, Dean McGovern, Darragh Rooney, Keith Beirne, Conor Cullen, and Noel & Gary Plunkett, while Ryan O’Rourke and Conor Gaffney had  only enjoyed a brief substitute’s appearance in last year’s qualifier defeat to Sligo.

London will stand to them. But only to a degree. The intensity and physicality levels will be significantly higher on Sunday than they will have ever encountered before. Roscommon will try to blow them out of the water early in the game.

Leitrim’s players’ bodies and minds will need to withstand levels of pressure they previously imagined impossible. If they can come through that fire and dampen it with verve and precision in front of goal they can remain in the game until the final quarter.

I recall midway through the first half of our semi-final against the Rossies in 2000. They were attacking at will from every angle. We were being swamped and as fit as I was, I couldn’t catch breath. Our goal was constantly in danger and we had already conceded one three-pointer. Two more followed within a minute.

The easy thing to do would have been to fold. I just kept ignoring the fire in my lungs and the exhaustion in my legs. I focused on my heart. It was still beating strong. My team mates did the same. The next ball was the only one that mattered. We clawed back three points before half-time. To most supporters, I have no doubt, they seemed insignificant. We still trailed by 3-3 to 0-5 at half-time.

Exhausted, we regrouped. We agreed to die on our feet. To get our shape back. To protect our full-back line by cutting out the supply from midfield. Two more points after the break narrowed the gap further. Then Dermot Reynolds scored his flying fisted goal and suddenly the temperature hit 100 degrees.

The crowd went wild. The sides were level. It was a new game. Energy raced through lungs and legs. Our hearts soared. Roscommon missed a few chances as we pressured every kick. Paul Kiernan released a long-ball into space on their 40.

Seamus Quinn collected it and was met with a shuddering hit; more an assault. It floored him momentarily. He shook it off and rose to his feet as his opponent remained floored. Runners were available either side but he took on the challenge and with the outside of his right boot he sent us into the Connacht final.

Our manager at the time, Joe Reynolds, summed it up afterwards as the skies opened to deliver a rain of biblical proportions on Hyde Park. “We had 15 players who were prepared to die for the jersey. They knew that they had been written off but weren't prepared to accept that fate. We have worked so hard all year and, importantly, we believed in ourselves and each other.”

If anyone tells you that you haven’t a chance on Sunday lads, just remember, only the players get to write the final script in sport. So, don’t be afraid to write yourself into history and pen everyone in Leitrim a long-overdue classic.