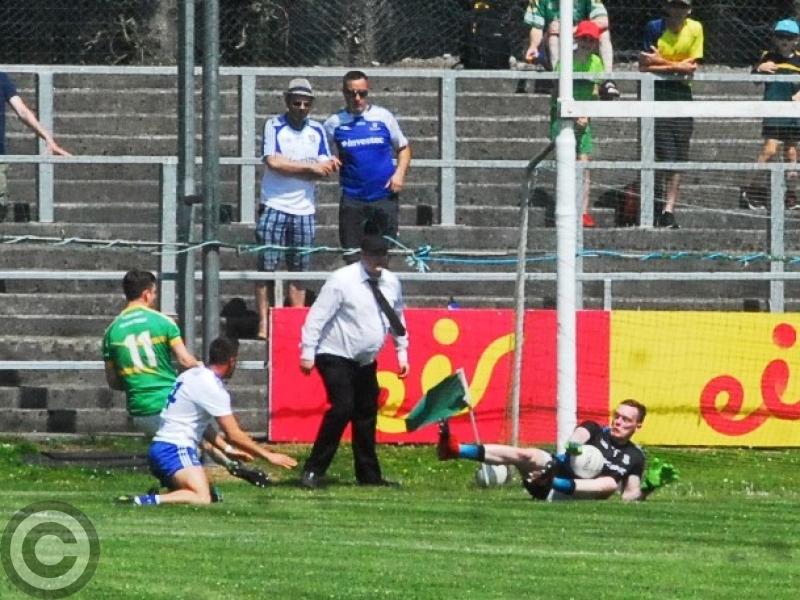 Monaghan’s power, strength and experience were advantages the Division One team possessed in too much abundance for a battling Leitrim to overcome in a sweltering Pairc Sean Mac Diarmada on Saturday afternoon.

A battling Leitrim took the game to the highly rated Farney men but, just as in the Roscommon game, an inability to take some creatively engineered chances came back to haunt Brendan Guckian’s side.

The immense physicality of the Monaghan men meant that chances were at a premium as they allowed Leitrim to run themselves out in the first half before comfortably pulling away in the second half.

Yet this was a much more positive display than the Roscommon game where Leitrim retreated deep - Leitrim dropped a lot of men back when needed but they stepped up and attacked the Monaghan men and created chances, chances that unfortunately were not taken.

A lot of that had to do with the immense pressure Monaghan put on Leitrim’s shooters but there were two goal chances for Ryan O’Rourke and Darragh Rooney that might have rewarded Leitrim’s early adventure and spirit far more realistically.

Tactically, Monaghan’s decision to use long kick passing and let the ball do the work probably paid longer term dividends against Leitrim’s high energy, high tempo game but Leitrim were always going to have to work harder if they were to compete against the Ulster men.

What might have given them a boost would have been what looked like a red card for Conor McManus, Monaghan supporters agreeing that the sharpshooter was very lucky to escape with a yellow card from Fermanagh official Niall Cullen for a wild lunge on Micheal McWeeney.

It would be hard to see a less well known Monaghan man or indeed a Leitrim player escape with the ultimate sanction for a similar offence. A man advantage in the oven-like conditions endured by players on Saturday afternoon would have been an enormous boost to the Green & Gold. 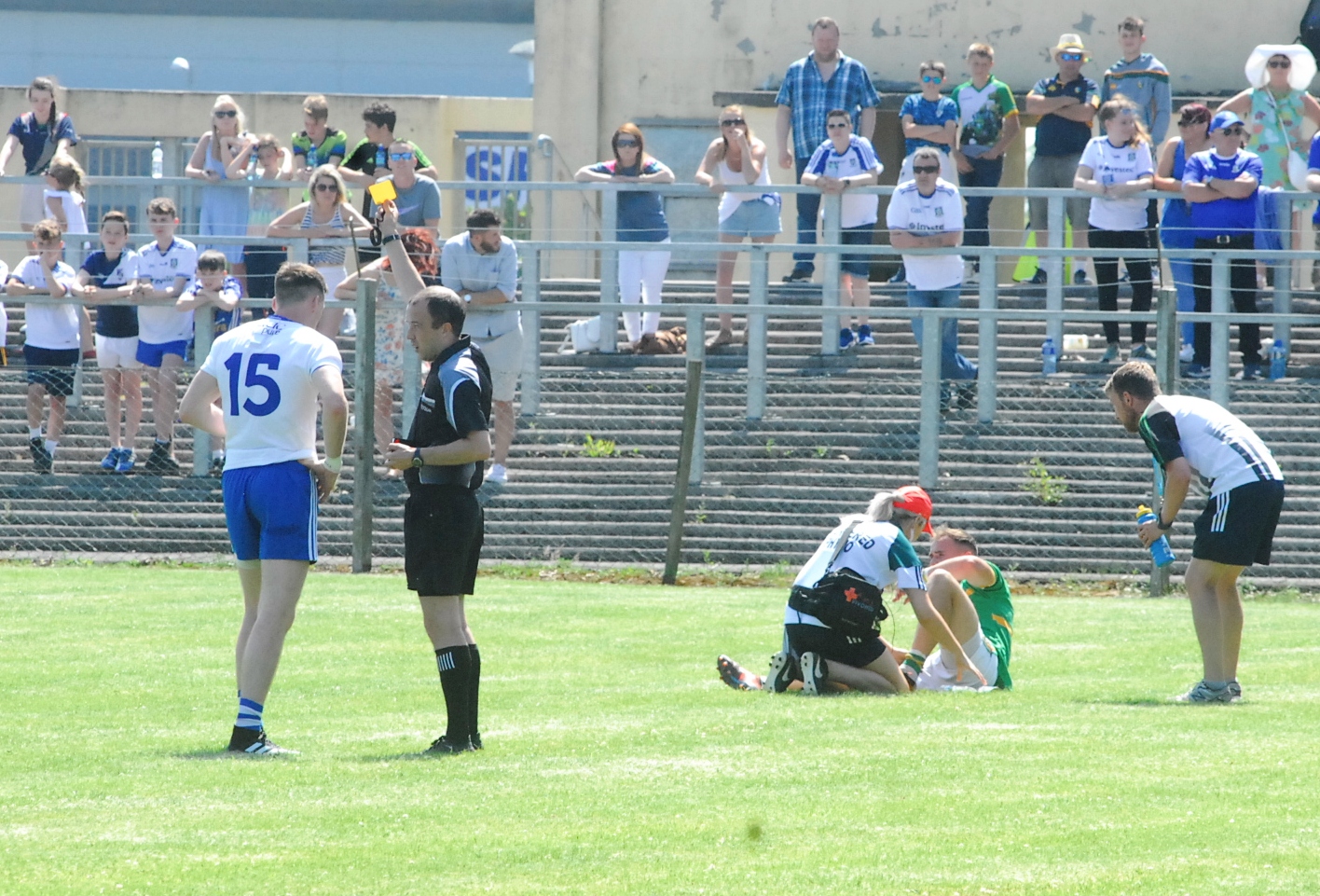 Monaghan opened the scoring with a Conor McManus point after just 40 seconds and Monaghan almost broke through for a goal when the kickout was snaffled but McManus drove the goal chance wide.

Jack Heslin opened the Leitrim account when a quick pass found the speedy Gortletteragh man and he fired over the bar. Both teams missed chances, McCarthy dropping a free short and James Rooney’s long ball being put out for a fifty.

Donal Wrynn put the 50 wide while Damian Moran had a long range shot held by Rory Beggan and Monaghan went back in front when Conor McCarthy scored a well worked point under pressure on nine minutes.

Leitrim hit back a minute later, Jack Heslin notching his second after patient play before the wing-forward broke and scored from a tight angle.

Fans thought Leitrim were going to get the goal they needed on eight minutes when a high ball broke for Ryan O’Rourke leaving the Fenagh St. Caillin’s man clear on goal. Unfortunately Monaghan’s defenders didn’t give up the chase and managed to put enough pressure on O’Rourke as he kicked that the ball sliced into Rory Beggan’s hands.

Monaghan made Leitrim pay when McManus made a high catch from a long ball and fed Colin Walshe who was fouled McManus pointing the free.

The contrast was evident 13 minutes into the half when a long ball found Darragh Rooney. He turned his man and appeared to have space in front of goal but his shot was blocked by the recovering defender, Donal Wrynn putting the resulting fifty wide.

Emlyn Mulligan tied the scores with a free on 15 minutes but then played a free short to O’Rourke who lost the ball under pressure and Monaghan broke for Fintan Kelly to point.

Monaghan felt they should have found the net when Darren Hughes thundered through only to see his goal shot saved by Diarmuid McKiernan, the resulting fifty from Rory Beggan sailing high over the bar.

Monaghan were beginning to pull away and when Jack Heslin was dispossessed, Monaghan countered for Conor McCarthy to fire over a sweet point on 20 minutes.

The one item of controversy came on 23 minutes when Conor McManus got the benefit of his fame, a wild lunge connecting with Micheal McWeeney’s ankle and you’d have felt that if it was a less well known Monaghan player, it would have been red.

Wrynn and Mulligan and Thomas Kerr for Monaghan all missed chances but Monaghan started to pull away with a McManus free and a Karl O’Connell point. McCarthy added a free five minutes before the break as Monaghan started to boss the game against a wilting Leitrim.

Leitrim, who had already brought on Dean McGovern for Brendan Gallagher, made another change with Cillian McGloin replacing Noel Plunkett but it was Monaghan who now missed a goal chance, Conor McCarthy putting two much power into a close range shot that should have found the net after a mazy run.

Emlyn Mulligan missed a free but from the kickout, Colin Walshe’s run saw him play a one-two with Conor McManus before scoring. Aidan Flynn saw an effort hit the post and Cillian McGloin dropped one short.

The contrast with Monaghan was telling, McManus popping over a clas point after a James Rooney pass was intercepted. The lead grew with a 52 yard Beggan free on 10 minutes before Ryan O’Rourke got Leitrim’s first score of the half with a nice point on 14 minutes.

Monaghan then had an attack of the yips, hitting four wides in as many minutes and a good run from Paddy Maguire led to Jack Heslin firing over on 19 minutes.

Shane Quinn had a wide but Ryan Wylie cut in along the endline to point with sub Paudie McKenna adding another from the kickout.

Emlyn Mulligan put over a free eight minutes from put over but Monaghan responded with points from McKenna and Jack McCarron (free) before the Kinlough veteran converted another free after a foul on Shane Quinn.

Monaghan, however, were not finished and after a Dessie Ward point, the finally got the goal they had sought. Shane Quinn hit a bad wide and from the kickout, Rory Beggan found Shane Carthy who then got the ball to Owen Duffy. He advanced on goal and then passed across to Conor McCarthy to fist to the net.

Emlyn Mulligan hit Leitrim’s last of the day from a free but Monaghan had the last word when, despite two bad wides, Jack McCarron put over a free to seal a 13 point victory.