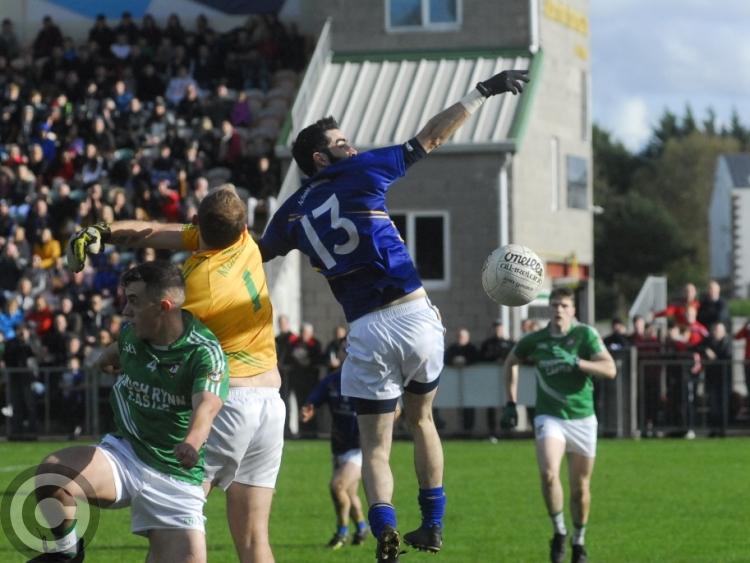 Niall Beirne gets his hand to a cross during the first half. Photo by Willie Donnellan

Underdogs they may have been but Aughawillan underlined their Champions class with a truly amazing final quarter to snatch a deserved two point victory over Mohill in Pairc Sean Mac Diarmada on Sunday.

Aughawillan had trailed by four points early in the second half but they never let their heads drop and as Mohill seemed to lose their way in the final ten minutes, Aughawillan revelled in the pressure to take the title.

Gary Plunkett was deservedly named Man of the Match with a superb display as he led the Aughawillan attack from the front but there were also big displays turned in from Pearce Dolan, Mark Plunkett, Morgan Quinn and Barry Prior.

For Mohill, Domhnaill Flynn, Shane Quinn & Alan Armstrong led the defence of the title but when the pressure was greatest, it was Aughawillan’s players who responded best.

Ciaran Gilheany opened the scoring with a lovely first minute point but as both sides missed chances, Keith Beirne dropping a shot into the keeper and Morgan Quinn doing likewise from a free, the scores were tied with a great move that ended with Domhnaill Flynn firing over on four minutes.

Keith Beirne dropped another free short before Noel Plunkett got to a dropping shot from his brother Gary, the ball going over the bar but almost straight away, a great run from Keith Keegan ended with Keith Beirne firing over from close range.

Noel Plunkett saw an effort blocked from and from that move, Mohill moved the ball down the left wing, Keith Beirne’s shot seemingly easy meat for keeper Colin Maguire but Ronan Gordon, running at full-tilt, managed to get a hand to the ball and divert it to the net.

Gary Plunkett responded with a free which was matched by Keith Beirne, set up by Shane Quinn disrupting the kickout. Gary Plunkett again swapped scores with Ronan Gordon before Beirne with a 48 yard free edged Mohill four in front.

Patient play and a Noel Plunkett pass released Morgan Quinn for a fine point and the gap was down to two when Gary Plunkett hit his third of the half before he then produced a brilliant run to score under fierce pressure.

Keith Beirne put over a free while Niall Beirne was inches away from connecting with a Stephen Gilheany cross. But the last score of the half fell to Alan McLoughlin when Aughawillan lost their own sideline ball and Domhnaill FLynn picked out a great pass. 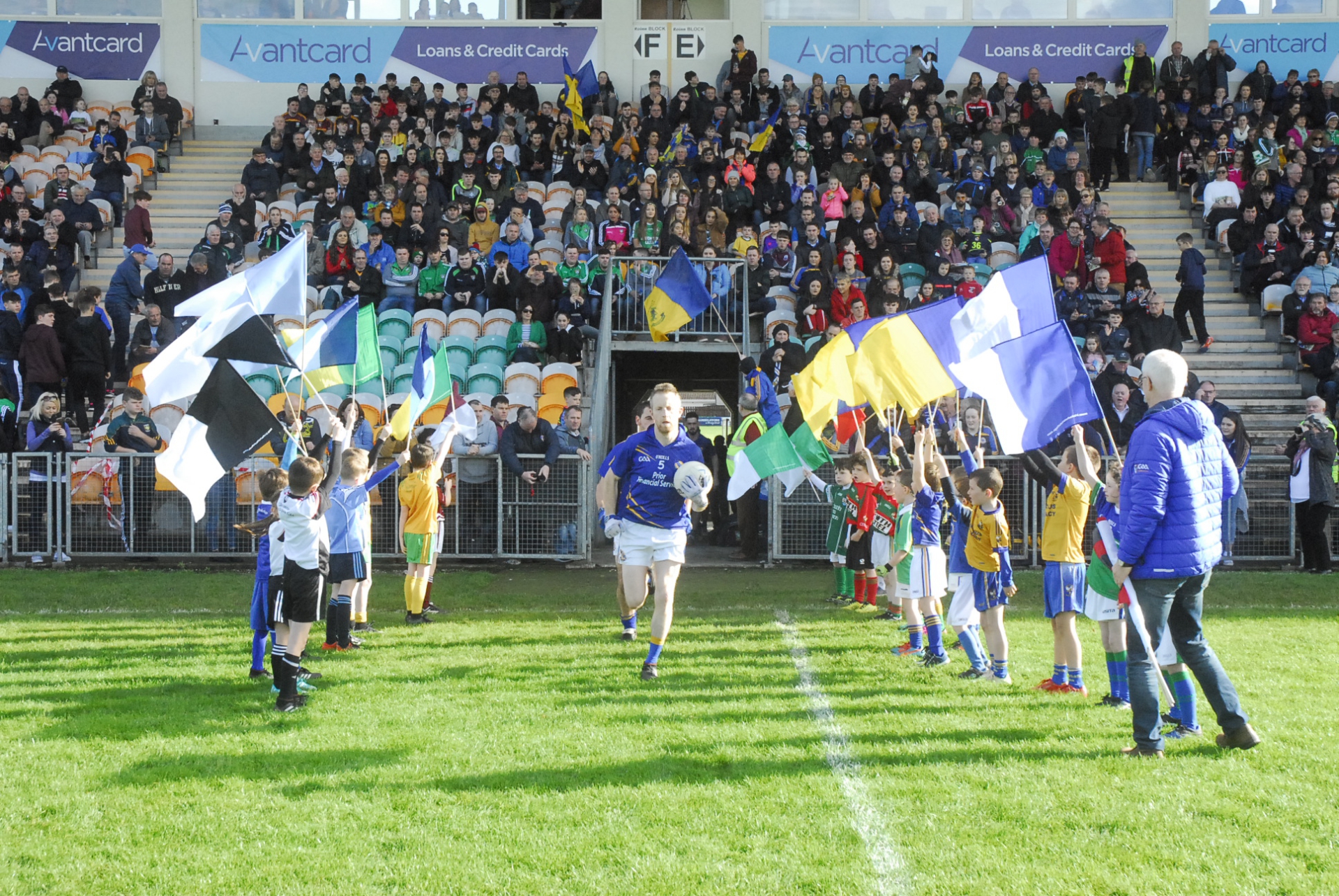 The halftime score stood at 1-7 to 0-7 but the second half started with Aughawillan dominating the play only to kick some horrible wides and they seemed to play the price when Flynn sauntered forward to score a lovely point six minutes into the second half.

Aughawillan slowly began their fightback when Morgan Quinn hit two points either side of the introduction of Sean Flanagan and Padraig Tighe had to do well to fist away a ball from Barry Prior with Niall Beirne steaming in.

Midway through the half, Mark Plunkett dodged around his man and scored a brilliant effort from wide right on the wing to leave a point in it. Keith Beirne missed a free but a great move out of defence ended with Alan McLoughlin scoring a fabulous effort from 50 yards with less than eight minutes to go.

If Mohill thought that ended the storm, they were mistaken as Mark Plunkett drove a fifty over the bar a minute later and after a bad wide from Ronan Kennedy and then a lost possession, Sean Flanagan got on the end of a move to fire over the bar and tie the scores.

Keith Beirne shot wide when a score looked on but Aughawillan showed their nerves of steel when he cut through the defence and curled an outrageous effort over the bar.

Mohill, like champions, tried to fight back but saw a Ronan Kennedy shot blocked and Shane Quinn’s follow-up hit the woodwork and rebounded clear.

And to keep his record up of scoring the last point in the last three Aughawillan wins, Mark Plunkett then finished off an Aughawillan break with a fabulous point to seal victory. 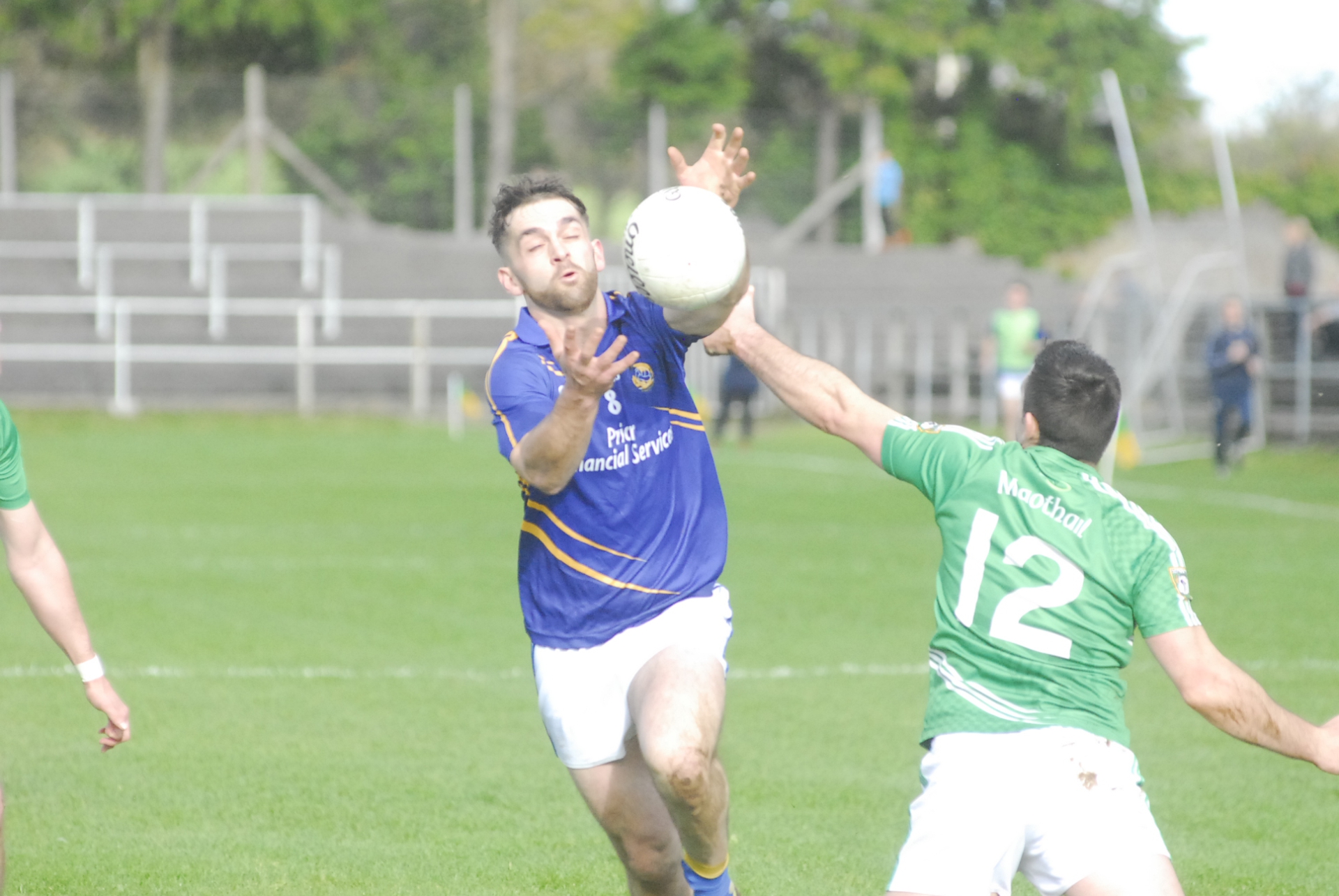 Man of the Match Gary Plunkett steers the ball away from Danny Beck. Photo by Willie Donnellan

SEE THIS WEEK'S LEITRIM OBSERVER FOR ANALYSIS AND REACTION