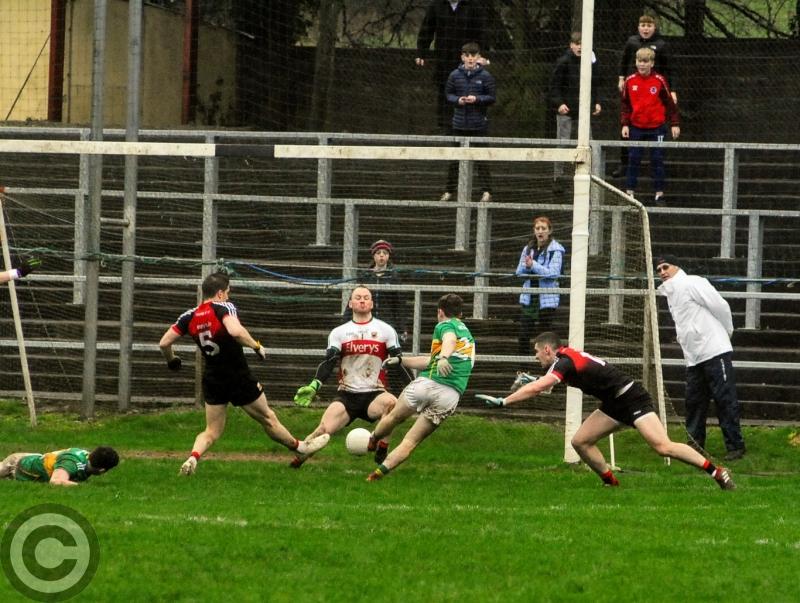 Ryan O'Rourke drives the ball to the Mayo net. Photo by Willie Donnellan

For the second year in a row, Leitrim secured a hard fought draw in the FBD Insurance Connacht League against Mayo but this time there was defeat also as Terry Hyland’s side lost the first ever penalty shootout in gaelic football.

Damian Moran’s controversial equaliser nearly four minutes into added time forced a draw and a penalty shootout with Mayo winning the shootout 4-1 as Jason Doherty, Brian Reape, Fergal Boland and Evan Regan all finding the target with Ryan O’Rourke the only one to find the net for Leitrim.

The controversy came as Dean McGovern, who had clearly received a second yellow card and a red card moments earlier, continued to play on and actually provided the final pass to Moran for the equalising score.

It was a bizarre moment at the end of an enthralling match that shouldn’t overshadow an impressive Leitrim performance that improved greatly in the second half and one that came within an inch of two of securing a famous victory over Mayo.

It didn’t look like that for long periods of the first half as, despite three points in the first three minutes from Pearce Dolan, Shane Quinn and Dean McGovern, Mayo actually laid the foundations for their dominance when Brian Reape beat two Leitrim defenders rather easily to crash home a fantastic goal.

Pearse Dolan responded with a point for Hyland’s side but Mayo broke clear seven minutes and Fergal Boland made no mistake for a second Mayo goal.

Leitrim almost responded with a goal of their own when a great move saw Shane Moran burst free only to see his shot cannon off the post with Jack Heslin driving the rebound wide of the Mayo goal.

Mayo started to pull away with points from Boland, Evan Regan, keeper Rob Hennelly, Eoin O’Donoghue, Reape and Colm Moran but three crucial points from Jack Heslin, Cillian McGloin and Evan Sweeney kept Leitrim in touch on a halftime scoreline of 2-9 to 0-8.

Mayo stretched the lead to eight points but the early action in the second half was notable for an injury sustained by Aidan Flynn that forced him from the game. His replacement Mark Plunkett helped firm up a Leitrim defence that started playing with extra players back.

Jack Heslin almost had a goal just after the break but his brilliant eight minute point started off the Leitrim fightback and the arrival of Ryan O’Rourke on, ironically he looked as if he was about to replace Heslin, hastened the fightback.

Equally ironic was the fact that Leitrim’s purple patch came when they were down a man, Dean McGovern black-carded and sin-binned for ten minutes for deliberate blocking of a defender but it didn’t seem to do Leitrim any harm.

First a bad Mayo pass was intercepted and Heslin took off on a run feeding O’Rourke. The Fenagh man’s shot was saved but the ball fell to Evan Sweeney for a tap in. Seconds later, Mayo again turned over possession, Heslin again surged in and this time O’Rourke drilled his shot to net.

Leitrim incredibly drew level with 16 minutes to go when Domhnaill Flynn converted a free but Mayo hit back instantly, Fergal Boland pointing after Mark Plunkett turned over the ball. Jason Doherty followed up with a free a minute later to increase the lead to two.

Evan Sweeney narrowed the gap from a free before he almost grabbed the winning goal, intercepting a sloppy Mayo pass but his powerful shot crashed off the crossbar and rebounded clear.

Mayo were missing chances but so were Leitrim, none more so than when Ryan O’Rourke broke free but shot badly wide when a goal looked on.  And Mayo looked to have secured the win when Fergal Boland thumped a huge effort right over the middle of the crossbar as the game ticked into added time.

The drama continued in extra-time - Evan Sweeney worked a one-two with Shane Moran to brilliantly score from the corner but the drama only heightened, Dean McGovern earning a yellow card to go with his black, leading to a red, both of which were shown by referee James Molloy.

Incredibly the Galway official allowed play to continue without checking if McGovern left the field and 30 seconds later, the Ballinamore man provided the final pass for Damien Moran to score a wonderful equalising point.

With Mayo complaining over the score, the Galway official blew full time, leading to a first ever penalty shootout. Mayo went first with Jason Doherty driving the ball low to the bottom left corner.

Ryan O’Rourke followed for Leitrim, Mayo keeper Hennelly getting a heavy touch to the ball but it went beneath him and into the net. Brian Reape then drove the ball to the net for Mayo but Mark Plunkett was unlucky to see his shot hit the post and rebound clear.

Fergal Boland followed with another successful kick for Mayo but Evan Sweeney drove his kick a yard wide of the left hand post leaving Evan Regan with the task of sending Mayo into the semi-finals against Galway, something he duly did with great confidence.