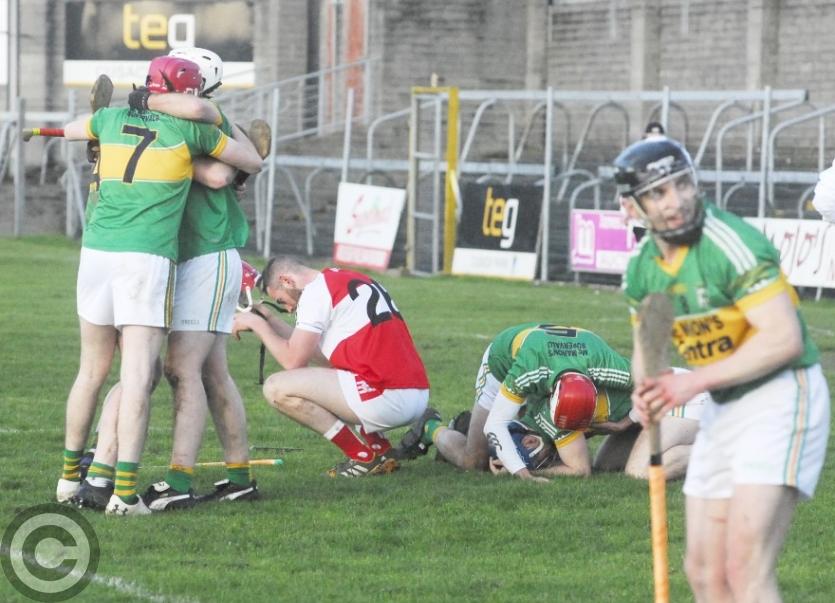 Carrick Hurlers endured cruel heartbreak as their bid to reach the AIB All-Ireland Junior Club Hurling Final ended with a one point defeat to Castleblayney Faughs in TEG Cusack Park, Mullingar on Sunday.

Trailing by five points eight minutes into the second half, Carrick launched a furious fightback that saw them claw back the lead inch by inch but they ran out of time as the Monaghan team hung on desperately in the closing stages for victory.

A block on a Colm Moreton shot and a brilliant save by the Monaghan keeper from a Liam Moreton effort denied Carrick the goal that would have driven them into the All-Ireland Final as the Leitrim and Connacht champions chased the game with furious determination.

Carrick had been lacklustre in the first half and had inaccuracy from Castleblayney, who had five missed frees, to thank for the fact that they only trailed by two points at the halftime break, 0-6 to 0-4.

The Monaghan men, however, made a big breakthrough early in the second half when Carrick keeper Declan Molloy was caught in possession and Mark Treanor was taken down. Castleblayney's impressive Hugh Byrne cleverly drove the penalty into the astro-turf patch just in front of Molloy, the ball bouncing over the stick of the keeper and into the net.

A further Byrne point under enormous pressure from the sideline gave the impression the slicker stickwork of the Monaghan men was going to prove crucial but instead, Carrick roused themselves and slowly but surely started to dominate the final 20 minutes of the contest.

Two Cunniffe placed balls reduced the gap but Castleblayney keeper Paddy Collins made a huge save from a Liam Moreton effort but Stephen Goldrick's point, Carrick's first from play, 12 minutes of time sparked a massive surge of support from the stands.

That left a goal between the teams and with Castleblayney unable to get any traction in attack, Carrick were heartbroken to see Conor Beirne and Cunniffe drive chances inches wide. Cunniffe then broke a tackle and charged through for a vital score with less than two minutes to go.

Sub James McNabola scored a superb effort after a fantastic catch to leave just a point between the teams a minute into added time but despite four minutes of added time, Castleblayney's defence suddenly firmed up and held Carrick out for a narrow, narrow win.

SEE THIS WEEK'S LEITRIM OBSERVER FOR REPORT, ANALYSIS AND REACTION