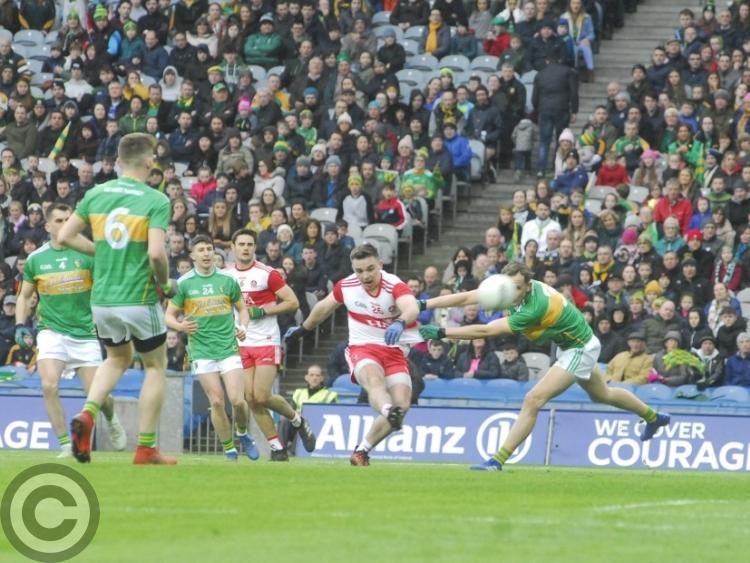 Leitrim’s dreams of lifting silverware in Croke Park was ended by a clinical Derry despite a battling performance in Saturday’s entertaining Allianz League Division 4 Final.

THE LEITRIM OBSERVER'S MATCH COVERAGE OF THE ALLIANZ LEAGUE DIVISION 4 FINAL WAS BROUGHT TO YOU BY WWW.ENJOYLEITRIM.COM AND LEITRIM TOURISM. SIMPLY CLICK ON THE IMAGE TO LEARN MORE ABOUT ALL THE GREAT ACTIVITIES, SIGHTS AND ENTERTAINMENT LEITRIM HAS TO OFFER.

Leitrim had looked poised to rock the unbeaten Oak Leaf men when they led by three points after a vibrant opening 20 minutes but an unanswered six points before halftime from Derry saw them wrest control of the game and put them in a position to win.

The Ulster side led by six points midway through the second period with Shane McGuigan leading the way in attack and despite Leitrim scoring five points in the last 15 minutes with a stirring rearguard action, Derry held out for the victory.

Nevertheless, it was an excellent display from Terry Hyland’s troops as they stood their ground and went toe to toe with a vastly experienced Derry side and did not look out of place in the grandeur of Croke Park.

Leitrim got off to a blistering start with a Dean McGovern point just 45 seconds into the contest, set up by good work by Emlyn Mulligan. Ryan Bell got on the end of a good Derry move to respond but an arrow of a kickout found Shane Moran and he surged forward to score from distance.

Derry kept the scoring pace going with Enda Lynn drilling a shot over the bar before a good patient move ended with Bell, who didn’t play against Leitrim in Celtic Park, firing over.

Leitrim may have settled well but not everything was going well as Domhnaill Flynn missed a free, Emlyn Mulligan shot wide when a score seemed certain and Ryan O’Rourke put a free wide.

Evan Sweeney settled Leitrim when he made a good mark from a Mark Plunkett pass and then fired over from his free kick on ten minutes. Leitrim were flying now, defending well and breaking up Derry attacks while attacking at incredible pace themselves and a foul on Sweeney allowed O’Rourke to tap over the bar.

A foul on Shane Moran saw Domhnaill Flynn convert the free and when a Derry attack broke down, a wonderful counter-attack resulted in Ryan O’Rourke chipping a lovely point over the bar on 16 minutes.

Little did we know that this was Leitrim’s high point with O’Rourke and Domhnaill Flynn both shooting wide while an Aidan Flynn foul allowed Christopher Bradley tap the free over the bar. Ray Mulvey responded with a typical surging run that ended with a successful shot from distance.

That was Leitrim’s last score until the second and Derry took control with six unanswered points before halftime, Derry doing to Leitrim what Leitrim had done to every team so far this year in the League.

Enda Lynn pointed after Hawk-Eye was called into action with a bad miss from Shane Moran being punished by a Bell free ten minutes before the break. A Leitrim attack broke down and Derry’s counter attack led to a well worked Shane McGuigan point.

Derry briefly threatened a goal only for Emmet Bradley to fist the ball over the bar as he bore down on goal and barely a minute later, in added time, another turnover led to another point for the wing-forward. 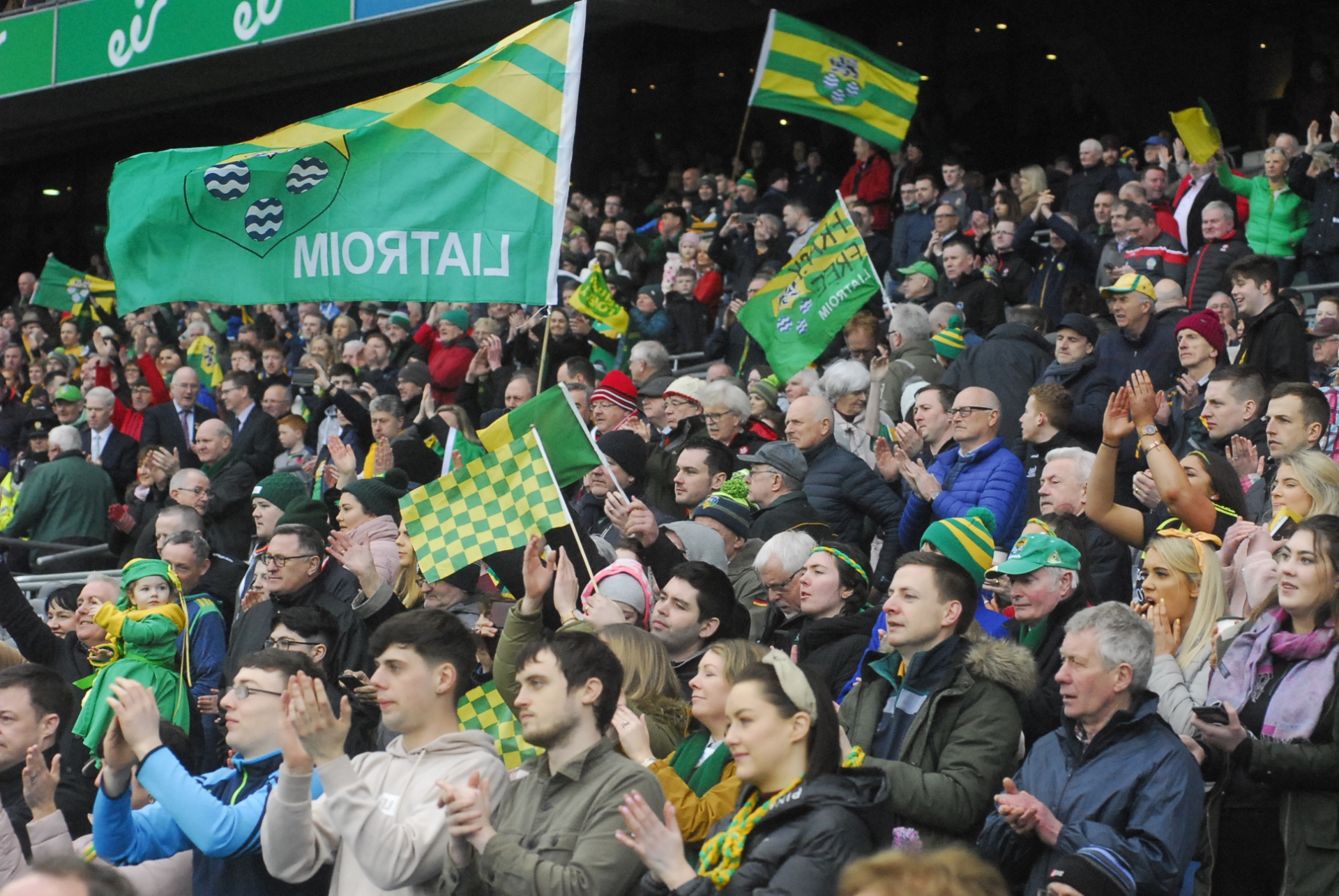 Leitrim fans applaud the team off the field after the final whistle. Photo by Willie Donnellan

That left Leitrim trailing 0-10 to 0-7 at the break with Emlyn Mulligan reducing the gap with a fine point from a tight angle barely half a minute into the second half. Derry almost responded in deadly fashion but Cathal McCrann made a spectacular save at the feet of Ryan Bell but a high led to a mark for Christopher Bradley, easily converted in front of the goal.

Ryan O’Rourke put over a third minute free and the tit for tat nature continued as Christy McKaigue finished off a good move with a point. Paddy Maguire copied McKaigue by joining his attack for a sixth minute point but it was Derry setting the pace, Padraig Cassidy starting a move and then finishing it for Derry’s third point of the half.

The Oak Leaf county then started to pull away with Shane McGuigan at the heart of their match winning efforts - a huge point from distance on eight minutes was followed by a well worked score minutes later and he made it three on the trot from a free on 13 minutes.

Derry now led by six and incredibly decided to remove the effective Enda Lynn while Leitrim also abandoned the sweeper system. Mark Plunkett’s solo effort, that saw him spin to avoid a tackle before scoring from distance, was Leitrim’s first score in 11 minutes.

Straight away, Derry hit back with a monster 50 yard effort from captain Christy McKaigue while Leitrim had further bad wides from Domhnaill Flynn and Dean McGovern.

Evan Sweeney pointed when the doors appeared to be slightly open for a goal chance with 11 minutes to go and captain Micheal McWeeney raised Leitrim’s hopes with a well worked point two minutes later, cutting the gap to four.

Derry responded, as they always did, with a Christopher Bradly free before a Ryan O’Rourke free with less than five minutes to go reduced the gap to four once more. McGuigan and O’Rourke would swap points but the gap remained four points as the game entered injury time.

Leitrim went looking for a goal and Evan Sweeney’s massive long range shot dropped short but Shane Quinn had got himself into the goalmouth, almost making a connection that could have led to a goal.

Derry broke upfield and sub Niall Toner held off his man to score Derry’s final score. Leitrim kept battling away and despite dropping a ball into the goalmouth, they never got the goal chance they need with only a point from Ryan O’Rourke leaving them four points adrift at the final whistle.

SEE THIS WEEK'S LEITRIM OBSERVER FOR IN-DEPTH ANAYLSIS AND REACTION