Glancy goal rescues victory from the jaws of defeat 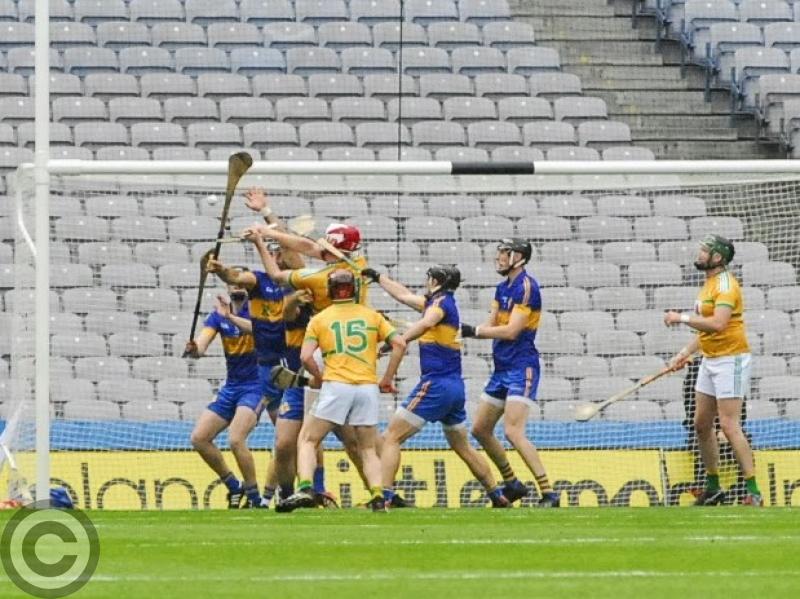 Colm Moreton hooks the sliothar over the bar for a point Picture: Willie Donnellan

A dramatic James Glancy goal after more than three minutes of injury time kept Leitrim’s hopes alive in the Lory Meagher Cup Final in Croke Park before the Green & Gold surged to victory in a drama filled extra-time encounter with Lancashire.

The Exiles looked odds on to lift the title as they led by three points with the five minutes of added time quickly ticking away but in true never say die spirit, Leitrim refused to give up and Glancy’s goal, albeit with the aid of a massive deflection, saved their skins.

In extra-time, Leitrim made the most of their reprieve as they into a five point lead with time almost up but Lancashire struck a late 1-1 in added time at the end of extra-time to leave the Green & Gold on tenterhooks.

Thankfully, the final whistle sounded seconds after Lancashire’s goal and wild Leitrim celebrations broke out on the field as the Green & Gold celebrate a first ever national title won at GAA headquarters.

Leitrim had started the better in a fast paced opening with Gavin O’Hagan particularly effective early on. With Ronan Crowley uncharacteristically missing some early frees, it took an opportunistic goal from Colm Moreton when he robbed the keeper to score to give Leitrim the advantage.

Further points from Moreton, Clement Cunniffe and O’Hagan saw Leitrim open a four point lead before Crowley brought Lancashire back into the contest with a goal just before the break.

But great scores from Karl McDermott, Colm Moreton and Cunniffe suggested that Leitrim were well on the way to a comfortable victory as they led 1-10 to 1-7 at the break.

However, the second half belonged to Lancashire who bossed the battle around the middle of the field and with Darren & Ronan Crowley so effective for the Exiles, they turned a three point deficit into a four lead with ten minutes to go.

But Leitrim refused to give in and a patient move saw the sliothar moved across to centre-back James Glancy. His shot looked on target but fortune shone on Leitrim again when the ball deflected off a defender and wrong footed the keeper, ending up in the net.

The game then went to added time and with Lancashire struggling with injuries, it was Leitrim who took control of the tie with three points from two O’Hagan frees and one from sub Zak Moradi to lead by three at halftime of extra-time.

O’Hagan found Cunniffe with a wonderful point to stretch the lead but Lancashire wasted a goal chance as Tommy Maher skimmed his shot high over the bar.

The impressive O’Hagan would add two further points, the second a penalty after Clement Cunniffe was pulled back and that seemed to seal Leitrim’s victory. However, Lancashire showed real guts as they fought back with a Crowley free and a goal from Patrick Duggan to leave just a point between the sides at the final whistle.