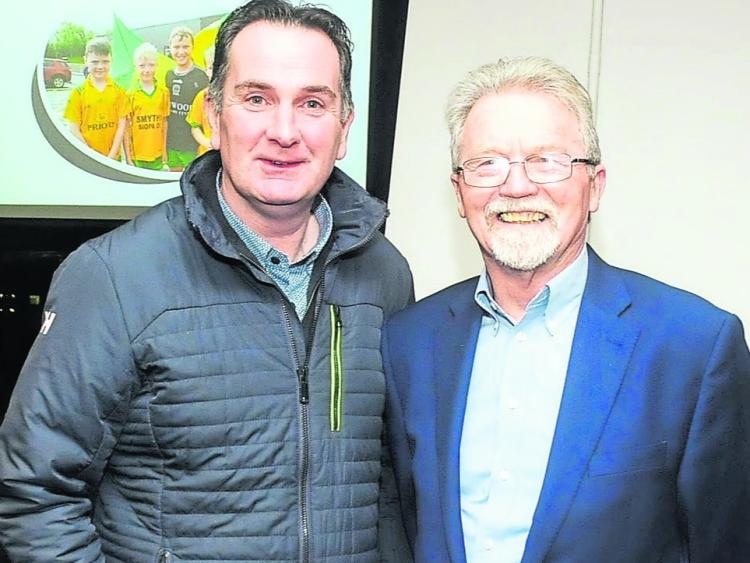 Drumshanbo's Paul McGowan of Westlink Coaches, Drumshanbo met up with Manorhamilton's Frank Brady who flew back from New York for last Thursday's launch of the Leitrim Supporters' Club in Croke Park

We’re just 22 days into the new year and already we’re at the most exciting time of the year for most GAA fans, the start of the Allianz Leagues and the chance to compete, to contest and to battle on an equal footing and perhaps the chance of glory.

It is the time of the year that gets most fans talking and dreaming of what might be, the most democratic of competitions that pits you against teams of equal ability, your standing determined by your performances and not some line drawn on a map hundreds of years ago.

Leitrim’s men head into a daunting Allianz League Division 3 knowing that it will take a series of performances not seen since the glory days of the 90s for Green & Gold to stay in a mercilessly tough division let alone win promotion.

But the important thing is that Leitrim have won the right to test themselves against Cork, against Down and against whoever else they will face on the fields of Ireland this Spring, their performances last year giving them that honour and assuring them that they are of that standard.

It’s up to Leitrim to earn that status once again this year, rise up or fall back but whatever happens, it is on the fields of play that Leitrim’s fate will be determined, against teams of their own standard and not in some lopsided championship that seems fated not for fairness but for preserving the status quo of gaelic game’s big guns.

The GAA finally seems to be coming around to the fact that the League, not the championship, provides the best and most interesting stories and if they had any sense, they’d flip the competitions around so that the Championship is run on a League basis.

That’s one of the suggestions in the GAA Fixtures & Task Force committee report that comes before next month’s GAA Congress, that the Provincial championship be played as a stand alone competition in March/April with the “League” replacing the championship during the height of Summer.

If anything, it would give counties all over Ireland some hope that all the hard work of their players might lead to some reward other than the sort of defeats Leitrim have endured during this decade.
We only have to look at our Ladies and Hurling teams, also setting out on their own league adventures this coming weekend, to know what a proper Tiered championship can bring. It can bring competitiveness and dreams of glory and most importantly of all, hope.

The hurlers face a massive challenge this year with a new manager in Olcan Conway but they go in buoyed by victory in the Lory Meagher Cup and dreaming of league glory and testing themselves at a higher level - it promises to be an exciting year for the small ball devotees and one that I’m really looking forward to.

Hugh Donnelly takes the Ladies Senior team to Derry next Sunday in another new beginning - it has been a tough few years for the Ladies team with struggles on and off the field but a new committee allied with a rejuvenated panel infused with a new generation of young players means that this could yet be a very exciting year for the Ladies game.

Both the Ladies and the hurlers benefit from a tiered championship and it is something I think the Men's football game deserves too. But that's an argument for another day and right now, it is hard not to be excited by the start of another “League season”- lots of matches, lots of challenges and a belief that this might be our year.

The best of luck to the three Leitrim teams commencing their Leagues this weekend - there will be highs and lows, disappointment and celebration but it is definitely the most exciting time of the year. And let's hope we have plenty to cheer for the rest of the year.