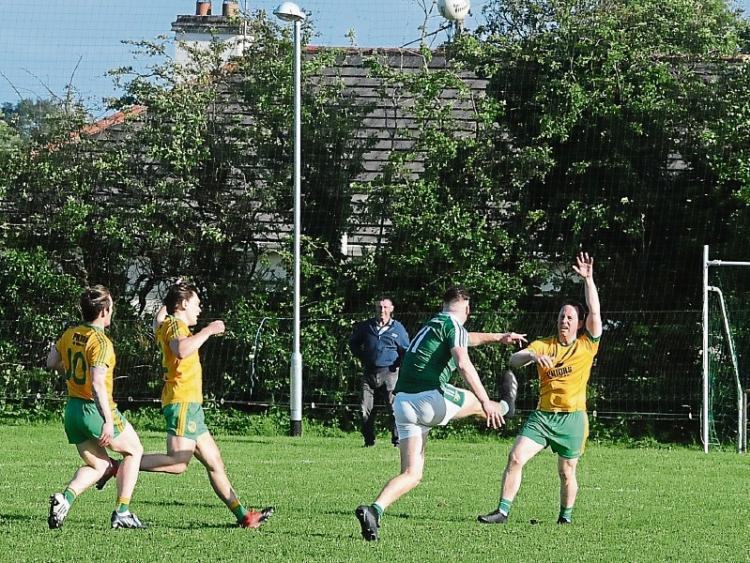 Mohill's Keith Beirne scores a spectacular point despite the efforts of the Ballinamore defence to stop him Picture: Willie Donnellan

If this is the sort of match that a global pandemic results in, well then maybe the lockdown wasn't so bad after all as Ballinamore Sean O'Heslin's just edged past Mohill in a classic Connacht Gold Senior Championship clash last Saturday.

Travelling to Philly McGuinness Park, you didn't know what to expect with the long layoff from action but from the very first whistle, the action was non-stop, the quality top-notch and the exchanges just as physical and as hard hitting as you'd expect.

It'd be easy to fall back on the cliche that a draw would have been a fair result, and maybe it would have been, but you have got to admire the manner Ballinamore chased down Mohill and surged at just the right time.

Mohill will have regrets after this one - a blistering seven points in the first 11 minutes and Keith Beirne giving an exhibition, they had Ballinamore all at sea. But a tendency to give away fouls cost them dearly as the deadly accurate Wayne McKeon and Luke Murphy reeled them in.

An injury to Keith Beirne hampered Mohill but when the game was there to be won, it was Ballinamore's hunger, typified by Dean McGovern, Shane Moran and Oisin McCaffrey, that carried the day.

Luke Murphy opened the scoring after just 40 seconds but the tone of the game was set when Domhnaill Flynn burst forward for a lovely point a minute later. Keith Beirne began an individual exhibition when a move that started with Padraig Tighe ended with a lovely off-load and a brilliant point.

Beirne added two more, one a free, the other from a mark before Murphy stalled the scoring with a free on six minutes. Another Beirne free was followed by a long range Flynn score before Beirne played a one two to score a wonder point on 11 minutes.

That put a rampant Mohill 0-7 to 0-2 ahead but a McKeon free steadied the visitors and Ballinamore reeled off three unanswered points, one each from Murphy (free), Tom Prior and McKeon (free).

Keith Beirne responded with a great solo effort but Murphy and McKeon added points to leave the scores level at the break. The half did feature one goal chance at either end - Shane Moran saw a fisted effort cleared off the line while Darren Maxwell made a great save from Jordan Reynolds.

Mohill surged again in the second half with points from Flynn and Keith Keegan, two great points, but Ballinamore came back with points from Moran and Murphy (2) to go in front on six minutes.

Domhnaill Flynn was yellow carded for a late hit off the ball but it was Mohill who surged again, Keith Keegan hitting another wonder score before Eanna Madden surged through to point on 15 minutes.

Wayne McKeon levelled again on 50 minutes from a free but Shane Quinn burst through the centre to edge Mohill back in front. Mohill, however, were dealt a blow when Alan Armstrong was yellow carded for taking down Dean McGovern, McKeon pointing the free.

McGovern intercepted a Mohill attack in his own half, charged forward before hitting a brilliant point to take the lead. Mohill came back with a Keith Beirne free but Ballinamore were flying.

McKeon (free) and the lively Tom Prior fired over points in added time and despite a brave effort from Mohill, all they could manage was a late Keith Beirne free that cut the gap back to a point at the final whistle.