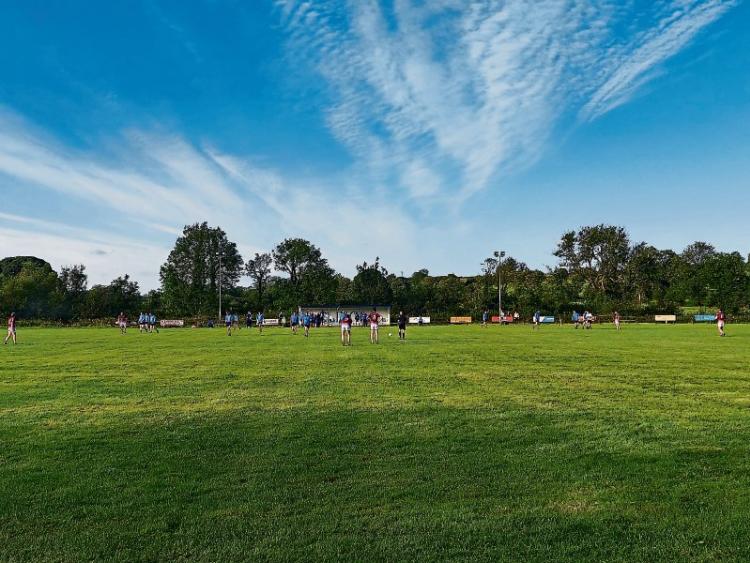 Level at halftime, a powerful second half performance from Drumkeerin saw them overwhelm hosts Eslin last Saturday in the first round of the Smith Monumentals Intermediate Championship.

The strong breeze down the centre of the field was a major factor in this game and both teams played better with it. But after playing with it in the first half, Eslin only went in level with the visitors while Drumkeerin really took off in the second half.

Eslin’s direct style of football suited Conor and Mossy Beirne were well suited to Eslin’s direct football style, making them very difficult to Drumkeerin full-back line but the north Leitrim men managed to prevent the duo from getting the goals Eslin needed.

Drumkeerin took a while to settle with Cathal McCauley and Jamie Langan keeping them close but James Gallagher from Corry appeared to be his team’s talisman as he was involved with the first four points of the second half, scoring three and winning one.

Eslin’s day got worse when midfielder Shane Beirne was injured in a collision in the second half and broke his hand.

Among those who impressed were James Gallagher (Corry), Feilim McHugh, Cathal McCauley & Declan Daly for Drumkeerin and Conor & Tomas Beirne for Eslin.

Conor Beirne opened the scoring from distance on four minutes with Jamie Stenson adding a point quickly after. Tomas Beirne set up Barry McLoughlin for a good point as Eslin were flying.

Cathal McCauley opened Drumkeerin’s account from a free on 13 minutes with Conor Beirne, set up by his brother Tomas, replying instantly. Jamie Langan then hit back by pointing a free.

Another Langan free narrowed the gap before a long delivery from Barry Bohan escaped the grasp of everyone and bounced over the bar. Drumkeerin came back with frees from McCauley and Langan approaching halftime.

There was still time for one more apiece from both teams - Tomas Beirne from distance and Cathal McCauley from a free meant it went in level at the break, 0-6 apiece.

Drumkeerin would have the wind in the second half and they went in front for the first time when James Gallagher (Corry) won a ball off a breaking Langan 45.

The Corry Gallagher was involved in the next four scores, hitting three from play and winning a free for Langan. Drumkeerin took complete control Felim McHugh buried a powerful shot in the Eslin net.

Eslin’s first point came 13 minutes in when Tomas Beirne was fouled, Conor converting and Tomas got in the scoring act, pouncing on a poor kickout to cut the gap back to five points.

Drumkeerin hit back with two from McCauley and although Conor Beirne pulled back a point, there was no way back for Eslin with Felim McHugh scoring a nice effort after good work from Tommy Rogan.

Eslin’s scored a long range free off the ground but Drumkeerin continued to pull away with points from McHugh, McCauley and Aidan Dolan to complete a good victory for Drumkeerin.