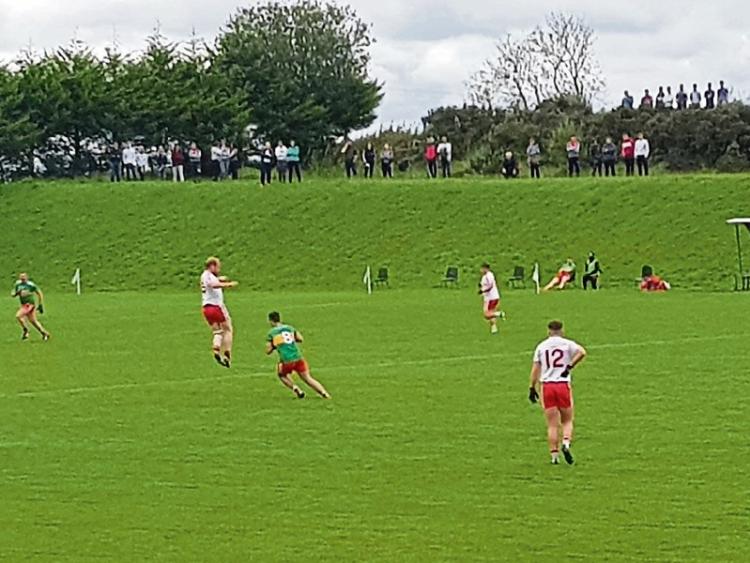 This was the winners best performance of the Championship so far, hitting 2-20 with 2-13 coming from play with seven players getting on the scoreboard. They were fastest out of the blocks and had four points on the board in as many minutes, Cian Clinton opening the scoring with a pointed free followed by three from play via Martin Feeney, Gary Fowley and Michael Clancy.

Ballinaglera needed a score and it came from the boot of Seamie McMorrow, a free, to be followed minutes later with a similar score from the same player to leave just two between the teams.

But just when the losers seemed to be back in the game, disaster struck for them. Michael Clancy received the ball about 30 metres from goal and got past three defenders before unleashing a powerful shot to the top corner, Conor O’Brien with no chance.

The second quarter was dominated by the winners, outscoring the opposition by six points to one, their scores coming from Martin Feeney with three frees, Cian Clinton, a free and one each from play courtesy of Gary Fowley and Jamie Conlon.

Ten points the difference at the break and a mountain to climb for Ballinaglera in the second half. And although they conceded the first score, a James Clancy point from play, to leave eleven points between the teams, the losers had their best spell in the game and dominated proceedings in the opening ten minutes.

McMorrow hit a point from play, Padraig Clarke got in for a well taken goal following good work and quick thinking from half time substitute Wayne Reynolds, who was fouled initially but spotted the unmarked Clarke to set up the goal.

The introduction of Reynolds, who didn’t start due to injury, coincided with his teams best spell, hit the next point himself and suddenly the deficit was reduced to six points.

But as in the first half, just when the losers seemed to be back in the game, Dromahair struck with a brilliant Jamie Conlon point, and when Martin Feeney, Conlon again and Michael Clancy added points, it was the winners back in the driving seat.

Ballinaglera kept battling with Reynolds and Enda Maguire hitting points from play but Dromahair hit back with similar scores from Clinton (2) and Martin Feeney to establish an 11 point lead.

It got worse for the losers, when with seven minutes remaining, Declan Fowley hammered home his team's second goal and in the aftermath of the goal, Ballinaglera were reduced to 13 players with Ciaran Cornyn and Brendan McGourty both sent to the line by referee Enda Egan, Cornyn on a straight red with McGourty receiving a second yellow.

Two further points from Feeney and Clinton ended the scoring for the winners with Seamie McMorrow hitting the final score of the game, a point, his fifth of the game.