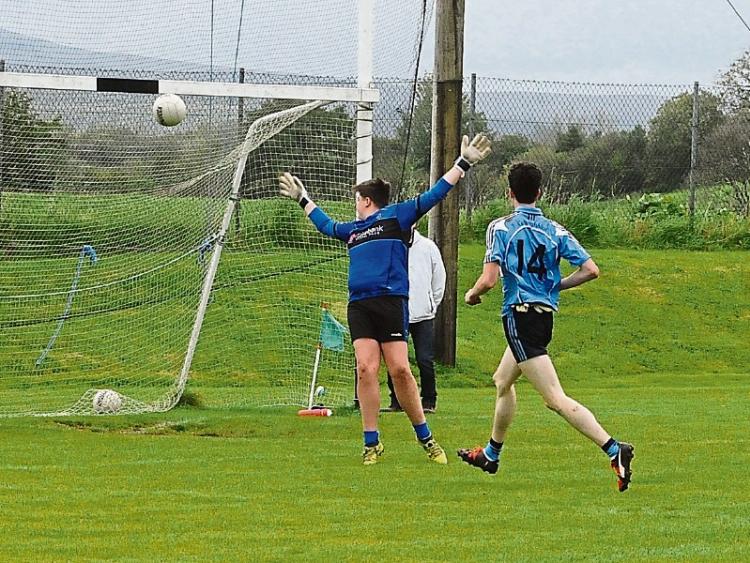 If hunger is a necessary ingredient for victory, then Allen Gaels can only be described as ravenous as their sheer desire fuelled this fully deserved victory over St Mary's Kiltoghert in the Newtowngore Engineering U17 Division 1 final.

The Carrick men started as favourites to complete a three-in-a-row of U17 titles thanks to two victories over the same opposition in the group stages but they were never able to counter the hunger of what was a driven Allen Gaels who fought for every ball as if their lives depended on it.

St Mary's sheer ability threatened on more than a few occasions to spoil the party, a three goal haul from the superb Jack Casey in particular very devastating, but they just couldn't match the workrate and desire the Drumshanbo outfit showed.

Ciaran McMorrow opened the scoring with a free after just 40 seconds while St Mary's Gavin Reynolds caught a free from Radek Oberwan under his own crossbar. Kyle McCrann equalised but two McMorrow points, the first a soft enough free, edged the Gaels in front.

St Mary's still posed a threat with keeper Rory O'Donnell alert to cut out a pass that would surely have led to a goal before Jamie McGrail fired over.

The impressive Mark Reynolds charged up the stand win in Pairc Sheain Ui Eslin before crossing the ball for Ciaran McMorrow to plant the ball in the net.

Andrew McKenna saw a shot saved by the keeper as St Mary's were creating chances but not converting, a fact emphasised with an Eoin Guckian point after good work from Liam McGourty.

But quickly as a flash, St Mary's were back in the game with a gem of a goal from Jack Casey, set up by Ben Guckian.

Gavin Reynolds and Casey (free) swept over points to cut the gap to a point but two McMorrow frees left Allen Gaels with a 1-7 to 1-4 halftime lead. That lead was wiped out in the first minute when a high Ben Guckian ball into the goalmouth saw a foul on Mark Lowe, Jack Casey converting the spot kick.

Incredibly, there was another penalty three minutes later when Eoin Guckian was taken down by Jonjo Devine after good work from Liam McGourty. But there was despair for Allen Gaels when Radek Oberwan drove his penalty wide of the St Mary's posts.

Jack Casey almost made them pay but Rory O'Donnell made a superb full-length diving save to prevent a goal but Mark Lowe did put over a point to edge the Carrick side in front after 36 minutes.

A poor shot from Gavin Reynolds was a let off for the Gaels and they took advantage when a ruck in the Mary's area eventually saw the ball come out to Liam McGourty, nominally a full-back, who planted a peach of a shot right where Carrick keeper Niall Keaney could never hope to get it.

St Mary's use of Gavin Reynolds to take kickouts was already causing them problems and a poor kickout was swiftly returned by Mark Reynolds to an unmarked Eoin Guckian who chipped the helpless Keaney for a killer third Allen Gaels goal.

But that was as close as it got with Allen Gaels dominating play for the rest of the game, hitting some bad wides before Radek Oberwan made sure of the win with a fine point while O'Donnell made a fantastic save to deny Ben Guckian a goal.