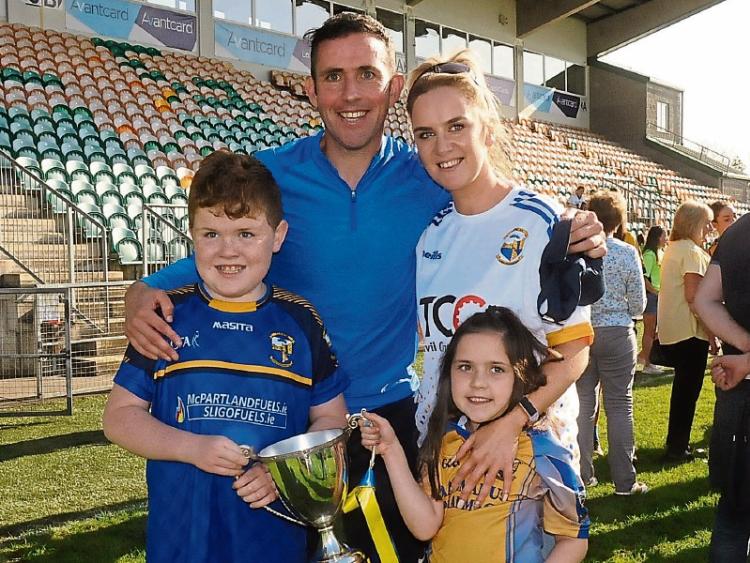 Glencar/Manorhamilton may have won their first Gotham Dry Wall New York Ladies Senior Championship title on September 20, but manager Padraic Corrigan was soon predicting a dynasty for the new champions in the coming years.

A superlative Glencar/Manor stormed to a 5-19 to 1-9 victory over Ballinamore Sean O’Heslins last Sunday in Avantcard Pairc Sean Mac Diarmada but a delighted Padraic was quick to set his team’s sights on even more success.

His first words, however, were to thank all those who worked so hard to develop Ladies football in Manorhamilton: “I’m so happy, I can’t believe it, it has been a while coming,” Padraic told the Observer, “Myself and the three lads are only custodians of the great work that has been done for years and years before. I can’t mention anyone because I could forget them all.”

The manager believes that Sunday’s victory is only a stepping stone for the new champions: “It is amazing to win today but we have a lot of talent but there is more talent coming. That is why I say today was so important, we couldn’t take a third defeat. This is going to change things because the conveyor belt is going and going.

“There is work being done from U9s all the way through and we’re winning so it is how to manage that. It mightn’t be me that is managing it but this club is only going to get stronger and stronger because of what happened today.

Tactically, Padraic and his team of James Glancy, John & Ciaran Sheridan, aimed to put Ballinamore on the backfoot from the word go: “Ballinamore, of course, were going to have a wee bit of a purple patch in the second quarter but after that, we just kept going and going, it was relentless.

“That is what we were guarding against, we didn’t want them to get ahead and build up a head of steam so we went on the front foot. It took them a few minutes to bring the sweeper back and that is what we planned to do, to hit them early and let them have to come out then.”

Glencar/Manor now face a Connacht Intermediate semi-final on Sunday October 4. and Padraic was already setting his sights on Connacht: “I have no problem bringing them out running on Tuesday or Wednesday, it’s them that might struggle. I’ve got the whistle, it is easy for me but you know what, if I asked the girls to do it, they would do it - that’s how driven they are, they are amazing.”