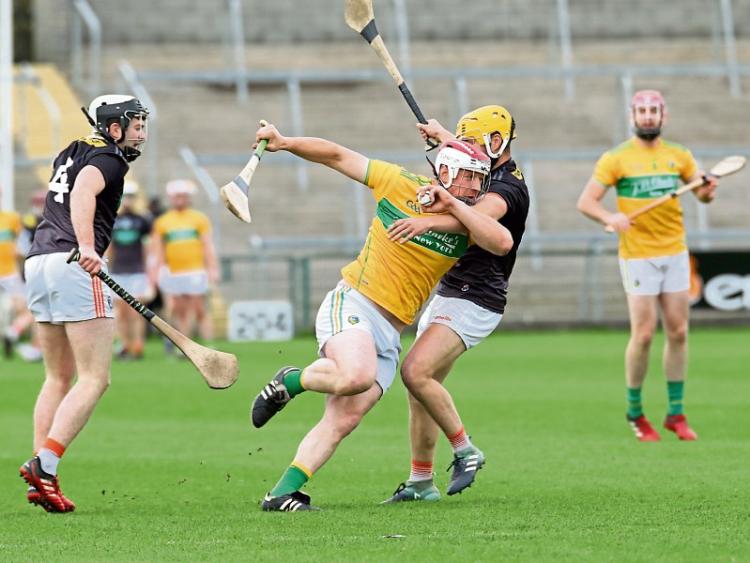 Leitrim’s Nicky Rackard Cup debut game against Armagh in the Athletic Grounds on Saturday proved to be something of a baptism of fire for Olcan Conway’s men after the home side fairly easily claimed a double score’s margin of victory.

Armagh torpedoed Leitrim’s dream of causing a possible upset in the closing twelve minutes of the first half action when Orchard County men dominated play all over the field and whipped over an unanswered seven points.

It was an even Stephen start with Armagh getting on the scoreboard almost from the throw in with midfielder Stephen Renaghan firing over but Leitrim equalised before the first minute had elapsed when Conor Beirne fired over.

However, over the next ten minutes Armagh, aided by a strong breeze, took complete control in the proceedings when racing into an 0 – 4 lead. In this spell Marty Moan hit over two Armagh points while Nathan Curry (free) and Paddy McBride added a point each.

Following one of Leitrim’s very few forays into Armagh territory a 14th minute free was won which Gavin O’Hagan converted to reduce the Orchard County’s advantage to 0 – 3.

Armagh replied with a point by Marty Moan, which restored their 0 – 4 lead prior to the water break.

After the resumption Nathan Curry tapped over a Armagh free which was answered by a 25th minute Gavin O’Hagan point from play. Over the next three minutes Armagh’s Nathan Curry (free) and Leitrim’s Conor Beirne exchanged points.

The Leitrim challenge was crushed in the remaining minutes of the half when Armagh hit over seven unanswered points.

Leitrim’s Jamie Ward received a yellow card during this period. Before the interval Leitrim’s Gavin O’Hagan tapped over a free, which still left his side trailing by 0 – 5 to 0 – 15 at halftime.

After the restart Armagh’s Nathan Curry was yellow carded and Leitrim, now aided by the breeze, began to exert more pressure.

Gavin O’Hagan opened the second half scoring when converting a free for the Leitrim men.

But Conor Corvan answered with a 39th minute Armagh point which got the scoreboard ticking over again in the second half for the Orchard County side. Leitrim continued to exert pressure with Gavin O’Hagan tapping over another free while shortly afterwards Jamie Ward put a Leitrim goal chance narrowly wide.

Leitrim reduced the Armagh lead to 0 – 7 by the 47th minute after Conor Beirne and Gavin O’Hagan (free) pointed. But Leitrim’s second half fightback suffered a serious set back when somewhat against the run of play, Armagh sub Shaun Toal finished off a well- orchestrated 48th minute move to the net.

Before the second water break Eoin McGuinness and Devlin added a point apiece to put Armagh ahead by 1 – 18 to 0 – 9 at the game’s three-quarter way stage. Leitrim’s Liam Moreton received a 57th minute yellow card.

Shortly afterwards a Conor Beirne goal bound effort came back off the Armagh upright and was cleared to safety. Leitrim continued to exert more pressure on the Armagh posts and Gavin O’Hagan put over a 61st minute free.

But Leitrim was reduced to fourteen players two minutes later after Liam Moreton was shown a second yellow card. Shortly afterwards Gavin O’Hagan shot over from play for Leitrim.

Armagh finished strongly in the closing minutes of the action when adding three points without reply after Danny Magee, Marty Moan and Nathan Curry (free) scored. Before the end Leitrim’s Enda Moreton fired over from play.