Leitrim will not want for heart promises Hyland 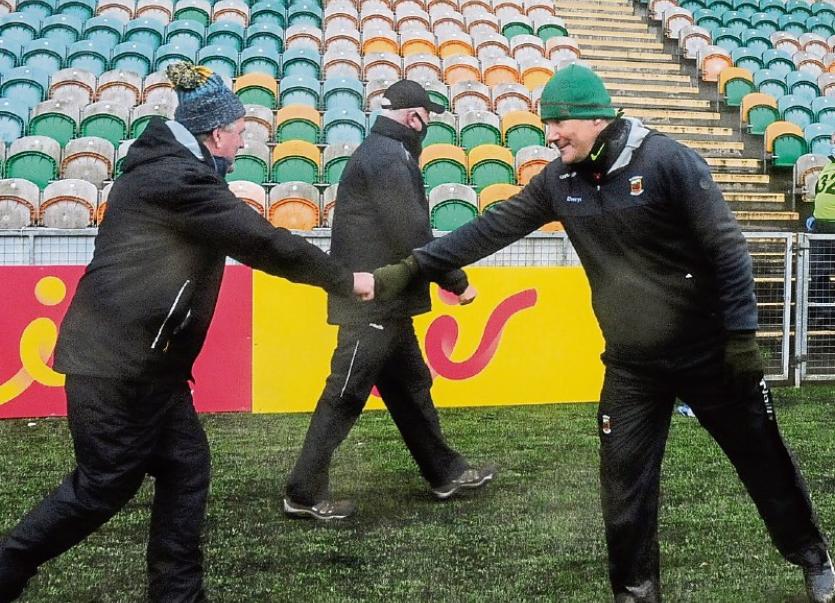 Terry Hyland certainly sees a positive future for Leitrim football if his remarks after last Sunday’s loss to Mayo in the Connacht Senior Championship is anything to go by.

Speaking to a gaggle of reporters after the 2-15 to 0-10 loss in Avantcard Pairc Sean Mac Diarmada, Terry approach to life and gaelic football was summed by his response to the final query of the interrogation - going forward, is there something to build on there for Leitrim?

“I’ll ask you to answer that question, you are after looking at the match,” replied the Leitrim manager, “It is easy for me to say things, I’d prefer somebody to give their opinion on what they’ve seen rather than asking my opinion because, at the end of the day, I’m always going to give a positive opinion.”

Even Terry laughed at the response “Well you can’t be accused of being negative anyway” but his point was made - Leitrim are a work in progress but his pride in their performance against Mayo was plain to see.

“We showed a lot of heart unfortunately again the simple errors cost us,” was Terry’s analysis of the game, “these are the things they have to work and that is probably the difference - the speed of the game at the top end of it and where we are at and they just have to keep working at it and at it.

“As you can see there is plenty of talent, plenty of heart, plenty of very honest players in Leitrim. I’ve seen that from when I came in here and it is just a matter that they have to work on their skills, hone them up a bit - they’ll not want for heart.”

Errors crept into a game after a fantastic opening for the Green & Gold as Terry highlighted the quality of the opposition Leitrim were facing: “That is what happens when you get a little more tired, the decision making goes out a little bit. We would have worked on that but playing against the likes of Mayo, you can’t give the ball away, you just can’t because they will murder you on the counter.

“That was the whole thing, to be patient, to work the scores, to get people into the right positions. It is how we expand that out. We did it for ten minutes at the start, and again after halftime but we need to expand that out for 70 minutes, 75 minutes.

“Mayo, it is All-Irelands they are thinking about rather than coming here and getting over Leitrim on a wet day in the Connacht Championship. But the only thing is that we kept them honest for the 70 minutes, they’ll go home happy too that they got a game that they maybe had to change gear in a bit too. They are a good team but what I will say about the Leitrim lads is that they are good too.”

His pride in the Leitrim players was evident: “Sometimes people forget, they look at scorelines and most people who look at scorelines say ‘Ah yeah, Mayo won by ten or 11 points, that was expected ‘but they weren’t here to witness it, they weren’t here to witness the bravery of the lads who played. Unfortunately we didn’t translate our performance to the scoreboard as much as Mayo did but for long stretches, we were in the game.”

Looking ahead, Terry stressed that the Leitrim County Board have some big decisions to make: “The biggest problem for Leitrim is next year. They’re talking about regional leagues and there is no certainty going forward as to where counties are going to play or what they are going to do. Maybe that is something that needs to be sorted out from a structural point of view.

“Leitrim maybe need to look at their championship and make it a bit more competitive and I think that maybe we could have done with another couple of more weeks with the lads before the National League. We only got the County Champions back literally two weeks before the start of the League and these are things they have to look at going forward.

“To be fair, I am not criticising, it is just the structures that are there and that is the way it is. But they probably need to see the bigger picture and give everybody a little more time. I was in total agreement that club football should go ahead of county football because it means that everybody is getting football but we probably needed to look a little bit more in Leitrim on how we work the gap in it and where we can do the best for everybody.”

Looking back on the year as a whole, the Leitrim manager found it very difficult, both from a football and business point of view: “I suppose from a footballing point of view, it has been a disjointed year. People like structures and you like to know where you are going and what you’re doing.

“From a personal point of view, this has been one of the busiest years I’ve had in my own business. It is a case that nobody has any down time, I know myself personally, I've had two days off since last November, let it be work or football. We have to bring life balance into that as well and unfortunately, the future is not predictable.”