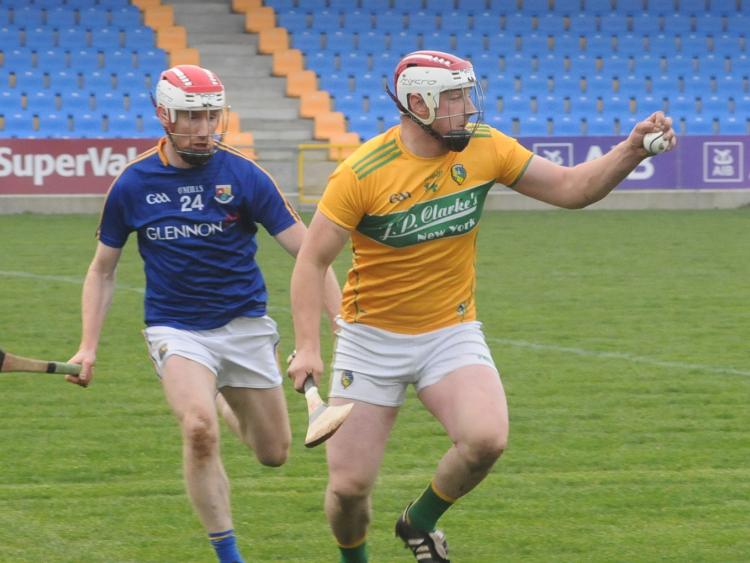 Leitrim hurlers created another slice of history in a history making era when they qualified for the semi-finals of the Nicky Rackard Cup for the first time after they came from behind to shock favourites Longford in Glennon Brothers Pearse Park on Saturday afternoon.

This was a game with a huge prize for the winner - not only do they book a place in the semi-finals against Mayo next weekend but they avoided a quick return back to the Lory Meagher with Longford and Monaghan both making the drop down for 2021.

Crucially, Longford were unable to pull away by more than two points and when the second half water break concluded, Leitrim came out a different team, obviously inspired by whatever Olcan Conway and his management team imparted to them.

From there to the finish, Leitrim grew in confidence with three huge points from Gavin O'Hagan, full-back David McGovern and midfielder Enda Moreton to regain and the lead. Longford came back once again to tie the scores with two late frees from Manorhamilton freetaker O'Hagan ensured a famous victory for Leitrim.

Leitrim now face a difficult task against Mayo who defeated Monaghan easily in their last outing but the Green & Gold Hurlers have again created another piece of history.

Leitrim got off to a blistering start with Enda Moreton firing over a fine point on the run in the first minute. With Longford hitting a wide, Gavin O'Hagan dropped a 65 yard free over the Longford crossbar on three minutes and two minutes later, Martin Feeney's strong run and pass from defence found Conor Beirne who got the ball back to O'Hagan for a great score.

Longford were rattled by Leitrim's bright start but both sides traded wides over the next ten minutes while Michael O'Brien made a good catch from a long range Joe O'Brien shot for Longford. Longford did open their account with a Cian Kavanagh point on 15 minutes from distance but an O'Hagan free after the water break restored the gap.

However, the home team were looking more dangerous but after two bad wides, they could only watch as Ben Murray judged a breaking ball in the middle of the park beautifully, plucking it from the air on the air and stroking the sliothar over the bar from about 65 yards.

Joe O'Brien swapped points with Colm Moreton, the Leitrim Gaels man score set up by good work from his brother Enda and Martin Feeney but Longford were finally finding their range and points from Alan Ward and O'Brien cut into the Leitrim lead. Aaron McDermott made a great block on Daniel Connell but another Ward free left Leitrim leading by the minimum at the break, 0-6 to 0-5.

However, that lead was exploded barely 15 seconds after the restart - a long ball in was gathered brilliantly by Conor Beirne who then turned his man, cut back and fired past a bewildered Longford keeper Eanna Daly. Longfod sub Shane O'Brien was yellow carded for a wild pull on Karl McDermott.

However, points from Maitiu O'Donohue, Shane O'Brien, Alan Ward (free) and Iomar Creaven had the teams level some nine minutes into the second half and Longford very definitely looked the team with momentum and energy.

Joe O'Brien fired over a wonderful point from a tight angle near the endline to put Longford in front for the very first time on eight minutes but then Longford got the yips that Leitrim were experiencing. They didn't push on although when Cian Kavanagh scored a truly brilliant effort from out near the right sideline, it looked as if they would cruise home.

The water break came at a good time - Leitrim reorganised and repositioned a few players and started to lock down the Longford attack. Kavanagh was yellow carded for a neck high challenge on Paul Lenehan that could have easily been a red card.

Twenty-two minutes into the half, Leitrim got their first point of the half when Conor Beirne's low struck free fell short but was won back and Gavin O'Hagan tapped it over the bar. Barely a minute later, a ruck broke out in the middle of the park and after seemingly no progress, Man of the Match David McGovern broke from the crowd, soloed and fired a brilliant point after the bar to tie the scores.

Leitrim were really on a run and after McGovern made a huge intercept in defence, his pass found Enda Moreton unmarked in the middle of the park and the Leitrim Gaels man fired over from massive distance to take the lead. Longford hit back immediately with a free from Alan Ward as the game remained in the balance.

But it was Leitrim who found the extra reserves of spirit and will to push on for victory. A foul on the excellent Ben Murray allowed Gavin O'Hagan tap over a free with less than seven minutes to go. Colm Moreton was inches wide with a good effort from play seconds later.

With over three minutes of normal time remaining, Gavin O'Hagan faced up to another free and despite a Longford voice helpfully shouting "Wide, his confidence is gone" before the sliothar was even raised, O'Hagan held his nerve and struck the ball over the bar from the halfway line.

Longford were now chasing hard and a few dangerous balls were cleared while they lost Daniel Connell to a second yellow card to ensure Leitrim's place in the semi-finals next week.