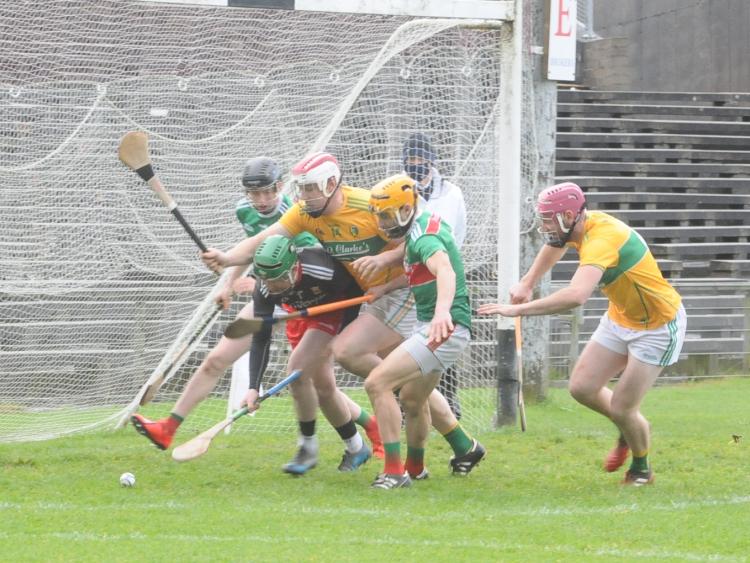 Conor Beirne battles for the ball seconds after the Mayo keeper had made a point blank save Picture: Willie Donnellan

Leitrim dreams of Nicky Rackard Cup glory were ruthlessly and clinical dismantled by Mayo in Elvery’s Mac Hale Park in Castlebar on Saturday in the second half of a semi-final that was fiercely contested up until a freak goal went against the Green & Gold.

Given the final scoreline, some would say you were dreaming if you said this game was finely balanced early in the second half but as Leitrim led by a point, their dreams of making it back to Croke Park ended in the space of a devastating minute.

After being tied 1-8 apiece at the end of an enthralling first half, young Cian Ffrench edged Leitrim back in front after great work from Conor Beirne. A minute later, Michael O’Brien’s long free fell within Ffrench’s reach but this time his goal bound shot was blocked by Mayo keeper Gerald Kelly.

Literally seconds later, the ball was in the hands of Cathal Freeman around the halfway line and with nothing in front of him, he launched an ambitious effort for a point. However, the sliothar was clearly falling short and as keeper O’Brien came to catch, it looked as if Leitrim would soon be on the attack again.

But disaster struck as the sliothar bounced from O’Brien’s outstretched hand and agonisingly rolled back across the line for a dramatic, lucky and devastating goal.

The goal literally changed the game as Mayo were suddenly infused with renewed belief and they rattled off an unanswered 1-4 before the water break to kill off the game. And with the game dead, the final quarter became a turkey shoot as Mayo kept scoring for fun.

It was tough on a battling Leitrim side who went toe to toe with a Mayo side who operate two Divisions higher than them in League hurling and gave as good as they got and actually rattled their vaunted opponents.

Freeman’s goal certainly catapulted Mayo in front but the home side did seem to get their scores that little bit easier throughout the contest and it was likely they would have pulled clear in the second half with some ease, even without the gift of the goal.

As disappointing as the result is, this was a season of some progress for Leitrim as they showed they could compete at this level. A deeper bench is needed but if Leitrim continue the progress they have made, they should be more than able to hold their own at this level.

Mayo opened brightly but shot a couple of wides as did Gavin O’Hagan from a long range snap shot. Enda Moreton saw a long range effort easily gathered by the Mayo keeper and the home side opened the scoring with a free from Shane Boland.

Mayo were threatening and it took a great block to deny Adrian Phillips a clean strike as he bore down on goal but they did extend their lead with a Brian Morely point after a crossfield pass.

Leitrim were struggling to score as Gavin O’Hagan hit a free wide but a careless Mayo hurl that clattered the helmet of Karl McDermott allowed O’Hagan to tap over the free on nine minutes. Two minutes later, Michael O’Brien was alert to cut out a dangerous Mayo attack and sent the ball long.

Gavin O’Hagan gathered the clearance which he promptly sent into the Mayo square where Colm Moreton managed to hold off defender and keeper to scramble the sliothar to the Mayo net.

Leitrim followed up with wides from Ben Murray and Colm Moreton before Eoin Delaney (free) and Ben Murray swapped points, Murray's wonderful score that came from a pinpoint O’Brien puckout after the Mayo score and Murray did the rest from 65 yards.

However, Mayo hit back with a goal when the long ball to Delaney led to a pass to Morely who spun and drove the sliothar to the net. Mayo were almost through again only for a timely O’Brien interception but just before the water break, a foul on Conor Beirne allowed O’Hagan to tap over the levelling free.

Mayo again surged clear with a Boland free and a Delaney score from play but after a protracted period of play where Colm Moreton and James McNabola were swapping roles due to a blood injury, Leitrim burst into life.

Karl McDermott scored a lovely point from distance and after Leitrim won the sliothar back from the next puckout, Conor Beirne made a great catch to turn and score, tying the scores again.

Leitrim then surged into the lead with two superb Karl McDermott points, the first as he held off his man, the second after Liam Moreton won a battle for possession in the middle of the park.

But again the Mayo double act of Boland and Delaney responded with three points, two from frees to leave them a point up as added time approached. However, a well taken Cian Ffrench point ensured Leitrim went into the halftime break level at 1-8 apiece.

Ffrench repeated the dose six minutes into the second half when Conor Beirne showed great persistence in shadowing a Mayo defender for 50 yards before dispossessing him, the sliothar finding Ffrench for the score.

The turning point came a minute later when a long O’Brien free broke in the Mayo goalmouth and Mayo keeper Gerald Kelly made a great save to deny Ffrench a crucial goal. Unfortunately for Leitrim a goal did arrive but it came seconds later at the opposite end of the pitch.

Cathal Freeman launched a speculative shot that should have been bread and butter for keeper Michael O’Brien but disaster struck as the ball spilled from his hand without an attacker in sight and dribbled painfully across the line.

The goal really knocked the stuffing from Leitrim with Sean Kenny immediately adding a point from near the sideline. Another Boland free three minutes later put four between the sides and Mayo quickly put the game beyond reach when Boland struck for 1-1 in the space of 60 seconds by the 15th minute.

That left Leitrim eight points between and the gap would only grow as Mayo finally found the form that made them red hot favourites for this clash. Kenny would add two from placed balls from distance as Leitrim were struggling to make any real headway in attack.

With Leitrim heads dropping and legs getting heavier, Mayo went on a scoring spree over the last 11 plus minutes of action as they would add nine points to just two from Leitrim. AdrIan Phillips, Boland (5), Morley, subs Brian Hunt, Liam Lavin and Cormac Phillips would all add points to swell the eventual winning margin. Leitrim did add two points, one from a Karl McDermott free and the second from sub Zak Moradi as Leitrim went in search of a consolation goal.

The nearest they came was deep in injury time when another sub, Sean O’Riordan, drew a fine save from the Mayo defence.