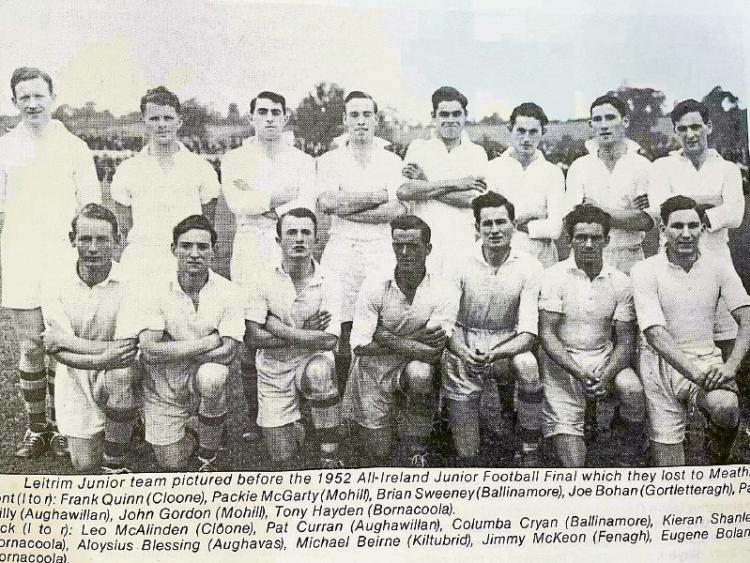 Following the death of the legendary Leitrim footballer Packie McGarty (RIP) last week, we have been inundated with photographs, stories and recollections from friends, team mates and supporters.

Packie was laid to rest last Thursday following his Funeral Mass in Terenure. At that Mass his son Eamonn spoke lovingly about his father and gave an insight into the man himself - a wonderful husband, father and grandfather, as well as a sporting icon.

Over the nine pages, friends of his reminisce about the great player he was and the immense pride and joy he instilled in Leitrim people in the 1950s and 60s and indeed, right up to the present day.

Packie played with Mohill, with Cloone and Fenagh, and also with Sean McDermotts and Round Towers in Dublin and the Tara club in London. He had a long and storied career which saw him line out for Leitrim, Connacht and Ireland.

His Leitrim career spanned from 1949 to 1973, ending at the age of 40 with defeat to Mayo in the Connacht SFC Semi-Final in Carrick-on-Shannon.

We also have a story about a particular time when Packie lined out with a 'Cavan' club. Fellow players, greats of the game themselves, held Packie in very high esteem and this can be seen by the comments made after he died.

Among those who paid tribute to the legendary Leitrim player was a legend in his own right, broadcaster Mícheál Ó Muircheartaigh who simply said of Packie in a tribute on local radio, “He’ll be spoken about for a long time yet.”

McGarty's impact on the Leitrim psyche is reflected in the RTE commentator's words: “Normally what we call the wee counties are not known that well but Packie McGarty was an exception. From the first time he played with Connacht in a Railway Cup, he was noted by everybody, the great displays he gave and whenever he lined out for Connacht, he was as good as any man on the team.

“I used to do the Railway Cups always on St Patrick’s Day and it was great to see players from what were called weaker counties but Packie was different. They looked upon him all over the country as the equal of anybody - he proved that many a time.

“He played football as he thought it should be played - he wasn’t a mighty big man but he wasn’t small either with a great heart and wonderful skill. He was spoken about after the Railway Cups. He won two (as a player), he played in another few finals, didn’t do it but he was there all the time. He was actually the first Leitrim man to be picked on the Connacht team - that was a great honour in itself. He was the first to win, not a Connacht medal, but a Railway Cup medal so he was liked everywhere.”

“He liked to play but he didn’t seek great publicity or anything like that. What he wanted to do was to play football, to enjoy football and to play against the better teams and he did that.

“To this day, you don’t have to go to Connacht to mention the name of Packie McGarty, he was the great Leitrim man who used to be in Croke Park.

“In a way, he was a player like Christy Ring who drew crowds there, he was a Leitrim man - people didn’t expect good footballers from Leitrim, he was there, he was there for a long time, he never let them down, enjoyed his game and loved meeting former players in later years, that was the type he was.

A quiet man that didn't want any fuss, even when it came to how his name was spelt. The name McGarty in Leitrim can only be one man but when it came to his first name, there was plenty of variations. When John Connolly interviewed him back in January 2016, the great man himself told us he spelt his name “Pakie” which was used in all our stories on our website over the past week. However, for this article and those on the following pages, we've gone with the spelling “Packie” which was used on his death notice on RIP.ie.

As the saying goes, there will never be his like again. May Packie Rest In Peace.