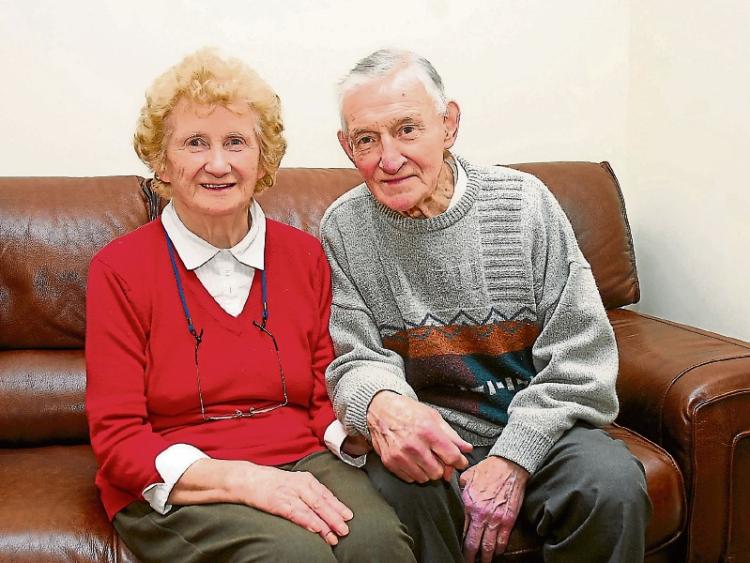 Packie's son Eamonn spoke beautifully and lovingly about his late father prior to his Funeral Mass in St Pius X Church, Templeogue last Thursday. The celebrant was Fr Gerry Moore.

Packie was born to Dan and Bridget McGarty and was a brother to the late Dan, Willie, Eddie and Kathleen.

“Like so many families back then he had to leave familiar surroundings to look for work. Whilst in Dublin in 1957 his life changed. Meeting Ella was the most special moment of his life. That was when a remarkable love story began. Mum and Dad fell in love and began a journey that would last a lifetime until it became paused,” Eamonn said.

“Dad often commented that the greatest thing he did in life was meet Mum, they were a perfect fit, both were warm, affectionate, engaging and had outstanding values, they wanted the same things, a life together, a family and both had a strong faith and ideals on how to raise the family.

“Dad had great skills as a people person, it's very obvious by the wonderful tributes paid to him since his passing, the way he treated people influenced every facet of his life. Our childhood memories were of wonderfully loving and hard working parents, they would do anything for their children.

“Going into Packie's shop in Clondalkin was an experience, because he ran it. You rarely got out quickly you could easily be hit by a football. Sport, politics, the weather, anything was on the agenda.

“The customer was a lot more than a customer, they were a person. Dad and Mum worked every day of the year in the shop bar Christmas Day, they did it for their family.

“Every Sunday they would take us out to the Dublin Mountains, Howth or a park. Summer holidays were spent in Ireland and often in Clonakilty.

“Everywhere Dad went his personality was infectious, people wanted to talk to him and he loved talking to them.

“Dad's faith was central to his life and their attitude to life reflected it. Mum and Dad lived their faith. Each night they prayed the family rosary.

“When he retired form the shop he directed his attention to the care and devotion of his grandchildren, he was a constant presence in their lives and loved spending time with them.

“Retirement meant time to visit new places. He visited the home of the saint he adored, Padre Pio, Lourdes, the Shrines of France and the Holy Land. There were also regular trips around Ireland with our aunts and uncles.

“It was also an opportunity to join Ella everyday from then on for daily Mass.

“They were married in Finchley Road in London in 1959, they had seven children, two in London and the remainder in Ireland.

“Last September Mum and Dad celebrated 61 years of marriage, their marriage was characterised by enduring love, positivity and investing their efforts in their children and grandchildren.

“When Dad was diagnosed with heart failure over eight years ago, due to the extensive damage the prognosis was about 18 months.

“Mum is the reason that we have had Dad for so long, the care and love that she gave him was unlimited, at times, frequently, it meant no salt, perhaps less milk in his porridge and definitely less butter on his boxty.

“In recent months as Dad's health deteriorated, Mum's work and that of my fellow siblings was completely focused on helping Dad as much as possible.

“Mum worked tirelessly. Packie didn't want to go into hospital and neither did his family want it. If Mum could not visit him it was never going to be an option. Packie died with Ella holding his hand like they've done for nearly 62 years. It was as God intended.

“A massive part of Dad's life was football. My Mum often says that when God gives us gifts we need to use them. Dad had a gift, he was a truly great footballer. The virtues that made him a great man also made him a great sportsman. He made friends all over Ireland from football.

“Dad's Leitrim career was extraordinary. It started in 1949 at the age of 16. It would span four decades until 1973 when at the age of 40 he retired. I'm sure he didn't want to but six kids might have had an impact at the point.

“Dad played in six Connacht Finals but they couldn't get past Galway. He won three Railway Cups for Connacht, represented Ireland, he was selected on the Leitrim and Connacht teams of the millennium.

“Dad loved the Leitrim jersey, he travelled from London and Dublin to wear it. This is epitomised in his greatest game, the 1958 Connacht Final. He gave his heart and soul to Leitrim that day. At the end his jersey was in tatters. He didn't just have the ability, he had the spirit.

“Growing up in our house the names of the Leitrim players of the 1950s and 1960s reverberated around our house. Dad talked about them all the time. He was embarrassed when he received individual awards because it was always a team game for him.

“He told me his one regret in football was not winning a Connacht title for the Leitrim supporters because they deserved one. Dad loved Leitrim people and Leitrim people loved Dad.

“A great friend of the McGarty family, Eamonn Duignan referred to Dad recently as a great man. I would add to that a great husband, a great father and a great grandad. Thanks Dad for everything you did for us in life.”

Packie was laid to rest in Newlands Cross Cemetery. May he Rest In Peace.