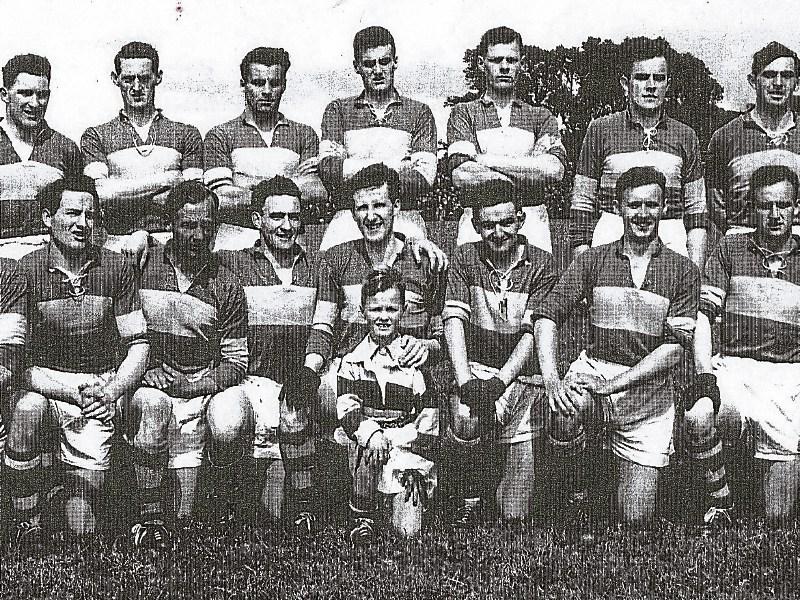 Packie McGarty (front row, third from left) pictured with his Leitrim teammates in 1958 - full team photo at bottom of article

There are many beautiful and heartfelt tributes paid to Pakie on the condolences section of RIP.ie. Here is a just a small selection.

Packie was one of the most outstanding footballers that I have played against, a true footballing legend. I played for Galway from 1955 to 1963 and we met Leitrim many times and the combination of McGarty and Cathal Flynn was to be feared. The game he played in the 1958 Connacht final still is a permanent memory to me when I think of the supply of ball he gave to the full forward line, especially Cathal Flynn. I know because I was marking Cathal. May Packie rest in peace.

A genius who always troubled Galway. Always admired him and glad I never encountered him on the field. Treasured, vivid memories of him running riot among our defence in Sligo and Galway.

I have memories of that great Leitrim man and footballing legend, having played against him in the sixties. He will be sadly missed by all who knew him. May his gentle soul rest in peace.

Packie was a legend of our time and a pleasure to meet and chat with. I found him very shy. My sympathy to Ellen and all the family. RI P great man.

On behalf of everyone in Roscommon GAA I wish to extend our deepest sympathy to the McGarty family and everyone in Leitrim GAA on the sad passing of the great man that was Packie McGarty. One of our greats in Roscommon Gerry O'Malley always spoke so highly of Packie and always regarded him as one of the greatest players he ever played against.

On behalf of Round Towers GAA Club, I wish to express our sincere condolences to Ellen and the entire McGarty family on the passing of Packie, a footballing legend, and a gentleman.

I had the pleasure and the privilege of playing football in the 60’s with Packie for our native Leitrim and Connacht and inter-club football in Dublin. In my view, he was, pound for pound, one of the very best players of his generation comparable to Sean O’Neill of Down or Benny Gaughran of Louth. He was also a special person and any time spent in his company was always a sheer joy. He will be sadly missed by all who were lucky enough to know him.

It is with great regret and sorrow that I have learned of the death of my friend and team mate Packie McGarty RIP. He was a native of Mohill, like myself from Gorvagh a part of the Mohill parish. He was a superb footballer with a great natural fielding ability, allied to a nonstop evasive solo run that ended with a goal or point for the team.

Just heartbroken to learn of the passing of my hero, my idol, my forever friend. Heartfelt sympathy to Ellen and all the family. All of Leitrim will be sharing in your grief but also in the pride we all feel to have had such a man to simply adore and to wonder at his footballing skills and his gentle unassuming ways. Packie lit up our lives so many times in the Mohill, Tara’s, Sean McDermotts, Connacht or Ireland Jerseys, but it was in the green and gold of Leitrim that his star shone brightest, just as it is now in the great playing field up above. Thank you Packie and the McGarty family. Suaimhneas siorai duit, Packie.

I wish to express my deepest sympathy to the extended McGarty family on the death of the great and humble man that was Packie McGarty. He was such an icon not just in Leitrim but I'm sure that my sentiments are shared by so many in Roscommon and all those in the GAA community here. I think also of the Leitrim diaspora especially in places like New York where he also starred on occasion. I was in St. Coman's Park, Roscommon for that epic game v Galway in 1958. I was lucky enough to meet him at a book launch by Seán Óg Ó Ceallacháin in late 2012. May he rest in peace.

On behalf of the Galway GAA community I wish to express our sincere sympathy to the McGarty family and the GAA community in Co Leitrim on the death of Packie. Accepted as one of the greatest footballers of all times, he was respected and admired by all in our county and his performances in the series of games against us in the period 1958-62 are recalled with admiration. A true sportsman and gentleman.

He was a legend of the game when I was a child. It was my great privilege to try to play on him in a Dublin County Championship game: Round Towers versus Erin's Hope. Wonderfully talented player.

Sincere sympathy to the McGarty family on the sad passing of Packie, a true legend of the game. May he rest in peace.

I had the pleasure of being his mascot for the famous Connacht Final of 1958 and it was an honour many years later to share a pitch, though on opposite sides, with my hero. Packie was an excellent example to us all, a warm, wonderful and humble man. Rest in peace.

A truly inspirational footballer, he was also a lovely man. I had the honour and privilege of being his teammate and of experiencing his great footballing prowess at close quarters. Just to be on the pitch with him was special. It was also such a great pleasure to have spent many hours with himself and Ella in their home in Terenure. His enthusiasm for the game was boundless and many battles were recounted with the greatest of relish - but always with great humility.

Packie will be mourned by the entire GAA world. It was such an honour to have known him. There will not be his like again.

Sincere condolences to all the McGarty family on their great loss of a true legend both on and off the football fields. Packie was one of the greatest I have ever seen and he should have been a walk on to both teams of the century in 1984. May he now rest in the peace of the lord.

A true gentleman and one of Leitrim's finest sportsmen.