Donegal have a hard road to glory this year 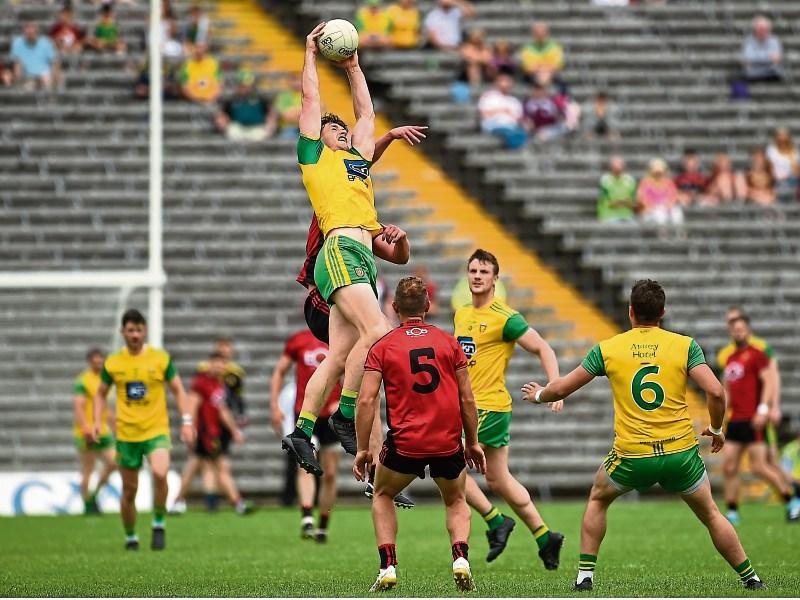 ABOVE: Hugh McFadden of Donegal in action against Peter Turley of Down TOP: Ryan McHugh of Donegal leading the players on to the pitchPhoto by Oliver McVeigh/Sportsfile

Donegal's 2021 GAA season could last six or 16 weeks. Five games or 10 games. The first five games are guaranteed. The first four will only determine league position for 2022, but after that it is championship, win or bust, losing means season is over.

There was a time when it was always like this. For the last couple of decades there was a back door. But then Covid arrived and we were treated to championship football as it was in the last century in 2021.

It all went well until a below par performance against Cavan in the Ulster final ended hopes of a three in-a-row. That was late in November last year with the provincial decider player so different from other years, played under lights in the Athletic Grounds, Armagh.

This year will see the same format, but the games will be played on a firm summer sod.

So what will constitute a good year for Donegal?

It is Declan Bonner's fourth year in charge - three Ulster finals and two wins would normally be regarded as quite successful, but Donegal ultimately came up short when it came to qualifying for All-Ireland semi-finals, be that through the Super 8s or last year losing out in the provincial final.

So for 2021, the target still has to remain getting to the last four. As there will be no Super 8s again this year, it means Donegal have to win Ulster.

To do so they have to have to do it the hard way, through the preliminary round - four tough games. But they have done it twice in the last 10 years and Cavan achieved it last year.

Much will depend on Declan Bonner being able to get an injury-free run. That will take a bit of luck. Whether it was a factor in Donegal losing to Cavan in last year's Ulster decider is hard to quantify. With a full deck, Donegal will be very close.

Before the championship begins Donegal will have plenty to keep them busy with at least four league games - three in Division One North against Tyrone, Monaghan and Armagh, followed by either a Division One semi-final or relegation play-off, depending on whether the finish in the top two or bottom two of the table.

It's not ideal having all Ulster opposition, especially as they are likely to meet some of those opponents a few weeks later should they advance in the championship. Finishing in the top two of the table would be ideal as retaining Division One status remains important.

The Donegal squad is along the same lines as last year but has been boosted by the return of three Gaoth Dobhair players - Odhrán Mac Niallais, Odhrán McFadden Ferry and Kieran Gillespie. It’s hard to believe that their leader Michael Murphy will be 32 this year and the ageless Neil McGee is still to the fore at full-back.

Getting back to Croke Park for All-Ireland semi-final or final day will be the driving motivation for those two. There will no room for slip ups. Last year’s Ulster final will be mentioned now and again but I doubt if there will be any underestimation of any team this time around.

It all gets under way for Donegal in the league on Saturday, May 15 against Tyrone in Healy Park, Omagh. It won't get any easier, but hopefully we will still be involved come Sunday, August 1 when the Ulster championship final is set for it's usual venue, St Tiernach's Park, Clones.

There are unlikely to be any spectators at the opening games but hopefully, come Ulster final day there will some fans back and a return to near normal.

A Donegal Ulster final win and return to Croke Park later in August would be something to look forward to.