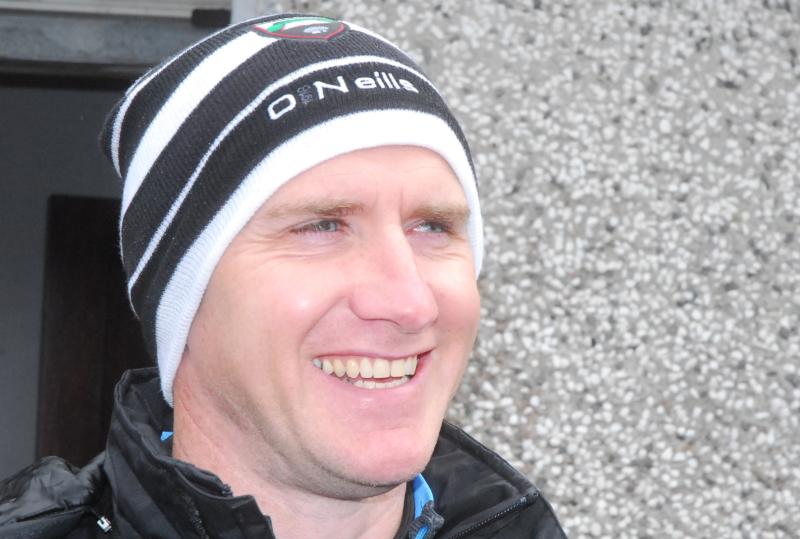 For the casual fan, you would think any Sligo manager would have been very happy with the second half display last Sunday that saw them outscore Leitrim 2-8 to 0-6 in the opening round of the Allianz NFL Division 4 North. But then Tony McEntee doesn’t come across as someone to trot out platitudes.

Surrounded by the media after the game, the Crossmaglen and Armagh legend didn’t resort to cliches but looked at that game from a different angle, with a fair bit of humour coming across in his remarks.

“The second half I wouldn’t be as happy with,” said McEntee, “We executed the goal chances much better but from a work rate and intensity, I think it dropped from the first half. That may be a factor of fatigue but probably also the fact that we had the extra man. Maybe we took it a wee bit easier so I wouldn’t be as happy as I was in the first half.”

McEntee agreed that the sending off of Aidan Flynn was a big advantage but he felt Sligo were on the path to victory: “Having an extra man in the second half was obviously going to be a game changer. I would say, however, that coming into halftime we were a point down and we had whatever breeze was available in the second half so we felt we were in a good position.

“I would have liked to think that had we been 15 against 15 in the second half, that we would have pushed on and won by a couple of points but clearly not by the margin there was at the end.”

Wasting possession and goal chances was a bugbear for McEntee: “We moved the ball well at times but I think, and I’m going to say maybe 25 times, we kicked the ball away or fist passed the ball to the opposition so while our counter-attacking play was good in parts, it was also our major downfall throughout the whole game.

“We had three goal chances in the first half but didn’t take them. We took the chances in the second half but I think it is a positive sign of a team that is creating goal chances - taking them is important but it means that we are getting into that position more often - I’ll take that for now.”

The Sligo manager felt that the long break from competitive action fuelled the open nature of the game and the importance of the result in terms of promotion: “In all honesty, I think it is a reflection of the first game back. I speak for my own team here, there was a lot of nerves there from the start.

“And as much as you prepare, and they did prepare well so that is just another game that they are playing, the reality is that this means a lot to them and getting out of Division 4 is something they want to do. Antrim had a tough win yesterday so I think next week is make or break for both ourselves and Antrim in regard to Division 4.”

Sligo’s forwards shone but McEntee expects more from some of his more talented players: “We have a good panel of forwards, I think our scoring rate was 60-65% from our scoring chances. To be honest, I was actually disappointed, I was expecting a bit more from them particularly Red Og.

“He showed his brilliance in parts and then other parts, you are sort of frustrated with him. Niall played really well for his first game back in whatever length of time he has been away, Cian Lally and Sean Carrabine did well too.

“They are very young actually, especially in the forwards and I think that is a good sign for the future of Sligo. We have good forwards, there is a lot we have to work on but to be fair, we have time to work on it.”

His wit came to the fore again when McEntee was asked about the importance of the game, quipping “Do you mean it takes the pressure off me?” before adding “It is a home game, you expect to win your home games. It is great to get the result in Markievicz Park, a good field and a good place to have as a fortress, particularly when you look forward to the championship when Mayo comes here. You want to have success and familiarity with it.”

SEE THIS WEEK'S LEITRIM OBSERVER FOR MORE REACTION AND ANALYSIS