Muireann in the goals on the double 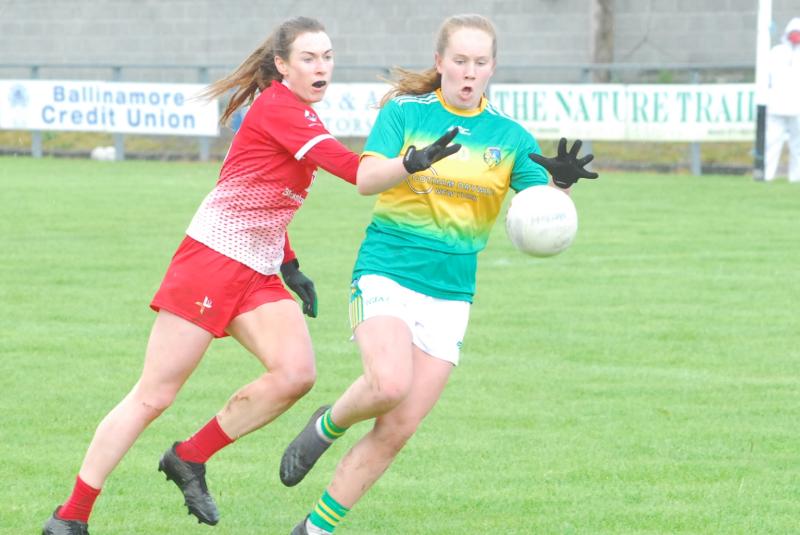 Playing at elite level in one sport is hard enough but to excell in two takes something special but Muireann Devaney certainly took it all in her stride as she scored the winner for Athlone Town on Saturday and then hit the net for Leitrim Ladies on Sunday.

The Glencar/Manorhamilton and former Manorhamilton Rangers star certainly had a busy weekend of it as she scored twice for Athlone Town against Galway in their first SSE Airtricity Women’s National League win of the season, including a last minute winner for the midlands club.

Then on Sunday, Muireann was introduced off the bench and scored 1-1 and made another as Leitrim scored an important 3-14 to 3-6 victory over Louth in the Lidl NFL Division 4 opener in Pairc Sheain Ui Eslin in Ballinamore.

Exhausting you might think but Muireann was just delighted to get the wins as she told the Observer: “It is a great win today and it is great to get two wins out of two for the weekend and that is what I was hoping for on Friday evening. So we will go into Monday now, prepare for the week ahead and hopefully another two good results next weekend.”

Is combining two demanding field games difficult for the young Manorhamilton woman? Not if you have good communication with your managers according to Muireann: “Ah no, you just have to make sure that your body is ready for each match and if it is not, you need to communicate with the manager and they are always understanding.

"A tough game yesterday, I recovered well last night and this morning, Hugh knew exactly how I was feeling so I was fit to give him a half an hour and I was delighted to do that.”

Looking back on Saturday’s victory over Galway, a first of the season for Athlone Town, Muireann was delighted that her teammates finally got some reward for their efforts: “The win was badly needed, we’re a lot of games in without a win. There have been draws there and a very heavy defeat to Peamount, we’ve been tipping away nicely but still hadn’t got the three points so I was delighted to get it yesterday.”

As for Louth, it was a matter of making up for last year: “We went to Louth last year and were very disappointed to lose by a point but we knew we had to redeem ourselves this year and I think we showed today what we have been working towards and great to get it.”

Whatever the season might bring in either code, Muireann is very much relishing the challenge ahead: “Definitely loving both of them now, we’re coming into Summer so there will be more rest time but more games as well. It is all about looking after yourself, eating the right things and doing the right things to recover so I’m absolutely looking forward to the Tuesday evenings ahead, kick on and get a few more wins.”