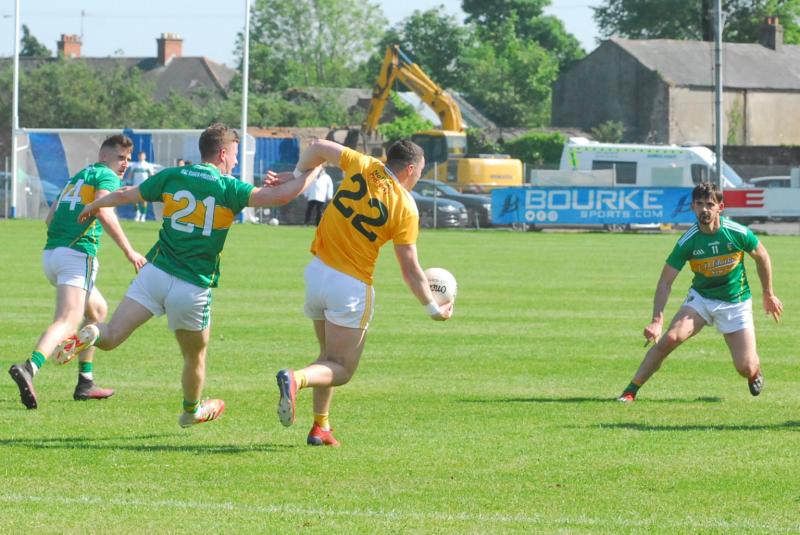 When they were good last Sunday in Corrigan Park, Leitrim were very, very good. Unfortunately, when they were bad, it was bad as Antrim pipped Terry Hyland’s men in the final Allianz NFL Division 4 North clash with an injury time point after a breathless encounter.

Initial Leitrim reaction centred on their anger over the decision of referee Kevin Faloon of Armagh to award the home side a free out when the Green & Gold felt the Antrim player had over-carried the ball but when the anger subsides, Leitrim players know it is to themselves that they must look for answers.

How else does one explain a brilliant opening 13 minutes to the game when Leitrim led 0-6 to 0-4, playing some quick accurate football and exposing the Antrim defence time and time again?

Or what about the way Antrim absolutely monstered the next 40 minutes as they turned a two point deficit into an 11 point lead?

Even more mystifyingly, how can you explain the transformation that came over Leitrim when Evan Sweeney literally dragged Leitrim kicking and screaming back into the game, scoring 1-3 from five shots at target in a blistering five minute spell?

To be honest, this match encapsulated Leitrim’ entire League campaign - periods of absolutely astounding and brilliant football that had this observer delighted as he sat on the grassy hill in Corrigan Park but equally, for long periods of time, you were left tearing what little hair I have left out with frustration.

Far too often Leitrim allowed Antrim too much time on the ball and didn’t pressurise them and in Odhran Eastwood, Ruairi McCann, Patrick McBride and Conor Murray, Antrim had the forwards to do real damage.

But in truth, the big damage was done in the middle of the field where Niall McKeever and Conor Stewart ran the show, McKeever in particular was imperious and it was no coincidence that when the former Aussie Rules star left the game 11 minutes into the second half, along with a couple of other injured key players, the course of the game changed.

The introduction of Sweeney made a big difference too, he was confident enough to take his chances and that confidence spread to his teammates. Switching Mark Plunkett and Niall McGovern to midfield worked in a big way too as Leitrim suddenly started to win the ball in the middle of the park.

And you’ve got to say that a controversial black card for Antrim’s impressive Marc Jordan helped - it left Leitrim a man to the good and they pushed Paddy Maguire up, adding to the urgency and ball winning ability in the middle of the field.

Leitrim could have won this game, they probably deserved a draw but Antrim, as they have done throughout this campaign, they kept their composure under huge pressure and again hit an injury time winner to go through the Division 4 North campaign unbeaten.

Keith Beirne opened the scoring with a free inside the first minute but a Ruairi McCann mark a minute later tied the scores. Beirne availed of the mark on three minutes, gathering a long ball from Donal Wrynn but Leitrim missed a chance to add to their score when Tom Prior, after making a clever mark, dropped his shot short.

Mark Plunkett did quickly add a point as Leitrim turned over the Antrim defence but from that kickout, a mark at midfield led to a long ball with Ryan Murray scoring a great point from 45 yards.

Plunkett and Murray swapped points again, Plunkett pouncing after a poor delivery into the Antrim corner broke kindly for the Aughawillan man. Murray thumped an absolute monster of a free high over the bar to leave a point in it after seven minutes.

A soft enough free for Leitrim got even better when it was moved in for dissent, Beirne tapping over but Leitrim made the same mistake when Paddy Maguire was penalised for fouling Odhran Eastwood, the ball moved in for dissent with the corner-forward firing over.

Antrim suffered a blow when the lively Ryan Murray was forced from the action on 11 minutes but the home side were beginning to demonstrate danger, Paddy Maguire making a vital interception from a pass across the face of the goal from corner-back James McAuley.

However, just before the first water break, the goal Antrim were threatening did arrive - James McAuley’s surging run down the field led to a long ball to Eastwood. With runners charging through, he found Conor Stewart who charged through unmarked to slip the ball past a helpless Flynn in the Leitrim goal.

Ruairi McCann then scored a remarkable fifty that was almost out on the sideline to stretch the Antrim lead to three points and as Leitrim started to hit wide, points from McBride, Conor Murray and two from the deadly Eastwood suddenly had Antrim seven points clear.

Keith Beirne stopped the rot with a free after an off-the-ball foul on Tom Prior but Antrim responded with a Patrick McBride point, set up again by Eastwood.

It wasn’t all rosey for Antrim - Marc Jordan was obstructed as Antrim were seeking a goal and as Leitrim attempted to come out, Dermot McAleese pulled down a defender, ending up in the sin-bin to the home team’s displeasure, even as they led 1-11 to 0-7 at halftime.

Both sides made two changes at the break, Keith Keegan and Mark Diffley replacing Shane Moran and Aidan Flynn but Leitrim continued to miss chances. Beirne did put over a free on two minutes but a Donal Wrynn foul after Conor Murray’s shot came off the post resulted in an easy Eastwood score.

Incredibly, even with a man down, Antrim came out ahead on the scoreboard as they broke the Leitrim cover, Conor Murray surging through unopposed. His shot was brilliantly saved by Brendan Flynn but the ball looped up and Murray followed in to fist the ball to the net, leaving Leitrim ten points in arrears.

It wasn’t all plain sailing as Murray appeared to hurt himself in punching the ball to the net and he was soon replaced. Tom Prior did get his first point, well worked after a long ball to Keith Beirne but Eastwood came back with another free on 44 minutes.

Sub Conor Small stretched the lead to 11 points before sub Evan Sweeney kickstarted a remarkable Leitrim fightback. Perhaps Antrim were getting over-confident but a slack pass was intercepted and Sweeney swept over less than a minute after coming on and the same thing happened just after the water break, a sloppy Antrim pass, a quick ball to Sweeney and over the bar.

Almost straight away, an Antrim attack was broken up and Sweeney hit a monster from 50 yards to lift Leitrim spirits in massive fashion.

Incredibly after three points with his first three shots, he did follow up with a wide, the Glencar/Manor man found the net, Tom Prior finding Sweeney who drove the ball to the net between the keeper and the post gto cut the gap to five points with 15 minutes to go.

Antrim were now having wides and it got worse for the home side when the impressive Marc Jordan was sin-binned for protesting after a decision that should have gone Antrim’s way, Keith Beirne pointing after a long ball inside.

Odhran Eastwood steadied Antrim with a free but Tom Prior fisted over the bar, some felt he might have gone for goal but the Antrim defence was closing in rapidly on the youngster.

Ketih Keegan was lucky just to be yellow carded with four minutes of normal time left but Letirim were on a roll - Beirne put over another free after a silly foul on Oisin Madden and when Keith Beirne won a throw-ball after the Antrim keeper was penalised for delaying his kickout, Mark Plunkett took his pass to score.

Sweeney then fired over to leave a point in it with three minutes left and when another throw-ball arrived, Niall McGovern got on the end of it to tie the scores with less than two minutes of normal time left.

But Leitrim lost their advantage on the double soon after - Jordan came back on after his ten minutes in the sin-bin ended while Keith Keegan received his second yellow for a high challenge, meaning a two man swing in playing numbers and another brilliant point from veteran Paddy Cunningham.

Antrim looked as if they would hold out but their indiscipline came back to haunt them when a free was moved in and Beirne pointed to tie the scores with just over two minutes of added time played.

With four minutes due to be played, Leitrim put huge pressure on the Antrim defence but in a controversial decision, referee Kevin Faloon judged that Antrim sub Declan Lynch was pulled back by Leitrim sub Niall Brady, the Leitrim bench incensed as they felt the Antrim man had over carried the ball.

There was still lots of time to win the ball back but Antrim expertly kept the ball down one wing, never allowing Leitrim to get close enough to win the ball back and after about 60 seconds of possession, they swept the ball over to the far wing where sub Tomas McCann finished with all the calm assurance of the veteran he is to break Leitrim hearts.