Finding the key to Leitrim's Inception 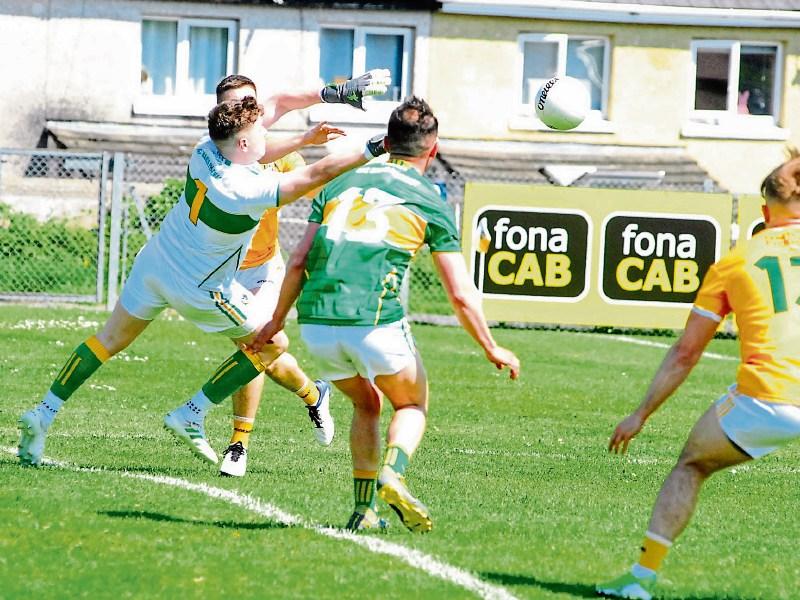 Keeper Brendan Flynn dives to stop a pass across the goalmouth before the ball was intercepted by Paddy Maguire during Leitrim’s Allianz NFL Division 4 clash against Antrim Picture: Willie Donnellan

Christopher Nolan is not a name you think of when Leitrim football is the subject. But ever since Sunday's thrilling, baffling and frustrating one point loss in Corrigan Park, the idea is firmly stuck in my head that the famed filmmaker might be just the man to sort the conundrum that is the Leitrim Senior football team!

Film buffs will know Nolan's work straight away, the British director's speciality being complex, mind-bending plots that examine our relationship with time and reality, so much so that the viewer often needs a second pass at his work just to make sense of the intricate plots.

His 2010 classic “Inception” is a masterpiece of storytelling, visual splendour and nerve-tingling suspense and I thoroughly recommend it to anyone who hasn't seen it. But be prepared for the confusion and the inevitable debate that comes with the movie's ambiguous conclusion!

Without giving too much away, the plot revolves around the concept that once an idea has taken hold in the brain, it is almost impossible to eradicate as Leonardo DiCaprio and his high-tech team attempt to plant an idea into the mind of an unsuspecting victim, an idea that will alter their reality and all without them knowing it!

Now at this stage, you're probably thinking Connolly has lost the plot, what the hell does “Inception”, reality and weird ideas have to do with Leitrim football and more specifically, what went down in Belfast last Sunday? But, in the irony of ironies for those who have seen Nolan's masterpiece, no matter how much I have tried to dismiss it, I can't get Nolan's concept out of my mind!

“Once an idea has taken hold of the brain, it's almost impossible to eradicate” is the movie's tagline and it might just sum up the Leitrim footballers right now!

How else do I explain what I witnessed in Corrigan Park? How else does a team go from one extreme to the other in the blink of an eye - questions that seem as impossible to answer as some of the concepts in Nolan's opus.

I could have recycled the old cliches of What If or a game of two halves. But time and time again, the concept of putting an idea in someone's head without them knowing it keeps coming back to me for I left sun-drenched Belfast wondering how exactly do you change the mindset of this Leitrim football team?

That the talent is there is not in doubt - nobody who saw the final quarter last Sunday can doubt that and there are have been flashes all throughout this League where the Green & Gold have produced bursts of wonderful free-flowing and high scoring football with intensity, passion and power - all the ingredients that you seek for any successful team.

Unfortunately, those flashes of brilliance have been just that - flashes, more often than not over-shadowed by even longer periods of the exact opposite of what the Green & Gold produced just minutes earlier as intensity is absent, precision is abandoned and confidence seeps away like the flowing waters of the Niagara Falls.

Sunday's 2-17 to 1-19 loss encapsulates Leitrim's performances in 2021 - meeting Antrim's fire with their own fire in the opening quarter, the Green & Gold held the edge in the contest but suddenly, Leitrim's swagger disappeared like a morning mist once Antrim pounced for their first goal, a goal that admittedly the Saffrons had been threatening.

What happened next only underlined the theory that many of Leitrim's problems stem from the mind - Antrim took over and bossed the game to such an extent that I was moved to remark out loud that the Green & Gold were displaying absolutely no intensity or pressure on the ball as Antrim advanced upfield more or less as they wished.

Just as well I didn't utter something a little stronger as I made the remark to my colleague Darren Mulvey of Shannonside in the middle of his updates from Corrigan Park and my bon mots were relayed to all and sundry listening in!

Unfortunately, the words were all too accurate as even with an extra man due to a black card, Leitrim were outscored, out-thought and simply outfought for the middle portion of this game.

And then it all changed - and boy did it change!

All that Leitrim weren't doing for the previous 40 minutes was now being executed with pace, with power and with belief.

Catalyst for this amazing transformation was Evan Sweeney's remarkable salvo of 1-3 off the bench, coming from five shots in just five minutes and, watching from the sidelines, you literally could see Terry Hyland's troops grow taller as they were infused with self-belief.

Antrim, it has to be said, contributed to their own travails by flooding their team with subs but it was hard to blame them for they looked home and hosed with 20 minutes to go. But that doesn't explain the mystery of Leitrim's remarkable transformation?

Is it simply attitude or, to quote that dreaded old banner that popped up in Pairc Sean Mac Diarmada before big matches, did the players suddenly “Believe”?

I say dreaded because I firmly believe that banner only served to reinforce a sense of inevitability for a generation of Leitrim footballers, the message emphasising a lack of belief to be honest. Modern sport is very much evidence based, not blindly taken on faith. It is a bit like me saying I'm going to win the Dublin Marathon when I haven't run a step in years but I believe!

Players believe when they see progress on the field and each step builds on the previous one. Of course you need faith but faith is built by performance and performance builds faith - it is why the Kerrys and Dublins of this world are serial winners.

It is the riddle Terry Hyland is looking to solve - Leitrim's players must believe they can perform but there must be a leap of faith to deliver on the talent in their ranks. Terry has done it before here in Leitrim - think back to 2019 when he took over the Green & Gold and talked about promotion from Division 4 within two years.

But promotion came quickly as momentum built and built. A draw against Mayo in the FBD League boosted morale and a thumping of Wexford in the first round of the Division 4 campaign fed and Leitrim were off to the races. Terry spoke with positivity, the players listened, fans started to dream and when performances reflected that new found belief, Leitrim suddenly became an unstoppable juggernaut, winning games they would normally have lost.

Right now, Leitrim have the raw tools to get out of Division 4, they undoubtedly had the bad luck to be in the stronger section of Division 4 but something is lacking and, maybe, this time it will take a leap of faith. Their flashes of brilliance scattered throughout this League amply demonstrate they can match Antrim, Louth and Sligo but producing that level of performance in each and every match is the challenge.

Or to paraphrase the aforementioned Mr Nolan, Leitrim's players must plant the idea that they can excel at this level deep in their heads. Once planted, that idea is almost impossible to eradicate and maybe then we will see the true potential of this Leitrim team!