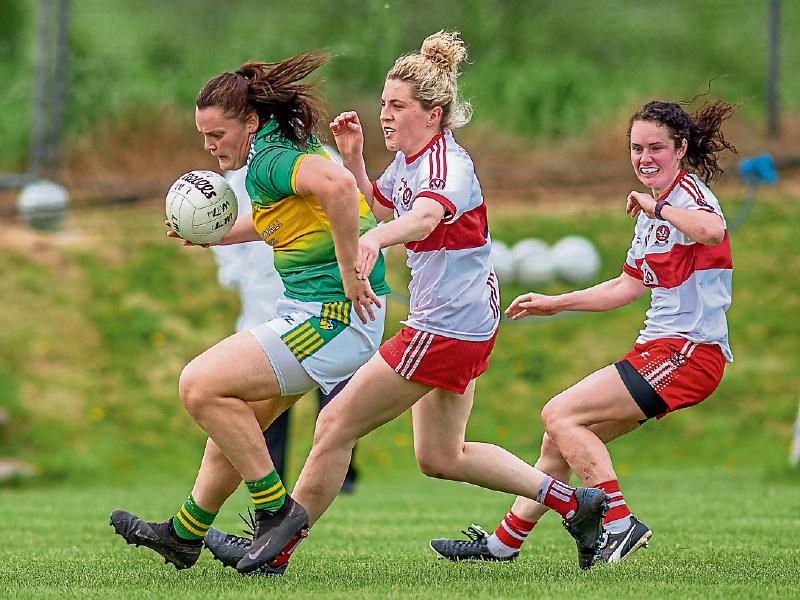 Leitrim decisively chalked up win number two over a Derry side whom they certainly subdued in Sunday’s somewhat one sided Lidl Ladies NFL Division 4A clash in Ballinamore.

Apart from the early stages of the game, Leitrim were always in command and the more the game wore on, the more Derry were forced to play second fiddle as the game lacked the intensity of Leitrim’s previous outing against Louth.

Leitrim were guilty of committing a number of errors in the first half, particularly in regard to turnovers, but Derry was unable to capitalise on any these mistakes. Nevertheless, Leitrim worked well as a cohesive unit throughout, with several of their players standing up and being counted whenever the need for it arose.

Derry started off impressively and more or less camped in the Leitrim half in the opening five minutes but despite all this pressure, the Oak Leaf county women still could not breach the Leitrim rear-guard, thanks to very effective and disciplined defending by the home side’s backs.

The early Derry onslaught came to an end after Michelle Guckian landed a point from a sixth minute free following what was Leitrim’s first incursion into enemy territory. Leah Fox whipped over a point shortly afterwards for Leitrim and added another on the nine minute mark.

The writing was already on the wall for the visitors and a minute later, Ballinamore’s Roisin McHugh finished off a Leitrim move to the Derry net. Laura O’Dowd and Shaylyn Ward then increased Leitrim’s advantage further when they whipped over a point each.

After their lively start, Derry were put on the back foot by Leitrim for most of the first quarter and it took the Oak Leaf women until 14th minute to register their first score when their livewire corner forward Orla McGeough fired over.

Michelle Guckian answered with a point at the other end and Orla McGeough quickly replied with a Derry point that left her side trailing by 0-2 to 1-6 when the first water break arrived.

After the resumption, Michelle Guckian extended Leitrim’s lead when she shot over a 21st minute point but Hugh Donnelly’s side had a let off at the other end two minutes later when Orla McGeough blazed a goal chance inches wide.

McGeough, who was fouled while executing her goal attempt, made amends when she converted the resulting 13 metre free.

Derry themselves had a let off when a 24th minute Michelle Guckian piledriver rebounded off the crossbar and was cleared to safety by the visitor's defence.

Before the interval Katie Holly for Derry and Michelle Guckian (free) for Leitrim traded points at opposite ends. When the short whistle was sounded Leitrim enjoyed a 1-8 to 0-4 advantage.

After the restart Laura O’Dowd got the scoreboard ticking over again for Leitrim when she fired over a 34th minute point. Four minutes later Orla McGeough answered for Derry. Michelle Guckian extended Leitrim’s lead with two more points from play by the 43rd minute.

Derry centre-back Anne Frizelle answered with a converted free just prior to the game’s second water-break at which stage Leitrim enjoyed an eight point lead.

Leitrim completely dominated the final quarter and hit seven points without reply from Derry. Athlone Town soccer star Muireann Devaney, who came on as a sub for the injured Leah Fox just prior to the second water-break, fired over 51st and 56th minutes points.

Michelle Guckian increased Leitrim’s lead further by the 57th minute after she pointed two frees. Devaney closed out the scoring for Leitrim with a point from play and then a pointed free, after regular free taker, Michelle Guckian had been substituted.

Derry closed out the scoring in the game with a late consolation point which was put over by Katie Holly from a free.